[Episcopal Diocese of Easter Oregon] A sixth generation Oregonian, the Rt. Rev. Rustin R. “Rusty” Kimsey was born on June 20, 1935 in Bend, Oregon, to Lauren Chamness Kimsey and Lois Elena (Moorhead) Kimsey. He died at home on April 10 at the age of 79. 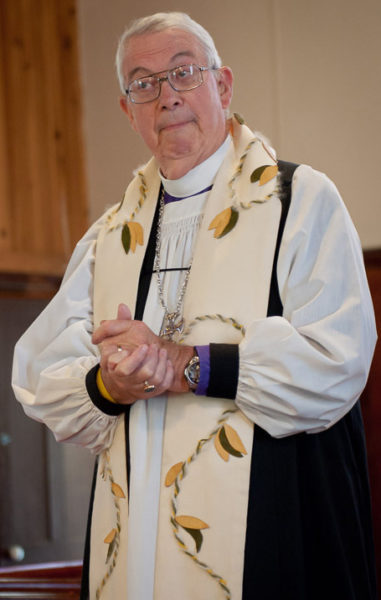 Educated in Bend and Hermiston public schools and the University of Oregon (B.S. 1957), Kimsey’s Christian formation was secured from boyhood at Ascension School and Conference Center in Cove, Oregon. Kimsey attended the Episcopal Theological School in Cambridge, Massachusetts, receiving a Bachelor of Divinity degree in 1960.

Ordained a deacon and priest that same year, Kimsey served churches in Redmond, Baker City and The Dalles. In 1969 he was appointed to the Episcopal Church’s Executive Council, the governing body of the Episcopal Church between triennial meetings of General Convention. He was re-elected to the council twice and served a total of thirteen years.

Active in community and regional concerns, Kimsey helped establish mental health programs for all ages, volunteered at the Regional Training Center for those with disabilities, served on the advisory board of Haven and was appointed by then-Gov. Victor Atiyeh to the Columbia River Gorge Commission.

In 1980 Kimsey was elected as the fifth bishop of the Diocese of Eastern Oregon, and on Aug. 4 he was consecrated at The Dalles High School Kurtz Gymnasium, followed by a gala procession to historic St. Paul’s Chapel on Union Street. “Old St. Paul’s” was soon to be the spiritual home and administrative center for the diocese. For 20 years, 59,000 square miles of the sacred turf east of the Cascades was “home” for Kimsey’s ministry to others in the name of Christ. He established and strengthened communities of faith to be more open and inclusive, waged battle with inappropriate leadership and abusive authority, enhanced ecumenical and interfaith relationships, encouraged congregations to become involved in their towns and villages as partners in responding to human need and social justice issues, reflecting the hospitality of Christ.

Kimsey served on several boards and commissions for the House of Bishops. The highlight was his chairmanship of the Episcopal Church’s Commission on Ecumenical Relations from 1994-2000.  During those years the Evangelical Lutheran Church in America and the Episcopal Church forged an agreement, Called to Common Mission, which brought these two faith communities into full communion.

Kimsey retired as bishop of Eastern Oregon in 2000. In 2005 he accepted an appointment as assisting bishop of Navajoland, retiring from that sacred duty in July 2006. Kimsey was appointed assisting bishop of the Diocese of Alaska in 2009 until Alaska chose its current bishop in 2010.

He is survived by his wife of 53 years, Gretchen (Rinehart) Kimsey; their children, Sean Kimsey of The Dalles and Bangkok, Thailand (Khing); Megan Jarman of Seattle, Wshington (Mark); Larry Parlin of Lyons, Oregon (Leisa); grandchildren, William and Lauren Jarman; an older brother, Lloyd Kimsey of Carlsbad, California; an aunt, Margaret Troedson of Pendleton, Oregon and several cousins, nieces and nephews.

A public service of Compline and Vigil will be held at St. Paul’s Episcopal Church on April 24 with the Rev. Patrick Bell officiating. A service of thanksgiving for Kimsey’s life and ministry will be held on April 25 at Calvary Baptist Church in The Dalles with diocese of Eastern Oregon Bishop Provisional Bavi “Nedi” Rivera officiating. Following a luncheon, the burial will take place at the Dufur Cemetery.

Editor’s note: A letter to the Diocese of Eastern Oregon from Gretchen Kimsey following the death of her husband is here. The Kimsey family kept the diocese updated about Kimsey’s health, including this last one posted March 16.