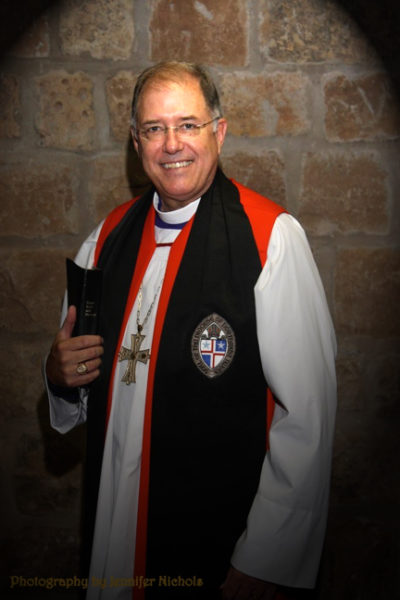 The Standing Committee selected Mayer in consultation with Presiding Bishop Katharine Jefferts Schori and in accordance with Canon III.13.1 of The Episcopal Church.

In a letter to the diocese sent on April 10, High said he is stepping down five months before the planned date of November 2015 following the death of his wife, Pat, in March.

“I feel very good about this decision of the Standing Committee, and I am in full support of their recommendation,” High said in his letter.

The Rev. Curt Norman, president of the Standing Committee of the Episcopal Diocese of Fort Worth, said, “When the Standing Committee began working on episcopal transition plans back in November 2014, our intention was to build on the faithful work of previous Standing Committees. Our predecessors chose quite well with bishops Gulick, Ohl, and High. Our work was cut out for us because each of those bishops was God’s choice for our diocese at the appropriate time. In recent months, we’ve had discussions with the Presiding Bishop’s office, as well as different bishops across the Episcopal Church. After considering which models of episcopacy would best support the mission and ministry of Fort Worth for the long term, this Standing Committee is firm in its resolve that God is calling Bishop Mayer to shepherd us into the next chapter in the life of our diocese. We could not be more excited.”

“It is with gratitude and a deep sense of calling that I accept your invitation to stand for election as your provisional bishop,” Mayer said. “I love Fort Worth and I am passionate about the proclamation of the Gospel as expressed in and through The Episcopal Church.”

Presiding Bishop Katharine Jefferts Schori said that High “has been a gift to the Diocese of Fort Worth and I am grateful for all his good work. I applaud his ability to recognize what is best for him and the diocese in this season of loss for him and his family. Bishop Mayer is an excellent choice to be part of this provocative — and I mean this in the best sense of the word — arrangement to serve the Church in new and imaginative ways. Bishop High, Bishop Mayer, and the people of both dioceses are in my prayers.”

Mayer is a native and lifelong Texan, born in Dallas and raised in Lubbock and Fort Worth. Mayer has long and deep connections to Fort Worth. He and his younger brothers were baptized and confirmed at St. Andrew’s Episcopal Church in Fort Worth, attended Fort Worth public schools, graduated from Southwest High School, and enjoyed memorable summer days playing ball at University Little League. Several family members continue to reside in the Fort Worth area.

In 1977, Mayer received his BBA Degree in Management from Texas Tech University. He and Kathy Kistenmacher met while attending Texas Tech, and were married in 1978. After 12 years of sales in the automotive aftermarket, the family moved to Austin where Mayer earned a Master’s in Divinity from the Episcopal Theological Seminary of the Southwest in 1992.

Mayer was ordained deacon in 1992 by the Rt. Rev. Donis Patterson and priest in 1993 by the Rt. Rev. James Stanton, both in the Episcopal Diocese of Dallas. He then served as curate at St. James Episcopal Church in Texarkana, before being called to the Church of the Heavenly Rest in Abilene, first as associate rector in 1994, and then as rector in 1995. He was consecrated as bishop of the Diocese of Northwest Texas on March 21, 2009 in Lubbock, where he and Kathy now reside. The Mayers have two grown children, both married, and two grandchildren.