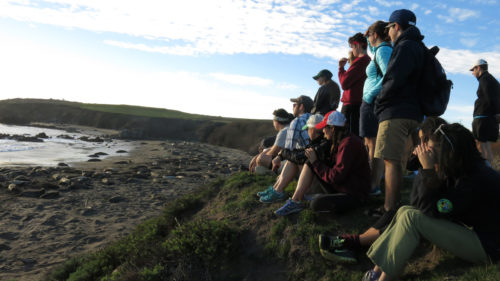 Students from Campbell Hall and St. Margaret’s Episcopal Schools observe elephant seals during mating season on the coast of Big Sur, California. From birth to death and everything in between, the full cycle of life was on display. Photo: Diocese of Los Angeles

[Episcopal News Service] Episcopalians old and young often turn to the phrase “this fragile earth, our island home” when talking about stewardship of the planet. It comes from Eucharistic Prayer C, found in the Book of Common Prayer.

Over the last 21 days, Episcopalians have been participating in 30 Days of Action, a campaign designed and initiated by the Domestic and Foreign Missionary Society to engage individuals and congregations in a conversation about climate change. (The Domestic and Foreign Missionary Society is the name under which The Episcopal Church is incorporated, conducts business and carries out mission.)

The campaign, which began with a live, webcast forum on March 24, culminates on Earth Day, April 22. Resources and activities for the campaign include advocacy days, bulletin inserts, stories, sermons and outdoor excursions.

The 30 Days of Action, as well as the fifth of the Five Marks of Mission, are a call to action to regain that trust and to come together in community to care for creation.

As James Pickett, a climate-change activist and young adult from the Diocese of Western Massachusetts, makes clear in a recent blog post, unless Anglicans and Episcopalians take seriously the fifth of the Five Marks of Mission, “To strive to safeguard the integrity of creation, and sustain and renew the life of the earth,” the other four marks are irrelevant.

“If we don’t treasure creation, the other marks of mission cannot be accomplished,” wrote Pickett.

Just talking about climate change and its related justice issues doesn’t cut it, according to Pickett and others; it’s about living the marks and putting faith into action.

Last fall, Pickett and other Episcopalians joined the more than 300,000 people from across the country and the world on the streets of New York for the People’s Climate March, the largest demonstration for climate action in history.

As evidenced in the activities and resources included and developed for the 30-day campaign, it’s impossible to have a conversation about climate change and not talk about justice issues implicit in the Five Marks of Mission.

“When The Episcopal Church adopted the Five Marks of Mission, I was struck by the practical nature of the language and its action-oriented invitation,” said lifelong environmentalist Bronwyn Clark Skov, the Domestic and Foreign Missionary Society’s officer for youth ministries. “I am especially thankful for the specificity of the Fifth Mark of Mission, ‘to strive to safeguard the integrity of creation and sustain and renew the life of the earth.’”

“It could be argued that this area of ministry is an undercurrent of the Baptismal Covenant, but these newer words open greater possibilities for imagining our role as Christian citizens caring for the earth, our home,” she said. “This is a wonderful teaching point when engaged with young people and discussing how their Christian identity might impact the choices they make.”

An environmentalist since her father encouraged her as a child, Skov recalled learning about recycling early on.

“I remember sorting newspapers to drop off at the once-a-month newspaper drive. I was taught to rinse out tin cans, remove both ends and carefully flatten the can on the rug on the kitchen floor, so as not to damage the linoleum beneath the woven fabric,” she said. “When engaged in ministry with young people, I name and claim this lifelong habit and invite young people to join me in my commitment to reduce, recycle and reuse those items that will not easily biodegrade in a landfill. This behavior has become a part of who I am, a piece of my personal identity.”

The Five Marks of Mission begin to address how Episcopalians can become environmental stewards and turn toward one another in community, rather than betraying the earth and turning away from one another, as the eucharistic prayer states.

Children and teenagers especially feel empowered by the language used in the marks, said Skov. She refers to them as a way to practice the vows made at baptism, and she invites young people to name and claim the ways in which they are already living some of the marks.

“The beauty of the fifth mark, treasuring the earth with intentionality, is a place where we can engage in our communities in partnership across denominational, religious and political divides,” she said. “Mission and ministry in this area [are] easy to embrace with school-age humans as they learn about the environment in classroom settings and can then see the intersection of their secular experience in the world with their values as a member of a community of faith.”

More than 1,000 high school-aged students attended last year’s Episcopal Youth Event in Pennsylvania, where climate change was among the issues discussed and where youth were becoming agents of transformation.

Americans’ views on climate change vary from state to state, town to town and sometimes family member to family member. Climate change is an increasingly charged political issue that often pits conservatives against liberals. At the same time, religious communities across the spectrum have joined in the call to reduce carbon emissions and to treat climate change as a moral issue.

In an interview with The Guardian that ran on the day of the climate-change-crisis forum in March, Presiding Bishop Katharine Jefferts Schori described climate change as a moral challenge already threatening the livelihood and survival of people in the developing world.

“It is certainly a moral issue in terms of the impacts on the poorest and most vulnerable around the world already,” she said.

Across the board, Episcopalians are taking that moral challenge seriously, including by contributing to the 30 Days of Action.

As the Rev. Margaret Bullitt-Jonas, missioner for creation care in the Diocese of Western Massachusetts, put it in a sermon written for the Sunday after Easter: “Climate change isn’t just an ‘environmental’ issue – it’s a ‘civilization’ issue. It’s not just about polar bears – it’s about where our grandchildren will find clean water. It’s about how societies will handle growing epidemics of infectious diseases such as malaria, cholera and dengue fever. It’s about where masses of people will go as rising seas drive them from their homes or when the rains don’t fall and the fields turn to dustbowls. It’s about hungry, thirsty people competing for scarce resources and reverting to violence, civil unrest or martial law in the struggle to survive.”

Formation resources focused on creation care
The Domestic and Foreign Missionary Society’s Lifelong Christian Formation Office and other clergy and lay Episcopalians active on climate-change issues have compiled comprehensive resources for environmental liturgy, including the 30 Days of Action.

“The formation offices have been talking about climate change and caring for the environment with children and their families for years,” said the Rev. Shannon Kelly, the Domestic and Foreign Missionary Society’s acting missioner for campus and young adult ministries. 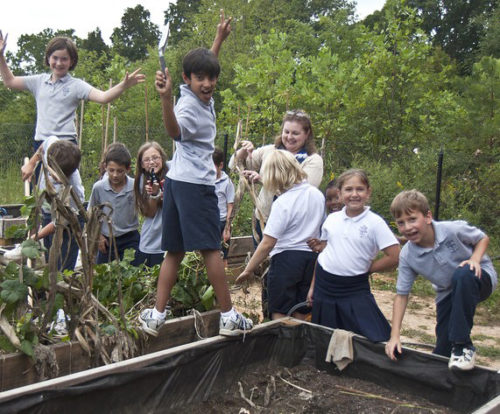 In Tennessee, exploring nature is becoming an integral component of learning to read.

In early June, the Diocese of East Tennessee will offer “Reading Camp Knoxville” to third- and fourth-graders who are both living in poverty and struggling to learn to read. As part of the program, the children, who come from urban areas, will go on afternoon field trips, hiking in wooded areas working in gardens, said Cindy Coe, who is on the planning committee and working with afternoon extracurricular activities.

“All of these activities are geared to fostering a sense of connectedness and appreciation of the natural world. The best way to do this is to actually get children outdoors, exploring nature,” said Coe, who last year received an environmental-stewardship fellowship from the Domestic and Foreign Missionary Society.

Through the fellowship, Coe is working to develop the next generation of leaders.

“This is not something that can be done by ‘book learning’ only,” she said. “Activities that encourage children to look closely at natural objects, mapping activities and identifying a special place outdoors are all effective ways to help children bond with nature. If a child is able to develop a bond with nature, chances are that the child will grow up with an appreciation of the environment and will care for the environment as an adult.”

Coe is working on developing new resources to introduce creation care to children and youth in The Episcopal Church, for use in camps, schools and parishes.

She hopes, she said, that all Christian formation programs in The Episcopal Church eventually will include some aspect of environmental stewardship.

In Virginia, Coe also is working with the planning team of Emmanuel Episcopal Church in Greenwood, Virginia, to design a vacation Bible school program based on care for creation and the Fifth Mark of Mission called “Earth, Our Island Home.”

“So the concept of creation care has a special meaning for the parish,” she said. “ Each day, children will participate in worship, hear a story based on creation care and take part in noncompetitive games designed to introduce environmental stewardship.”

Arts and crafts will embrace environmental stewardship, as children will be offered objects to “upcycle” and make into new creations, she said. “New life will be an important theme of the camp, connecting themes of recycling, composting and gardening with the Christian story of resurrection and new life in Christ.”

In the Diocese of Los Angeles, where the Rev. Andrew K. Barnett serves as the bishop’s chair for environmental studies, young people are learning to care for creation by learning to love it.

“I think that we will not fight to save a thing we do not love, by which I mean in order to empower people to care for ‘this fragile earth our island home,’ we first have to find that meaningful and valuable in a deep way, and talking about it doesn’t really cut it,” said Barnett, before the March 24 forum.

“So I have really made a significant priority of taking kids outside. So we take these wilderness retreats to places like Big Sur, Lake Lopez, Yosemite and Catalina Island. We have games, we go kayaking, we go hiking, we do service projects,” he said.

“The kids love it, they just love it. They light up because they are doing exactly what we need, which is community, connection and reference in these incredible, awe-inspiring places. So you don’t have to say this is important, this is beautiful, because it is immediately present or it’s just in your bones.”

Barnett serves as school chaplain at Campbell Hall Episcopal School in the Diocese of Los Angeles, where Bishop J. Jon Bruno and the Domestic and Foreign Missionary Society partnered to host the March 24 forum

Barnett talks to the students about climate change in stark terms, incorporating research and science — not to exaggerate, he said, but to name the severity of the threat.

“Kids can handle that truth. They don’t like things being sugar-coated. They prefer: ‘This is going to be the biggest challenge of your generation,’” said Barnett. “Our generation has abjectly failed in our attempt to reduce emissions. We talked about it a lot, we have a lot of meetings, but emissions keep going up.

“If you fail at this task, most other tasks won’t matter, because climate change affects almost everything worth caring about and, other than nuclear annihilation, presents the greatest threat to humanity that we’ve ever known.”

Editor’s note: An earlier version of this story misattributed the authorship of the words “this fragile Earth, our island home,” which appear in Eucharistic Prayer C. They were written by Howard E. Galley Jr.

— Lynette Wilson is a reporter and editor for Episcopal News Service.