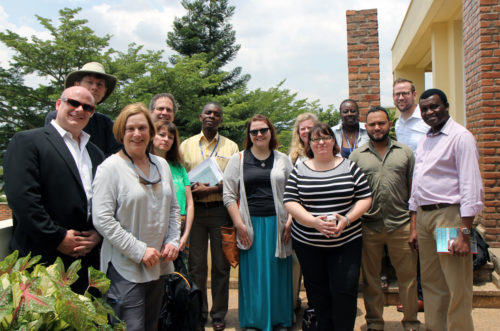 [Episcopal News Service] The Episcopal Church has been resettling refugees for 75 years, working with local congregations and resettlement agencies across the United States to welcome some of the most vulnerable people in the world who’ve fled violence, war, political, ethnic and cultural oppression.

In early March, eight Episcopalians traveled to Kenya and Rwanda to learn about refugee resettlement today through the lens of Congolese refugees on a #ShareTheJourney pilgrimage organized by Episcopal Migration Ministries, the Domestic and Foreign Missionary Society’s refugee resettlement service.

The Domestic and Foreign Missionary Society is the legal and canonical name under which The Episcopal Church is incorporated, conducts business and carries out mission.

“Our hope,” said Episcopal Migration Ministries Director Deborah Stein, “is that the participants will be able to share the enthusiasm they have shown throughout this pilgrimage with people in their parishes, in their communities, in their dioceses, and become champions and advocates for refugees: to communicate to the broader church about the wonderful opportunities for Episcopalians to be involved in the life-saving work of refugee resettlement, and ultimately that Episcopalians will see a place for themselves in this work.”

Alyssa Stebbing, outreach director for Trinity Episcopal Church of The Woodlands in the Diocese of Texas, came into the pilgrimage with an awareness about refugees that heightened through the journey.

“This experience has really taken the blinders off,” said Stebbing, who plans to engage with the interfaith community in greater Houston and share what she learned on the pilgrimage.

Of the 15.5 million refugees worldwide, less than 1 percent will be resettled, with more than 75 percent of those coming to the United States. 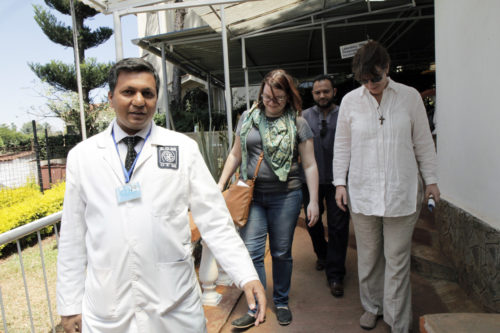 In 2014, Episcopal Migration Ministries and its partners helped to resettle 5,155 of the tens of thousands of refugees who came to the United States through the United Nations High Commissioner for Refugees’ (UNHCR) screening process. They’ll work to serve as many people this year, as the United States plans to resettle 70,000 refugees.

Many of those refugees will come from the Democratic Republic of Congo. Over the next several years, UNHCR plans to resettle 50,000 refugees from the Congo, with 80 percent to be resettled in the United States.

The March 2-13 pilgrimage, funded by an Episcopal Church Constable Fund grant, educated the participants about the plight of refugees and the refugee process so that they might share their experience with their churches, dioceses and communities.

In Rwanda, they visited Gihembe, a refugee camp housing 14,500 refugees from eastern Congo. There, they heard questions and concerns from refugees in a town hall setting. The pilgrims also learned about the refugee-resettlement process from the overseas perspective through meetings with the UNHCR, Church World Service’s Africa Resettlement Support Center and other non-governmental organizations. 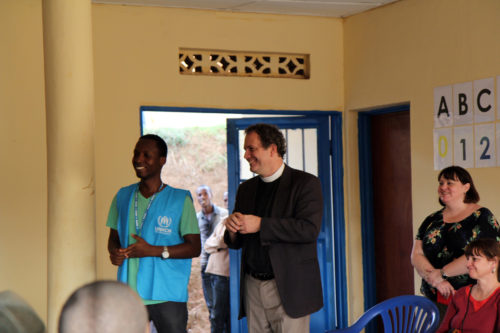 The Rev. Canon Frank Logue, canon to the ordinary in the Diocese of Georgia, speaks to refugees during a town hall-style meeting in Gihembe Refugee Camp. Photo: Lynette Wilson/ENS

For the Rev. Canon Frank Logue, canon to the ordinary in the Diocese of Georgia, to be able to meet with refugees and listen to their frustrations regarding the resettlement process was informative.

“I think it’s hard for any of us to appreciate what it’s like to flee your country, what it means to be a refugee, so to have had the experience of meeting and talking to refugees was helpful,” said Logue, who journeyed with his wife, Victoria.

The visit to the refugee camp included a tour of its medical clinic, an elementary school classroom, a women’s empowerment initiative and an ESL classroom for refugees approved for resettlement.

Meeting 10 HIV-positive women at the refugee camp who find hope in growing mushrooms made a big impact on Cookie Cantwell, youth ministries coordinator for Province IV.

“Once you’re exposed to something that you know will forever change your perspective, you have to share it,” said Cantwell, who is from the Diocese of East Carolina. “Once you’ve been touched, you have to make a decision about what you’re going to do about it.” 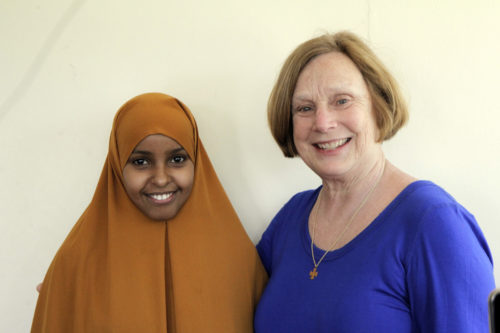 A Somali refugee woman who works as a community health worker poses with Cookie Cantwell, during a visit to Refuge Point, an organization that works to empower some of the most vulnerable refugees in Nairobi and other locations worldwide. Photo: Lynette Wilson/ENS

For Cantwell, it means sharing the women’s story. “They’re living, they’re not dying,” she said.

Many of the pilgrims blogged about their experiences.

“One of the things we asked of all of the pilgrims that have participated in the #ShareTheJourney trip is that, when they come home, they use their experience to talk to as many people as possible to share what they learned: to become advocates for refugees, to visit a local EMM affiliate office, to see what happens on the receiving end to see what they can do to share the information they learned while they were in Nairobi [in Kenya] and Rwanda,” said Stein.

Jessica Benson of the Diocese of Idaho had built a relationship with a Congolese family resettled to Boise through the Agency for New Americans. But seeing resettlement from the overseas end was a completely different experience, she said.

The pilgrims learned, for example, that once a family is referred for resettlement and begins the lengthy process of background, security and medical checks, any change in the family’s status, such as the birth of a child, can delay the process.

“One of the things that stuck in my mind is that infants are screened at the level of adults,” said Benson, adding she also didn’t know large numbers of urban refugees lived in cities, outside the camps.

Before the pilgrimage had ended, Benson already had reached out to a state legislator to schedule a meeting. She also planned to speak to students in the public-school system where the numbers of refugee students have increased to educate them about the resettlement process, she said. 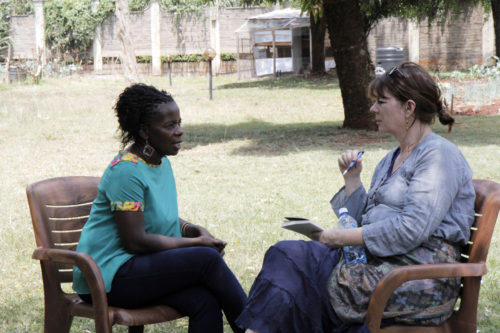 Alice Eshuchi, country director for Heshima Kenya, talks with Alyssa Stebbing, outreach director for Trinity Episcopal Church of The Woodlands in the Diocese of Texas, during a visit to Heshima’s operations office in Nairobi. Heshima Kenya specializes in identifying and protecting unaccompanied and separated refugee children and youth, especially girls, young women and their children living in Nairobi. Photo: Lynette Wilson/ENS

After visiting the refugee camp in Rwanda, the pilgrims visited Heshima, an urban program in Nairobi, Kenya, that empowers refugee girls and young women, many of whom who have lost or been separated from their families.

For Spencer Cantrell, gender violence fellow at the National Immigrant Women’s Advocacy Project in Washington, D.C., the contrast between the refugee camp and the urban program was stunning. In the camp, she visited the dwelling of a man who had lost all hope, despite his family having been resettled to Mississippi, she said. That was hard to reconcile with the hope emanating from the positive attitudes of the girls and young women in Nairobi, many of them survivors of trauma and sexual violence and many of them teenage mothers, she said.

“I’m looking at ways to share this with the church,” said Cantrell, a former Young Adult Service Corps missionary to Hong Kong now living in the Diocese of Washington.

To walk into a classroom in the refugee camp full of eager young boys, four years below grade level and sharing two or three books, was heartbreaking for the Rev. Burl Salmon, middle school chaplain and dean of community life at Trinity Episcopal School in the Diocese of North Carolina. Yet he was encouraged by the rapport the teacher had with his students, he said. “He saw education as their ticket.”

“Education is universal,” said Salmon. “For one it’s a lifeline, and for the other it’s a given.”

Back in the United States, besides engaging with an Episcopal Migration Ministries affiliate office, ways the pilgrims and other Episcopalians can continue to learn about and advocate for refugees include: organizing an event for World Refugee Day, which takes place annually on June 20; encouraging a congregation to co-sponsor a refugee family; sharing their experiences with refugees at The Episcopal Church’s General Convention; advocating for refugees at the local and state level by scheduling appointments with elected officials and speaking at civic gatherings; and becoming a member of the Episcopal Public Policy Network, which engages in public-policy advocacy at the federal level.

One of the things The Episcopal Church, which is present in multiple countries, should do is to encourage other countries to increase the number of refugees they resettle, said the Rev. Canon Scott Gunn of the Diocese of Southern Ohio, one of the pilgrims and the executive director of Forward Movement, a Cincinnati, Ohio-based ministry of The Episcopal Church that encourages discipleship.

There are 2.7 million refugees and asylum seekers across East Africa, the Horn of Africa and the Great Lakes region. Ethiopia and Kenya host the majority of people fleeing violence and political instability in Somalia, South Sudan, Sudan, Eritrea and the Congo.

“Ninety-nine percent of refugees will not be resettled,” Gunn said. “We also need to do whatever we can to influence the stabilization of conditions in East Africa; one country is taking another country’s refugees.

“If 2.7 million people could be repatriated, everybody wins. It’s a morally outrageous shell game that’s being played with people’s lives,” said Gunn. “No human being should ever have to utter the words: ‘I have no hope.’”