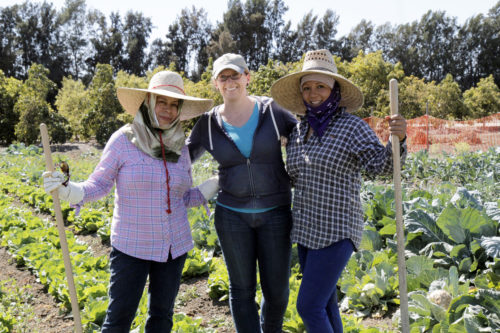 [Episcopal News Service] Flying over Los Angeles, the city’s vastness comes sharply into focus. Its low buildings and sun-bleached concrete stretch on forever, but look closer at the greater metropolitan area, in the communities, schools and churchyards, and you’ll see gardens.

The gardens are part of the Diocese of Los Angeles’ plan to address food security in the communities served by its parishes, and one of the ways it cares for the environment.

In one of the nation’s largest cities in the top-producing agricultural state, people don’t have access to fresh fruits and vegetables. Through Seeds of Hope and The Abundant Table, the diocese is doing something about it.

Three years ago, Los Angeles Bishop J. Jon Bruno decided to get serious about addressing food insecurity in his diocese and created Seeds of Hope, which works with congregations, communities and schools to turn unused land into productive gardens and orchards to provide healthy, fresh food to local residents.

“In Los Angeles, access to nutritious food is a luxury,” said the Rev. Andrew K. Barnett, the bishop’s chair for environmental studies and food justice. “If you live in a low-income community, it’s much easier to get fast food.”

“We looked at that and said, ‘That’s unacceptable; that’s wrong.’”

Up until the mid-1950s, “Los Angeles County was the main agricultural producing county … in the world,” said Tim Alderson, executive director of Seeds of Hope, in a Diocese of Los Angeles video. At the time of the diocese’s founding almost 120 years ago, 40 percent of the population was directly involved in agriculture.

“Today, 1 percent of the population is involved in feeding the rest of us, which has created a real disconnect between us and the sources of our food, and that has led to obesity, diabetes, other metabolic disorders that affect us across the scale,” said Alderson.

“We have people in our diocese who don’t know where their next meal is going to come from and those same people are obese.”

Seeds of Hope takes a diocesan approach to producing and distributing food, and also serves to develop the resources necessary to empower parishes, schools and others to begin growing food. The intention is to make a direct impact on the health and wellness, both physically and spiritually, of people in the community.

“Everything lands disproportionately on people living in poverty,” said Alderson in an interview with Episcopal News Service following a March 24 forum on the climate change crisis. “We decided we needed to address this serious issue in the underserved communities that we serve.”

In contrast to other nations, Americans who live in poverty are more likely to be obese, and more likely to live in food deserts, or areas where access to fresh food is limited.

Los Angeles County covers more than 4,000 square miles and is home to 10 million residents; 1.8 million, or 18 percent, live in poverty.

The diocese – which stretches north to the city of Santa Maria, in Santa Barbara County, to San Clemente, the southern-most border of Orange County, east to the Arizona border, and west to the Pacific Ocean – covers a large geographic area and is home to 139 congregations, 40 schools and 20 institutions. 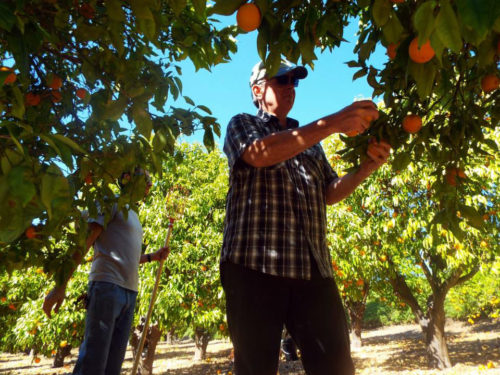 One hundred and eight congregations participate in Seeds of Hope by either growing or distributing food or both, and half of its schools have gardens. Through a contract with the Los Angeles County Department of Public Health, it provides cooking/nutrition and fitness education to low-income residents at 17 churches in underserved communities, said Alderson.

Since its inception in January 2013, Seeds of Hope has grown from one staff member to 16, including three full-time and three part-time positions, and 10 interns, and through combined efforts is producing 50 tons of fruits and vegetables – 800,000 servings – annually and is providing food to approximately 30,000 households monthly through food pantries.

“We also serve more than 30,000 meals each month to people in need at our various meal programs,” said Alderson. 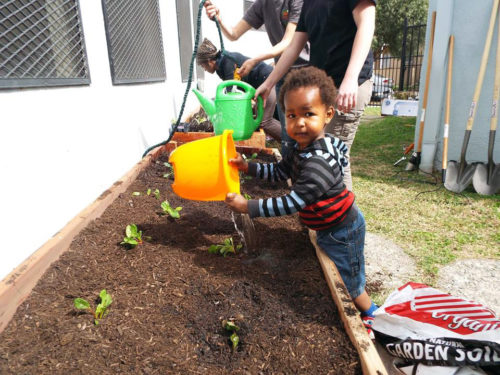 Garden planting at Christ the Good Shepherd Episcopal Church in Los Angeles. Photo: Courtesy of the Diocese of Los Angeles

In addition to feeding the 150 members of their community-supported agriculture program, the farmers sell fresh produce to local schools and donate 10 percent of their harvest to a food bank.

The Abundant Table is more than a farm, however; it’s also a church, an internship program, and a place where students, youth groups and others can gain a hands-on learning experience about food. Its mission is rooted in food justice – ensuring that people have access to fresh, nutritious foods, that farmworkers’ rights are respected and that the workers are paid a fair wage.

“A foundational value of us is food justice,” said Sarah Nolan, director of programs and community partnerships.

An ecumenical and interfaith ministry of the Episcopal and Lutheran churches, the farm church invites people of all faith traditions to explore spirituality in connection with the land.

“We’re really looking at developing an ecosystem that creates an economically viable church and farm model,” said Nolan, adding that it’s experimental and that they are looking at how the farm supports worship and vice versa.

“Abundant Table is a community of practice that embodies a joyful and prophetic witness to the power of right relationships, not only to each other, but also with the land and with food,” said the Rev. Thomas Brackett, the Domestic and Foreign Missionary Society’s missioner for new church starts and missional initiatives, in an e-mail message.

“[It models] wise actions that sustain intentional communities rooted in the ancient practices of following Jesus. It was the discernment of our First Mark [of Mission] funding council that we probably need 1,000 more Abundant Table ministries across the U.S. Sarah Nolan and Amy Grossman are out in front on a path that we will all need to eventually make by walking!”

Last year, the Domestic and Foreign Missionary Society awarded Nolan an environmental stewardship fellowship through which she is working to build a national Episcopal network around food and agricultural ministries.

“There are so many people doing things already,” she said, in addition to food banks and gardens. The Beecken Center of The School of Theology at Sewanee, for example, has created the Faith Farm and Food Network.

One of the main questions she and others are asking is: “If The Episcopal Church looked at itself as a food system, what would we do differently?” Then subsequent questions might be: How would we use camps and conference centers differently? How would we connect churches with new and beginning farmers? How are food banks connecting with local farms? How does liturgy emerge out of what we are doing?

In California, which is entering its fourth year of drought and where farmers have been forced to leave crops to rot in the fields, talking about food justice is an entry point for beginning discussions about ways to address climate change.

“I think the power of connecting with where one’s food comes from and also participating in the growing process creates a relationship to the earth that forms a level of humility and wonder for God’s creation. In many ways, we know that it is difficult to express love and care for anyone or anything without a relationship,” said Nolan.

“I don’t believe we can even begin to address the issues surrounding climate change, without developing a relationship to the earth and the people most impacted by the consequences of global warming,” she added. “I hope that every child, youth and adult that visits our farm experiences one step, if not more, in restoring a relationship with the plants, bugs, soil, people and all the complex relationships that make up our planet. For the Abundant Table it is the work of the church (especially a Eucharistic church) to help restore these relationships through the growing and sharing of food and invite others to join us in that work.”

Editor’s note: Every Friday during these 30 Days of Action, we invite you to explore how the growing and sharing of food in your family, community and culture bring you closer God’s invitation to all of us to “till and keep” the earth.