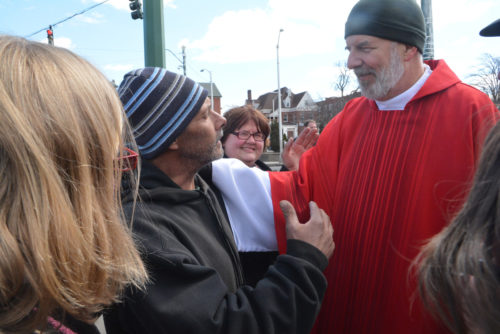 Ken Baker, a resident of Hartford, Connecticut, greets Bishop Jim Hazelwood, right, of the New England Synod of the Evangelical Lutheran Church in American, and asks him for a hug. The bishop was with a group of clergy returning from a visit to Hartford Hospital. Photo: Marc Yves Regis/Diocese of Connecticut

[Episcopal News Service] Episcopal Church clergy in two dioceses joined with their neighbors for unique variations on the Holy Tuesday tradition of renewing their ordination vows.

In the Diocese of Connecticut, Episcopal and Lutheran clergy visited and prayed at four public sites in the state capital city of Hartford before their renewal service.

A group of about 60 clergy, including Connecticut Bishop Ian T. Douglas and Bishop Suffragan Laura J. Ahrens along with Bishop Jim Hazelwood of the New England Synod of the Evangelical Lutheran Church in America started the day with a renewal of their baptismal vows and a service of Communion in Bushnell Park, a large park in the city near the capitol. 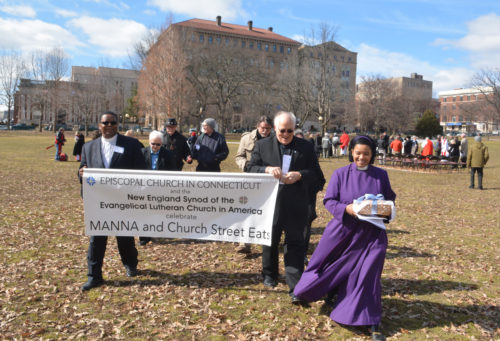 Carrying their banner in front, one of the four groups of clergy leave Bushnell Park in Hartford, Connecticut, after a communion service to visit the Manna Community Meals site. On the right is the Rev. Miguelina Howell, the vicar of Christ Church Cathedral, carrying a gift of bread for people at the site. Photo: Marc Yves Regis/Diocese of Connecticut

“Are we willing to be present, listen, pay attention and partner with others in the journey?” Ahrens asked during her sermon preached the park. “Being about seeing Jesus in the other, building community, connections and relationships.”

Afterwards the clergy divided into four groups, each to visit one of four nearby sites: the Hartford Public Library, Hartford Hospital, Capital Community College, and the Manna Community Meals and Church Street Eats program based at Christ Church Cathedral.

“We seek as Lutheran and Episcopal sisters and brothers together, to be a visible presence in the city of Hartford,” the three bishops wrote in an invitation to the gathering. “We offer our prayers and our presence in the neighborhoods where we see people creating spaces that care for, empower and strengthen all people. By visiting these places with our prayer and our presence we both affirm their work, and see possible partnerships and collaboration with those who are about the work of God’s mission, sharing God’s love.”

The bishops said they hoped the visits would encourage the clergy to see their own neighborhoods in a similar way.

After the visits, the Episcopal clergy gathered at the round noon they reconvened at Christ Church Cathedral for more prayer and to talk about where they’d seen Jesus that day. They then renewed their ordination vows and received newly blessed holy oils.

In the Diocese of Atlanta, clergy gathered to renew their vows at The Temple, a Reform synagogue in Midtown Atlanta.

Atlanta Bishop Rob Wright, bishop of Middle and North Georgia, arranged to hold the Holy Tuesday service at The Temple. Rabbi Peter S. Berg was the preacher for the service. 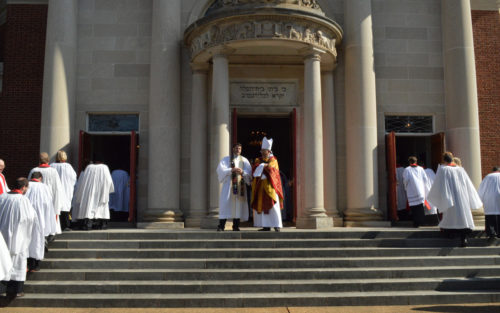 “The Temple is our neighbor, and has been a friend of the Christian community in Atlanta for many years,” Wright said in a press release. “It represents the faith Jesus was formed by.”

Wright and Berg worked out the arrangement last summer when they worked side by side on a community summer meal for kids service project at The Temple.

“In a world of religions in conflict, we can rejoice in an opportunity to celebrate that which binds us together,” Wright said.

“We are honored to host the Episcopal Diocese of Atlanta for the annual reaffirmation of ordination vows at The Temple,” Berg said. “This is an historic moment for our interfaith community. We hope this will be one of many opportunities for our communities to study and pray together… and we applaud all of the clergy who are reaching this significant milestone.”

A local National Public Radio station report on the service is here.

More than 200 clergy are part of the Diocese of Atlanta, which stretches from Columbus to below Macon and east to near Augusta and all parts of Georgia north of that line. There are 110 Episcopal worshiping communities within the diocese.