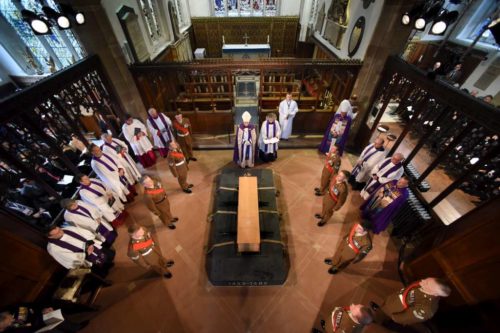 Clergy and an honor guard surround Richard III’s casket March 26 prior to it being buried in Leicester Cathedral. Photo: King Richard in Leicester website

[Episcopal News Service] History buffs from all over the world joined royal, civil and ecclesiastical representatives in Leicester, England, on a rainy March 26 for the reburial of a king whose bones were found in 2012 under a parking lot.

Richard III, the last Plantagenet king of England, died aged 32 on Aug. 22, 1485 during the Battle of Bosworth.

His skeleton was found in 2012 in the ruins of the Greyfriars priory buried beneath a parking lot in what the New York Times called “one of the most astonishing archaeological hunches in modern history.” 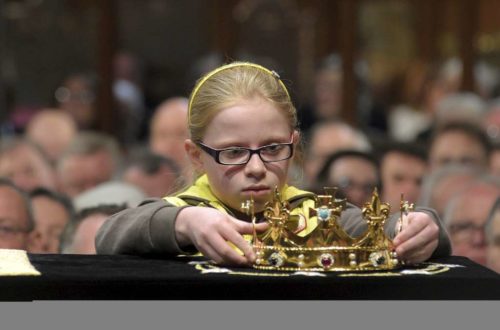 Emma Chamberlain, 9, from Aylestone (a suburb of Leicester) and a member of the 1st Aylestone Brownies, places a crown on Richard III’s casket March 22 after it was brought to Leicester Cathedral. Photo: King Richard in Leicester website

During the somber ceremony based on Morning Prayer (order of service here), Welby censed Richard III’s casket and blessed it with holy water.

“As we return the bones of your servant Richard to the grave, we beseech you to grant him a quiet resting place,” Welby prayed.

Welby also sprinkled the coffin with soils from Fotheringhay, Middleham and Bosworth. Richard III was born at Fotheringhay Castle in Northamptonshire and members of his family are buried at the local church. Middleham in Yorkshire is where Richard met his future wife Anne.

“Today we come to accord this King, this child of God, these mortal remains, the dignity and honor denied them in death,” Stevens said during the homily. Members of the team that found Richard’s remains have said that his initial casket-less burial was done in a hurried fashion in a too-short grave, causing the king’s head to need to be pushed askew.

Also during the service, actor Benedict Cumberbatch read “Richard,” a poem written for the occasion by Poet Laureate Dame Carol Ann Duffy. Cumberbatch will play Richard III in the BBC series “The Hollow Crown: The Wars of the Roses.” He has also been identified as a third cousin, 16 times removed of Richard. A YouTube clip of Cumberbatch’s reading during the service is here. 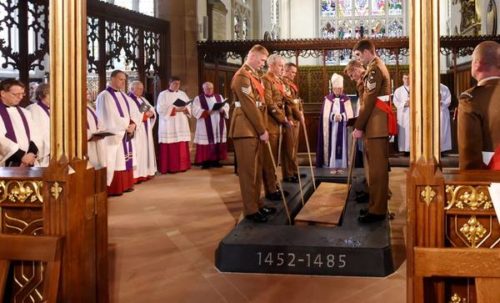 The casket was lowered into a tomb within an ambulatory (a walking space) between the newly created Chapel of Christ the King at the east end of Leicester Cathedral and the sanctuary, a location not far from where Richard’s remains were found. The stone used in the design of the tomb is a Swaledale fossil stone, quarried in North Yorkshire, that contains fossils of long-dead creatures. It is topped with a Kilkenny marble plinth bearing Richard’s name, dates and motto.

The New York Times noted that some saw Richard’s reburial in an Anglican cathedral and Welby’s participation as an anomaly, since Richard was a devout Roman Catholic who died well before Henry VIII’s break with Rome in the 1530s.

Cardinal Vincent Nichols, the Roman Catholic Archbishop of Westminster, preached at a March 22 service of Compline (order of service here) at Leicester Cathedral when the king’s mortal remains were received. The remains were carried from the University of Leicester by the team who discovered them.

Many heard the cardinal’s sermon “as a deft message of reconciliation to the contending schools of thought about Richard’s legacy as king,” according to The New York Times article. Richard has been cast as a hunch-backed villain who killed two young princes but who also reformed parts of English law. Nichols said he was also a man who prayed, noting in a Vatican Radio interview that Welby would bring Richard’s prayer book with him to the March 26 service. The book contained Richard’s annotations and a prayer the king wrote. 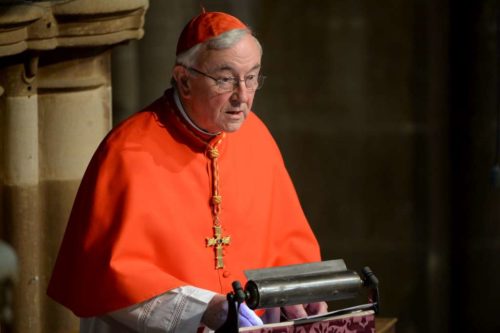 Cardinal Vincent Nichols, the Roman Catholic archbishop of Westminster, preached at a March 22 service of Compline at Leicester Cathedral when Richard’s remains were received. Photo: King Richard in Leicester website

Nichols cautioned in his sermon that power in Richard’s time was “invariably won or maintained on the battlefield and only by ruthless determination, strong alliances and a willingness to employ the use of force, at times with astonishing brutality.”

On March 23, Nichols also presided at an evening Requiem Mass for the repose of the soul of Richard III in Holy Cross Priory , a Roman Catholic Dominican priory in Leicester. In his homily, the cardinal called the king “a man of anxious devotion.” Nichols vested for the Mass in the Westminster Vestment, a chasuble believed to be from Richard’s royal wardrobe. Tradition says it was worn by the Benedictine monks of Westminster Abbey during Richard’s reign.

In the medieval rite of reburial, before re-interment the person’s remains were placed in the church while its usual pattern of worship continued, according to a March 25 press release posted on Welby’s website.

This same pattern was being followed in the cathedral this week: they were in repose until March 26 when they were re-interred.

BBC News reported that more than 35,000 people lined the streets in parts of Leicester March 22 to see the cortege bring the king’s remains to the cathedral. More than 20,000 people visited the cathedral to view the casket containing the king’s remains, the news service said. Viewing times were extended on March 24 and 25 to accommodate the crowds, according to the King Richard in Leicester website. 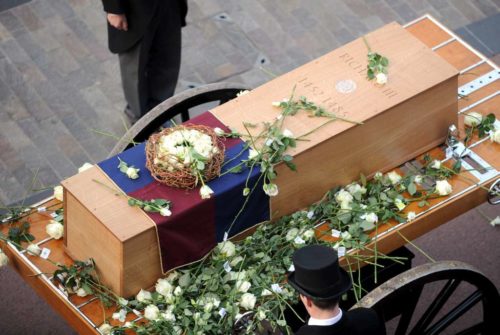 People in the streets of Leicester tossed white roses on his casket on its way to the Leicester Cathedral. Richard was the head of the House of York, which had the white rose as its symbol. Photo: King Richard in Leicester website

The lead-lined casket, bearing the inscription “Richard III 1452-1485,” was designed and made of English oak and English yew by Michael Ibsen, a Canadian-born cabinetmaker whose DNA helped identify the remains of King Richard III. Ibsen is a 17th-generation descendant of Richard’s older sister, Anne of York. He has attended the week’s services in Leicester. 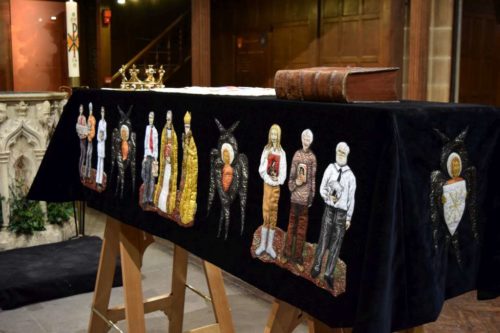 A pall designed by artist Jacquie Binns covers the casket during the public viewings. Photo: King Richard in Leicester website

Artist Jacquie Binns designed a black pall for the casket that is decorated with embroidered images of a knight in armor; King Richard’s queen in heraldic robes; the faces of archaeologists Sir Peter Soulsby and Richard Buckley, Philippa Langley (a screenwriter who instigated the search for the king’s remains) and the Very Rev. David Monteith, the dean of Leicester, among others. It was draped over the casket by the descendants of four peers who fought both for and against Richard III at the Battle of Bosworth in August 1485, according to the Leicester Mercury newspaper.

Six days of liturgies and celebrations will end March 27 with a “Service of Reveal of the Tomb and Celebration for King Richard III” (order of service here) at noon local time followed by a series of celebratory events taking place in and around the cathedral quarter, Leicester Glows featuring more than 8,000 small fires around Jubilee Square and Cathedral Gardens, illuminating the area with “fire sculptures” and culminating in a fireworks display from the cathedral roof.