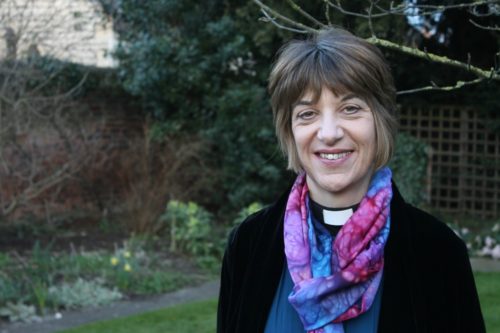 [Episcopal News Service] The Ven. Rachel Treweek has been appointed as the next bishop of the Diocese of Gloucester and will become the first female to serve as a diocesan bishop in the Church of England.

The news comes one day after the Rev. Alison White was named as the next bishop of Hull and two months after the Rev. Libby Lane was ordained and consecrated as bishop of Stockport. Those two appointments are to serve as suffragan (assistant) bishops.

Treweek, 52, currently serves as archdeacon of Hackney, a borough in northeast London. She will succeed the Rt. Rev. Michael Francis Perham, who resigned as bishop of Gloucester on Nov. 21, 2014.

“It is an immense joy and privilege to be appointed as the bishop of Gloucester,” said Treweek, according to an announcement on the Diocese of Gloucester’s website. “I am surprised and, I have to admit, even a little daunted by the prospect, but my overwhelming feeling is one of excitement to be coming to join with others in sharing the love of Jesus Christ with the people of this diocese.”

Treweek, who studied at Reading University and trained for the ordained ministry at Wycliffe Hall, Oxford, said she is “looking forward to encouraging Christians to speak out with confidence about their faith and the good news that the Gospel brings. It will be my privilege to work with churches as we connect with people, wherever they are and whatever their concerns.”

From 1999 to 2006 she was vicar at Saint James the Less, Bethnal Green, in east London, and continuing ministerial education officer for the Stepney Episcopal Area. From 2006 to 2011 she was archdeacon of Northolt in the Diocese of London. She has served as archdeacon of Hackney since 2011.

Treweek is married to Guy, priest-in-charge of two parishes in central London. Her interests include conflict transformation, walking and canoeing.

“My calling to the role of bishop has been shaped by human encounter,” she said. “I believe profoundly that relationship is at the heart of who God is. I have been with people through the joys and pains of their lives and it is these experiences that I will reflect upon as I take up this new role.”

The appointment comes following more than a decade of often-emotional debate, accompanied by various stages of legislative action, about opening the episcopate to women. The Church of England voted in July 2014 to allow women to become bishops, a decision that was later approved by the U.K. Parliament and given the assent of Queen Elizabeth II. The approvals were required because the church’s decision effectively changed English law. (The Church of England is an officially established Christian church with Queen Elizabeth II as its supreme governor.)

Lane – who was ordained and consecrated as the first female bishop in the history of the Church of England in January when she became the eighth bishop of Stockport, a suffragan (assistant) bishop in the Diocese of Chester – described Treweek as “an exceptional priest whose leadership is well proven. She is both genuinely caring and deeply insightful. It has been an honor to serve alongside Rachel as regional representatives in the House of Bishops, and I rejoice that she takes her place there as of right.”

Archbishop of York John Sentamu said the appointment fills him “with joy and thanksgiving to God for her partnership in the Gospel. Rachel is a priest who cares deeply about the good news of God in Jesus Christ and has a deep love for people and, in the words of St. Paul, she is always, ‘outdoing others in showing honor.’ She builds strong relationships with people and is an experienced reconciler. My prayer for her is that God will keep her in the joy, simplicity, and compassion of Christ’s Holy Gospel.”

The Diocese of Gloucester shares a three-way companion relationship with the dioceses of El Camino Real in the U.S.-based Episcopal Church and Western Tanganyika in the Anglican Church of Tanzania. El Camino Real Bishop Mary Gray-Reeves is the seventh woman to serve as a diocesan bishop in The Episcopal Church.

A video message from Treweek is available on the Diocese of Gloucester’s website here.