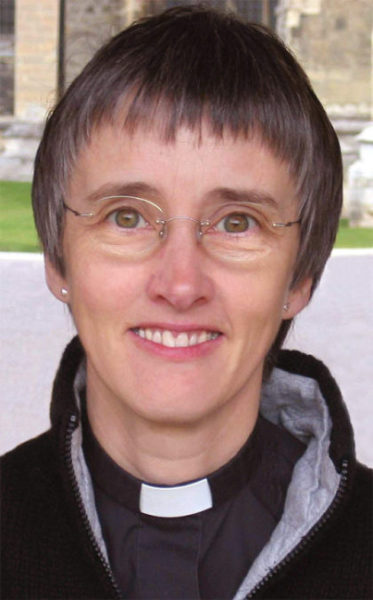 [Episcopal News Service] The Rev. Canon Alison White has been named as the next bishop of Hull. As a bishop suffragan in the Diocese of York, White will become the Church of England’s second female bishop when she is consecrated on July 3 in York Minster.

White, 58, is currently priest-in-charge of Riding Mill in the Diocese of Newcastle and diocesan adviser for spirituality and spiritual direction.

As bishop of Hull, she will have responsibilities “both as ambassador for prayer, spiritual & numerical growth and ambassador for urban life & faith,” according to a church press release.

“This is a joyous day,” said Archbishop of York John Sentamu. “Alison is a person of real godliness and wisdom – it is fantastic that she has accepted God’s call to make Christ visible together with all of us in this Diocese of York.”

White said: “In 2010, I was privileged to be invited to take part in the York Diocesan Clergy Conference where I got a profound sense of a diocese with faith and hope. I … can’t wait to be part of loving God and growing the church in this great part of Yorkshire.”

The Rt. Rev. Martin Wharton, the recently retired bishop of Newcastle, said, “I am thrilled that Alison’s priestly and personal gifts have been recognized by the wider church and believe she will be an outstanding bishop who will quickly endear herself to the people of Hull and the East Riding. As the second woman to be appointed bishop in the Church of England, we rejoice with her and pray for her.”

In January, Libby Lane was ordained and consecrated as the first female bishop in the history of the Church of England when she became the eighth bishop of Stockport, a suffragan (assistant) bishop in the Diocese of Chester.

The appointments come following more than a decade of often-emotional debate, accompanied by various stages of legislative action, about opening the episcopate to women. The Church of England voted in July to allow women to become bishops, a decision that was later approved by the U.K. Parliament and given the assent of Queen Elizabeth II. The approvals were required because the church’s decision effectively changed English law. (The Church of England is an officially established Christian church with Queen Elizabeth II as its supreme governor.)

White will succeed the Rt. Rev. Richard Frith, who became bishop of Hereford in November 2014.

After graduating with a degree in English from Durham University, White studied theology at Cranmer Hall, Durham. She was ordained to the diaconate in 1986 and to the priesthood in 1994, being among the first women to be ordained as priests in the Church of England. She earned a master’s degree in theology from Leeds University. From 1989 to 1993 she served as Durham’s diocesan adviser in local mission. She then spent five years as director of mission and pastoral studies at Cranmer Hall. She served as diocesan director of ordinands, also in the Durham diocese, for two years.