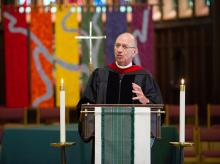 “I am honored to be called to serve an institution that has done so much to form and prepare me for a career in ministry — as it has for so many others,” said Fornaro. “I look forward to working with students, faculty, staff, trustees, alumni/ae, and supporters of EDS as together we help our school fulfill its purpose of preparing lay and ordained leaders for Christ’s church and the world.”

The Very Rev. Dr. James A. Kowalski, EDS Board of Trustees chair, issued a statement informing the school community of Fornaro’s appointment, writing: “Please join me in welcoming the Rev. Fornaro in this new role, and on behalf of the Board of Trustees, offer our prayers for his leadership as we successfully pursue the mission of EDS during a period of transition. We are deeply grateful as we take these next steps, confident that we will continue to be enlivened by theologies of liberation and live up to our role as a respected and progressive center for study and spiritual formation.”

Fornaro brings nearly two decades of experience as an ordained leader in The Episcopal Church, including serving as adjunct faculty member at EDS and as a former member of the CREDO faculty where he provided spiritual guidance and support for clergy from diverse parishes across the country. Fornaro’s first career was as a teacher and administrator in the Boston Public Schools. He holds a BS in Education, an MEd in Administration and Organization, and an MDiv from EDS with concentration in Pastoral Theology.