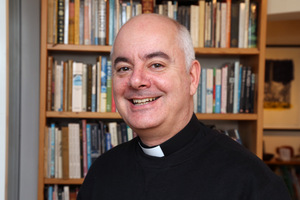 [St. James Cathedral Chicago press release] Saint James Episcopal Cathedral in Chicago has called the Rev. Dominic Barrington, an English priest with a background in arts management and a commitment to supporting the Christian communities in Israel and Palestine, to be its dean.

“In Dominic Barrington, St. James Cathedral has called a strong, loving and wise priest to be its dean,” Chicago Bishop Jeffrey D. Lee said. “I believe he will be an inspirational leader at the cathedral, and a strong presence in the city of Chicago, championing the mission and ministry of the cathedral as a place of extraordinary hospitality, significant outreach, and excellence in the arts.”

Barrington, 52, will be installed as the cathedral’s dean on Sept. 13, pending the approval of non-immigrant visas for him and his family. He said he is eager to begin work at St. James, which he described as “a robust, educated, switched-on Christian community that has a sense of who they are as the Body of Christ in downtown Chicago.”

Though he has served in the Church of England throughout his ordained ministry, Barrington spent a year as an exchange student at Church Divinity School of the Pacific, an Episcopal seminary in Berkeley, California. He later developed an extensive network in the United States through his work in the Holy Land, where he organizes and leads pilgrimages structured to provide income and employment for the indigenous Christian business community.

“We were looking for a dean who could help us to open our doors to a greater cross-section of God’s people, deepen our involvement in the life of the city and strengthen our arts and music program,” said Graham Bell, leader of the cathedral’s governing chapter. “We are delighted that Dominic has accepted our call.”

Barrington has been rector of a church in Kettering, England, 90 miles north of London, for 12 years. He and his wife Alison have two sons, Benedict, 7, and Linus, 5. Before ordination he spent five years with Arts Council England where he worked to create and fund new performance opportunities for many internationally renowned ensembles, including the London Symphony and Royal Philharmonic orchestras.