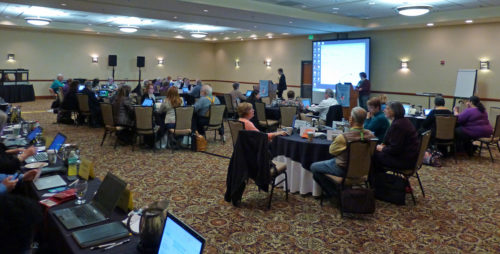 “A fair amount of energy during the gathering was devoted to issues of transition,” Presiding Bishop Katharine Jefferts said of the meeting during a press conference. “Executive Council reviewed its work of the last triennium and they made recommendations that they will pass on to the next iteration of Executive Council.”

“The work of Executive Council has been full this triennium and I think they have good reason to be proud of what they have accomplished,” she added.

The Rev. Gay Clark Jennings, president of the House of Deputies, said during the news conference that “one thing that distinguishes this council is that throughout the triennium” they have “lent a critical eye to how the council functions and how the council can be even more effective in how it works.”

Each of council’s five standing committees wrote a memo to its successor, outlining the work it has done as well as partially completed work that they recommend be continued, and the outgoing class has written a similar memo about council’s overall functioning. The terms of half of the 38 members ends this summer after the 78th meeting of General Convention.

When that June 23-July 3 meeting convenes here in Salt Lake City, debates over the governance structures of the Episcopal Church, including council, will feature prominently. In one of its last acts of the triennium, council agreed to issue a response to some of the recommendations of the Task Force for Reimagining the Episcopal Church.

TREC grew out of General Convention Resolution C095, which called for a committee to develop a plan for “reforming the church’s structures, governance, and administration.”

Because of that lack of consensus, the committee made a few general comments about the report before responding specifically to what TREC said about Executive Council.

The statement, whose final text will be available soon, said that TREC’s structural resolutions “while bold for some, follow a path often focused on saving money but without a clear vision of what mission a new structure will allow the wider church to pursue.”

The statement said the council is “committed to thoughtful and bold change in the structure and governance of the Episcopal Church,” and it added that “the scope of work for TREC may not have been to present a bold new mission for the wider Episcopal Church, but we wonder with the church what this renewal might look like.” 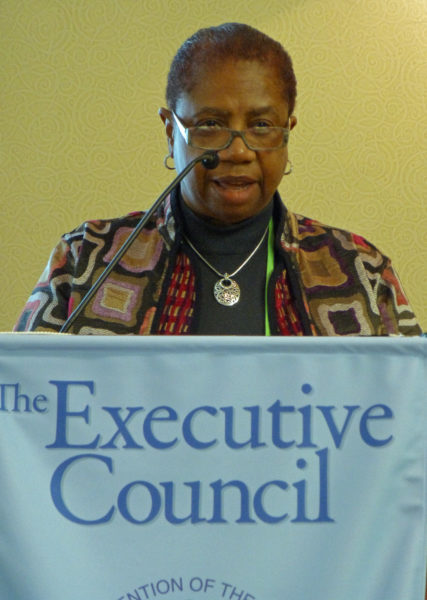 The Executive Council carries out the programs and policies adopted by the General Convention, according to Canon I.4 (1)(a). It is now composed of 38 members, 20 of whom (four bishops, four priests or deacons and 12 lay people) are elected by General Convention and 18 (one clergy and one lay) by the nine provincial synods for six-year terms – plus the presiding bishop and the president of the House of Deputies. TREC called for reducing the membership to 21 “to improve its effectiveness as a board.”

Council said the reduction would not improve its effectiveness. “While we understand the concern about reducing the cost of governance, we also are concerned that false economies could harm the church in the long run,” the statement said.

Council divides itself into five standing committees, plus occasional subcommittees, and the statement said that much of the work of council happens in those smaller groups, “which allows Council to engage in a deep, substantive discussion on important fiduciary and missional concerns in a workable group size.”

Reducing the size of council “inevitably means diminished representation and perspectives from the broader church,” the council said, adding that a smaller council would also mean “diminished capacity for fiduciary oversight.”

The last meeting of convention also said, via Resolution D016, that “it is the will of this convention to move the church center headquarters” away from the building that the Domestic and Foreign Missionary Society owns at 815 Second Avenue in New York. (The Domestic and Foreign Missionary Society is the legal and canonical name under which The Episcopal Church is incorporated, conducts business and carries out mission.)

The final text of the resolution was significantly amended during convention debate to remove directives that would have required council to sell or lease out the entire property and relocate the church center headquarters “as soon as it is economically feasible.”

Council has spent the triennium studying the implications of D016 and on March 21 council agreed to preserve and continue the work of its subcommittee on church center relocation by creating an ad hoc committee of Executive Council for the next triennium.

The committee will be charged with examining the missional, strategic, and financial aspects of the location of the church center and with providing a final recommendation to the Executive Council. The charge is similar to that of the subcommittee whose work is ending.

Council Member Bryan Krislock, who co-chaired the subcommittee with Fredrica Harris Thompsett, said the group’s extensive “listening process” (including a churchwide survey and individual interviews with “key stake members”) showed that “to be blunt, there’s no consensus.” The listening “revealed a deep divide among the members of the church, not just specific to members of council but to the members of the church in terms of what is the best missional strategy for the church center,” he said.

Some believe a building is not needed, others said there should multiple locations, others said there should be a presence in New York area but not at the current address while others called for a more geographically central location in the United States. The “significant factions” of opinion come from all over the country, are in all orders of ministry and have all sorts of relationships with the Domestic and Foreign Missionary Society staff, Krislock said.

The subcommittee worked with professionals to analyze potential alternative sites and the cost involved in such moves. “We have excellent financial information,” Harris Thompsett told her colleagues. “We have some strategic information, but not yet the clear focus for the direction of a church center or centers.”

Krislock said the subcommittee is “still grappling with the broader strategic questions about where the church center or the church staff should be located, how those interact with the costs and the best way to evaluate the financial information we’ve received and analyze it in a meaningful way to prepare a final recommendation.”

The subcommittee was concerned that its work to date would be lost in the transition between triennia, he said. The group believes the work needs to continue “and we do not leave the impression that we have in essence given up.”

Harris Thompsett agreed, adding “we’ve gone as far as we can go with intelligence and integrity.”

When asked why the new committee would report its final recommendation to council and not to the General Convention, Krislock noted that the Domestic and Foreign Missionary Society owns the New York church center property and the council, as its board of directors, is the only entity that can decide to sell it.

The subcommittee will soon submit a report that is meant to be an appendix to the council’s Blue Book report. That report will not contain specifics about “geographic hunches” or financial information due to the incomplete state of the subcommittee’s work, Harris Thompsett said.

In other action, council:
* Affirmed the House of Bishops’ March 17 resolution calling for an independent commission to explore the canonical, environmental, behavioral and procedural dimensions of matters involving the serious impairment of individuals serving as leaders in the church. The commission, which is due to be appointed by Jefferts Schori in consultation with Jennings, is supposed to give special attention to issues of addiction and substance abuse. Council revised the 2015 budget to include $150,000 to fund the commission’s work.

* Agreed to require that all children and staff participating in the General Convention Children’s Program be vaccinated. A child may be exempted by presenting a certificate from a physician certifying that a person’s physical condition precludes one or more immunizations.

Summaries of the resolutions council passed at this meeting are here.