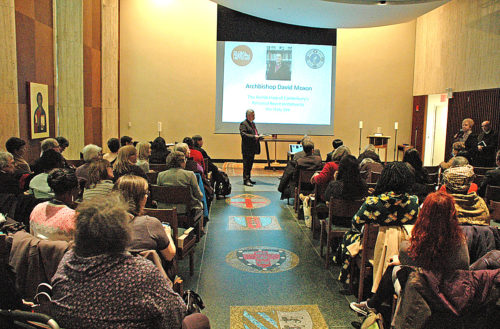 United Thank Offering board President Barbara Schafer, far right, makes a comment during a forum on sexual violence and human trafficking sponsored by the Anglican Communion Office at the United Nations as a side event to the 59th Session of the United Nations Commission on the Status of Women, meeting March 9-20. Photo: Mary Frances Schjonberg/Episcopal News Service

[Episcopal News Service] The number of people who enslave adults and children for profit across the world is multiplying, and traffickers cumulatively make more money than the oil industry.

That’s the assessment of Archbishop David Moxon, the archbishop of Canterbury’s representative to the Holy See and director of the Anglican Centre in Rome, who spoke during a recent forum at The Episcopal Church Center in New York.

Traffickers treat those they enslave “as sub-human, as cattle, as economic units for whom human dignity, human freedom, human opportunity, human potential do not exist because you can make a lot of money quickly,” he said.

The forum on sexual violence and human trafficking was sponsored by the Anglican Communion Office at the United Nations as a side event to the 59th Session of the United Nations Commission on the Status of Women, meeting March 9-20. A crowd filled the church center’s Chapel of Christ the Lord for Moxon’s March 12 presentation, the first part of which was devoted to participants describing their efforts against human trafficking.

Human trafficking and enslavement are “driven by [a] commercial profit-making endeavor, which is driven by greed, for which there is a massive demand,” Moxon said.

It is hard to determine the number of people ensnared in this market, he said, because, “How do you quantify something that’s hidden?”

Hotly debated estimates range between 25 million and 40 million people. Moxon cites the Global Slavery Index’s estimate of 35.8 million, but adds that whatever the number “It’s huge, and it has to be stopped.”

When police try to target traffickers, however, “the prosecution rate is rather low because they shift, they move, they change borders, they cross countries,” he said. Traffickers “are assisted by international mafia, for example, in a way that eludes international police action quite well.”

While rescuing people from trafficking and slavery is important, Moxon said, “we could devote all our energy to rescue, and we’d be rescuing until the end of time.”

He countered the bleakness of this picture by describing what he called a new strategy linking business leaders with religious leaders across interfaith lines to turn off trafficking’s commercial tap and thus “bankrupt slavery.”

The odds are stacked against eliminating human trafficking and its frequent corollary of sexual violence, Moxon said, but we must try because “the world isn’t free until these people are free.”

The strategy for breaking the grip of traffickers that Moxon described began nearly two years ago when Archbishop of Canterbury Justin Welby and Pope Francis met for the first time. Welby knew that Francis had been “profoundly moved” by befriending a survivor of human trafficking in Argentina. Welby also knew that, early in his papacy, Francis had called for an examination of the church’s role in combating human trafficking and modern slavery. Thus, Moxon said, Welby “felt confident” that the pope would be open to his suggestion that their two churches try to work together against trafficking. 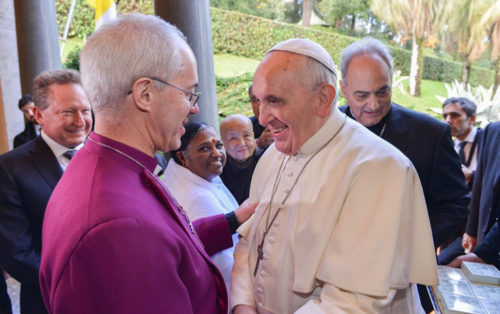 The eventual result was the formation of the Global Freedom Network, which aims to eradicate modern slavery and human trafficking by 2020. That goal was the subject of an agreement announced on March 17, 2014, at the Vatican.

At the same time, Australian philanthropist and businessman Andrew Forrest, an Anglican, decided to give away the fortune he had made in the mineral industry. In the midst of that effort, his daughter challenged him to pay attention to human trafficking. He formed the Walk Free Foundation, which seeks to end modern slavery. Forrest approached faith leaders all over the world to urge them to raise their voices against trafficking and modern slavery and to work together against it.

The organizers took an even larger step on Dec. 2 when 12 Catholic, Anglican, Muslim, Hindu, Buddhist, Jewish and Orthodox leaders met at the Vatican and signed the “Joint Declaration of Religious Leaders Against Modern Slavery on World Day for the Abolition of Slavery”.

“In the eyes of God, each human being is a free person, whether girl, boy, woman or man, and is destined to exist for the good of all in equality and fraternity,” the statement said, calling modern slavery a “crime against humanity.” Its signatories pledged “to work together for the freedom of all those who are enslaved and trafficked so that their future may be restored.”

Achieving such unanimity has “been hard, it’s been rocky, it’s been turbulent,” Moxon said, but in the end “all the theology … jelled.” He noted, for instance, that both Shia and Sunni Muslim leaders signed the declaration.

The declaration was signed just weeks after ISIS announced that slavery must be foundational to the new caliphate it says it is fighting to create, said Moxon, calling that sentiment “deeply sickening.” 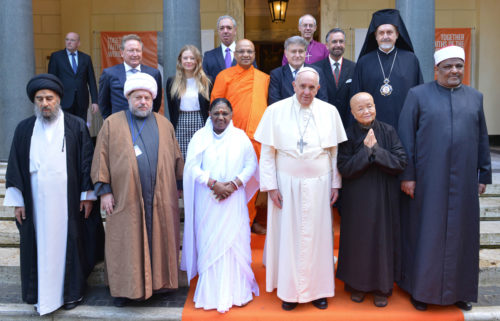 Pope Francis and Archbishop of Canterbury Justin Welby, back row on right, were among 12 Catholic, Anglican, Muslim, Hindu, Buddhist, Jewish and Orthodox leaders meeting at the Vatican Dec. 2 who signed the “Joint Declaration of Religious Leaders Against Modern Slavery on World Day for the Abolition of Slavery”. Photo: Global Freedom Network

The coalition of faith leaders will remain fragile at times, Moxon said, but the leaders hope to continue to find common ground.

“We’ve never done this before — hammered out a strategic plan of a practical sort, with its important spiritual, theological backdrop — and it’s quite complex,” Moxon told ENS after the forum. “But I do think mission should drive ecumenism and interfaith action more than it does. That would help us a lot because if you’re just discussing concepts and theological motions, there will be endless details you can go on debating for a long, long time.”

Instead, Moxon asked, paraphrasing a statement from Pope Francis: “Why don’t we act as if we are one now in the face of global evil?”

Anti-slavery strategies
In the face of that evil, the Global Freedom Network intends to act on a list of strategies, beginning with what is known as supply-chain auditing and cleansing. The process is designed to help companies reduce or eliminate the risk of modern slavery occurring in their supply chains, either as a direct or indirect result of their procurement practices.

Supply-chain auditing is crucial because, “apart from the sex industry, the only reason slavery exists is somebody is paying for the product the slaves make,” Moxon said. 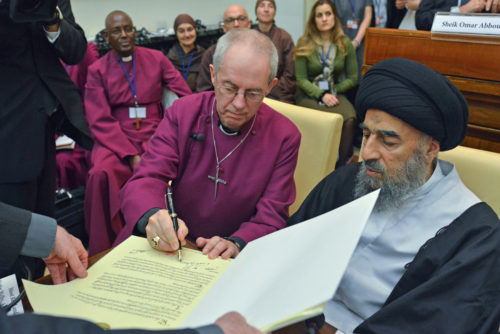 Archbishop of Canterbury Justin Welby signs the Joint Declaration of Religious Leaders Against Modern Slavery on World Day for the Abolition of Slavery during a Dec. 2 meeting at the Vatican. The Grand Ayatollah Mohammad Taqi Al Modarresi of Iraq, another of the 12 religious leaders who signed the declaration, looks on. Photo: Global Freedom Network

The Walk Free Foundation offers a guide (“Tackling Modern Slavery in Supply Chains”) for businesses that want to embark on that effort. U.S. electronics maker Hewlett Packard already has done this work, according to Moxon. Because faith leaders can speak to business leaders about the dignity of every human being, the archbishop of Canterbury will host a meeting of leaders of British corporations to encourage them to use the process.

In a related move, the Global Freedom Network and Walk Free want to foster micro-financing programs through which people can earn more money for their work and thus not fall prey to false promises of wages from people who turn out to be slavers.

Another strategy, caring for the survivors of trafficking, is especially suited to faith communities, Moxon said. Offering long-term support and “genuine restorative friendship” is crucial, and something that churches can do far better than governments, he said.

The groups also are advocating for legal reforms to institutionalize supply-chain auditing and cleansing in ways that reward companies that do so. One such law is being proposed in the U.K. Parliament, he said. Moxon said some companies are leery of doing the audit because they fear prosecution over what they discover.

Education and awareness-raising is another strategy and the Global Freedom Network offers resources that faith communities can use to do that work amongst themselves.

The network wants to identify the 10 most slave-prone countries and establish local councils to devise local solutions based in each country’s customs, laws, culture, financial resources and existing efforts. Forrest, the Australian philanthropist, has donated $25 million for beginning this effort and others, especially the micro-financing strategy, Moxon said.

Another strategy is to educate people about human trafficking. The Global Freedom Network offers resources that faith communities can use to do that work amongst themselves.

Growing awareness
Moxon described his own growing awareness of the issue. Before he went to the Anglican Centre in Rome, Moxon was one of the archbishops of the Anglican Church in Aotearoa, New Zealand and Polynesia. A New Zealand native, Moxon said that he was “only vaguely aware” of the pervasiveness of human trafficking and modern slavery before the archbishop of Canterbury asked him to get involved. Two years of studying the issue and helping to form the Global Freedom Network have left their mark on him. 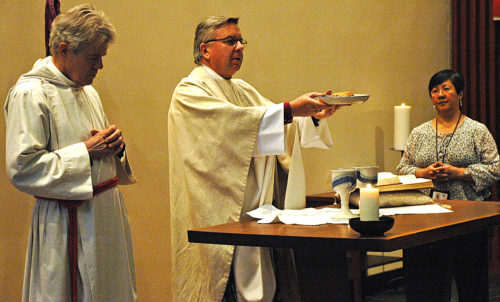 Archbishop David Moxon presides at Eucharist March 12 in The Episcopal Church Center’s Chapel of Christ the Lord. Moxon, the archbishop of Canterbury’s representative to the Holy See and director of the Anglican Centre in Rome, later hosted a forum on human trafficking and sexual violence. Assisting him at the Eucharist were the Rev. Canon James Calloway, Colleges and University of the Anglican Communion general secretary, and Angie Cabanban, the Domestic and Foreign Missionary Society’s diversity and ethnic ministries associate. Photo: Mary Frances Schjonberg/Episcopal News Service

“It was a huge eye-opener; quite extraordinary,” he said during the ENS interview.

It also changed how he looks at the women in his life.

“The question of slavery has made me supersensitive to anything that looks like someone is expected to do too much for nothing,” he said.

He also learned that much of the work needed to eliminate human trafficking is “dangerous or difficult or politically complicated, religiously sensitive, and you don’t necessarily see the glorious outcomes or the spiritual import, even.” But the work must be done, he said.

Earlier in the day, during his sermon at a Eucharist in the chapel, Moxon told the story of a monk who longed to encounter Christ in his prayers said in his cell. Instead, he found him in the people he was required to serve each day.

The question of “do we believe Christ is there or not is the really fundamental point,” Moxon said. “Do you believe it or not, is what it comes down to.”

Editor’s note: The Episcopal Church’s Executive Council may consider a resolution March 21 to express its support of the collaborative efforts of worldwide governmental and non-governmental bodies to eradicate human trafficking, and call the Episcopal Church to action in a variety of ways.