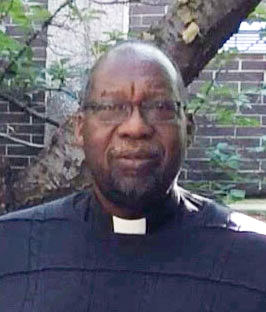 [St. Philips Church] The Rev. Keith Johnson, 53, passed away Tuesday, February 24, 2015 due to complications from cancer.

Born in New Orleans in 1961, Keith grew up schooled in the particular values of his parents, Minnie and Robert Johnson.These virtues, including southern warmth, kindheartedness and a gracious respect of others, would shine in his ministry as a priest. He loved the novel To Kill a Mockingbird and would often listen to the soundtrack of the film when praying or writing. Atticus Finch’s innate goodness reminded Keith of his own father, as well as inspiring Keith to become his own man.

Keith attended the University of Illinois, Champaign Urbana. He graduated with a Bachelor’s Degree in Political Science. Following graduation, Keith went to help others by taking a position with the U.S. Social Security Administration in Detroit and then Key West, Florida.

In 1998, Keith married Ginny Hare, and took on an instant family which included Ginny’s two children, Edward and Sarah. The family moved to Alexandria, Virginia, where Keith studied at The Virginia Theological Seminary. One of Keith’s joys was coaching Edward and his various teams in football. He coached Pop Warner football during his time in seminary, and continued coaching freshman and junior varsity ball.

In 2001, he was ordained a deacon in the Episcopal Church by Bishop Leopold Frade. Later that year, he accepted a priesthood in the Diocese of Southeast Florida. Keith simultaneously served the church as rector of St. Matthew’s and assistant at St Paul’s in Delray Beach. Keith’s personal mission here was to bridge the racial gap between these two diverse parishes.

From 2003 to 2008, Keith served as rector of St. Andrew’s in Ben Lomond, California. While here Keith served on the board of Valley Churches United Missions, a non-profit that provided food and assistance to over 7000 county residents. Keith next went on to minister as an assistant priest at Holy Trinity in Clearwater, Florida, for a few years. He then spent eighteen months at St. Luke’s in New Orleans before being called to Harlem’s historic St. Philip’s Church in 2012.

During his time at St. Philip’s, Keith quickly emerged as a significant leader among the clergy and brought leadership to the revitalization of the Episcopal presence in Harlem. He embraced this calling at once, providing a reasonable, loving and gracious presence in that community.

On Thursday mornings, Keith provided a ministry of presence to parolees at the Harlem Community Justice Center. As clergy for St Philip’s important inter-faith initiative, Keith supported these men and women with training in public speaking skills so they could tell their stories. Keith also established “Warriors of a Dream,” a neighborhood anti-violence youth initiative, as well as a local chapter of Integrity LGBT at St Philip’s. Keith lent his smile and presence as he rode on the Episcopal float in the annual Greenwich Village Gay Pride Parade. During Keith’s tenure, St Philip’s became a member of Ecclesia, a ministry providing Eucharist and meals to the homeless in Marcus Garvey Park on Sundays.

Keith was one of six fellows in the Faith and Justice Fellowship program under the Federation of Protestant Welfare and Agencies and New York Theological Seminary. This program trains faith leaders to develop their abilities to become prophetic witnesses for fair social policies and equal justice.

He is survived by his wife, Ginny, his step-children, Edward and Sarah, his parents and sister.