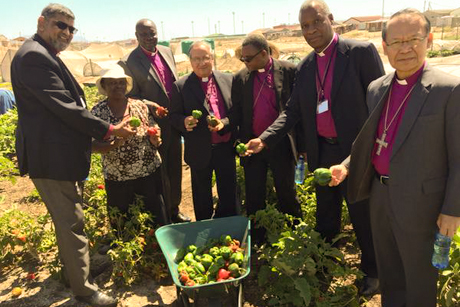 The leaders include archbishops, bishops and other members of the Council of African Provinces of Africa (CAPA), a body which coordinates and articulates issues affecting the church and communities across the continent.

The council, chaired by the Most Rev. Bernard Ntahoturi, archbishop of the Province of the Anglican Church of Burundi, represents Anglicans in 26 countries from 12 church provinces.

The meetings, which are happening in South Africa for the first time, include primates (the leaders) of churches and members of the CAPA Standing Committee.

The meetings have included a gathering of members of the Anglican Global South, chaired by the Most Rev. Mouneer Hanna Anis of Egypt, president bishop of the Anglican Church in Jerusalem and the Middle East.

Maite Nkoana-Mashabane, South Africa’s minister of international relations and cooperation, and Premier Helen Zille of the Western Cape sent messages of welcome to the delegates and their spouses.

Makgoba said the meetings were a tangible expression of the Anglican family belonging together. He expressed hope that the meeting would renew relations among churches across Africa.