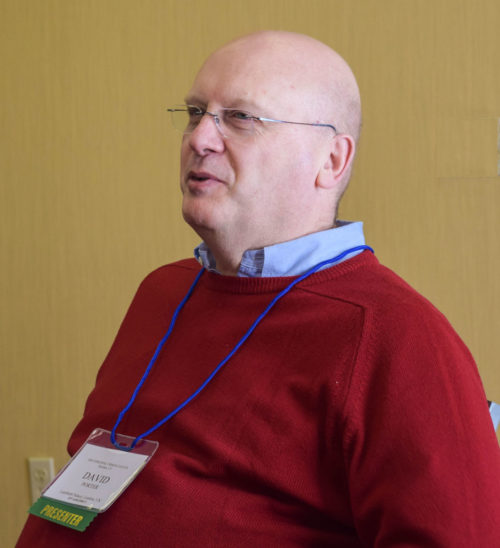 Canon David. W. Porter is director of reconciliation for the Archbishop of Canterbury. Photo: John Armstrong

[Episcopal News Service] “Reconciliation is always a quest, always a journey,” observed Canon David. W. Porter, director of reconciliation for the Archbishop of Canterbury, as he addressed Episcopalians gathered for the annual assembly of the Episcopal Urban Caucus in late February.

The Episcopal Church in Connecticut hosted the two-day conference in Meriden. The Episcopal Urban Caucus is an association of lay and ordained Episcopalians dedicated to the cause of reconciliation, social justice and peace. Porter spoke at one of ten workshops that explored ways to end violence and promote reconciliation.

Porter, formerly a peace-building practitioner in Northern Ireland, is a layperson and a Baptist who called himself a “strongly convinced Anabaptist, who would be a Mennonite if I lived in America.” Archbishop Justin Welby and Porter worked together when Porter was serving as the canon for reconciliation at Coventry Cathedral and Welby was the dean of Liverpool. Welby has made reconciliation a cornerstone of his episcopacy and hired Porter to his current position soon after being appointed archbishop.

Porter said that he has one title but three jobs. His first task is to work within the Church of England to find a different way of engaging issues of deep difference, such as the ordination of women bishops. This particular issue moved forward in January of this year when the Rt. Rev. Libby Lane was ordained and consecrated as bishop suffragan of Stockton.

Efforts to ordain women to the episcopate in the Church of England helped define a model for what Porter called “the Archbishop’s vision of learning to disagree well.” Porter is now applying the model to the issue of human sexuality by organizing a series of “shared conversations” among clusters of diocese in 13 different locations, followed by the General Synod in 2016. His sees his role as helping to “take the toxicity out of the conversation.”

Porter’s second job is to advise on healing divisions in the Anglican Communion. Welby, during his first year in office, visited 37 primates. While Welby was welcomed for those visits, the message has been “hospitality does not mean reconciliation” and there are many differences to be reconciled.

Porter and Connecticut Bishop Diocesan Ian Douglas together explained how the “bonds of affection” that developed between Anglican churches following British and American colonialism were no longer sufficient to hold the Anglican Communion together. Porter and Douglas agreed that common participation in God’s mission, while not denying difference in contemporary post-colonial Anglicanism, offered a hopeful way forward.

Porter said his third task is the one he likes the most. The vast majority of the 85 million Anglicans around the world live in conflict situations and or in post-conflict situations, he said. In these contexts the questions become: “How do we help churches keep going? How do we keep churches from becoming part of the conflict and taking sides? And how can churches and their leaders become peace-builders and bridge-builders in their own right?” To facilitate this work Porter draws on his experience in Northern Ireland.

Porter concluded his talk by summarizing six lessons about reconciliation that he has learned through those years. First, “it’s always political” and politics is the art of negotiating relationships that are often very personal. Since all conflicts are political, if the church is to be involved it has to be political.

Second, “bad religion trumps good.” When false religions use slogans and make tempting promises, people will believe and sign on every time. “We should not give up hope. We need to think differently about how we go about changing our world and challenging bad religion.”

Third, “we are all responsible.” Here Porter drew the distinction between being complicit and being culpable. Everyone who is aware of unreconciled situations is complicit, but only when we participate in the conflict do we become culpable.

Fourth, “history matters” and it is critical to keep a historical perspective. Relationships make all the difference, he explained several times, and knowing the history of a relationship helps forge stronger ties.

Fifth, “peace offends [and] can violate our sense of justice,” he said. This is because in the name of reconciliation, justice may not be served. For him personally what mattered was “There is a belief that there is a world to come in which all will have to give an account to the living God, and it is a fearful thing to fall into the hands of the living God. I may not see justice now but as Martin Luther King said, ‘The arc of the universe tends toward justice’ and that arc does not stop at death.”

̶  John Armstrong is a retired IT professional now working as a freelance journalist.