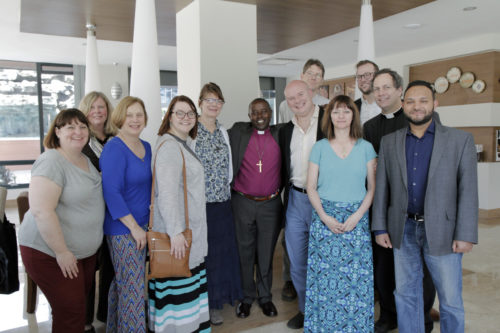 On March 4, Anglican Bishop Joel Waweru of the Diocese of Nairobi welcomed the #ShareTheJourney pilgrims to Kenya, and offered a brief overview of the Anglican Church of Kenya. Photo: Lynette Wilson/ENS

[Episcopal News Service – Nairobi, Kenya] Eight #ShareTheJourney pilgrims arrived in Nairobi March 3 for an 11-day pilgrimage to Kenya and Rwanda to learn about the plight of Congolese refugees and the process they go through to gain resettlement in the United States.

“What I hope the result of this trip will be is an increased understanding of what a unique and special program Episcopal Migration Ministries is in The Episcopal Church, and that more Episcopalians can see a place for themselves in this life-saving ministry,” said Deborah Stein, director of Episcopal Migration Ministries, the Domestic and Foreign Missionary Society’s refugee resettlement service that is leading the pilgrimage.

(The Domestic and Foreign Missionary Society is the legal and canonical name under which The Episcopal Church is incorporated, conducts business, and carries out mission.)

In addition to meeting with nongovernmental organizations, including the United Nations High Commissioner for Refugees and Church World Service’s Africa Resettlement Support Center, the pilgrims will travel to Rwanda to visit the Kigali Genocide Memorial Centre and the Gihembe Refugee Camp.

The pilgrimage is part of Episcopal Migration Ministries yearlong, 75th anniversary #ShareTheJourney campaign to raise awareness of the ways the Missionary Society works to facilitate refugee resettlement throughout The Episcopal Church.

“I think Episcopal Migration Ministries is one of the most inspiring and least well-known ministries in The Episcopal Church,” said the Rev. Scott Gunn, one of the pilgrims and executive director of Forward Movement, a Cincinnati, Ohio-based ministry of The Episcopal Church that encourages discipleship. “I’m eager to see transformation in my own life as I experience this pilgrimage, and I want to do whatever I can to share this journey with other people.”

Through Episcopal Migration Ministries, the Domestic and Foreign Missionary Society partners with 30 resettlement affiliates in 26 dioceses nationwide. It is one of nine agencies working in partnership with the U.S. Department of State to welcome and resettle refugees to the United States.

In 2014, the Domestic and Foreign Missionary Society worked with partners to resettle 5,155 of the tens of thousands of refugees who came to the United States through UNHCR’s screening process.

Over the next several years, UNHCR plans to resettle 50,000 refugees from the Congo, with 70 to 90 percent to be resettled to the United States.

Since 1998, more than 5.5 million people have died in the Congo from fighting, disease and malnutrition in what is regarded as the deadliest conflict since World War II. About 2.5 million people have been internally displaced, and some 500,000 have fled the country’s protracted conflict, with the vast majority living in refugee camps in the Great Lakes and Horn of Africa regions.

“There’s no other durable solution for this group of refugees, who’ve been waiting for over a decade in refugee camps without hope of a future,” said Stein. “Some have been resettled or have found a way to stay in the country of asylum, but the rest are languishing away in camps. Resettlement is the only option for them.”

A refugee is someone who has fled his or her country of nationality because of a “well-founded fear of persecution” based on race, religion, ethnicity, or political or social affiliation.

There are 15.5 million refugees worldwide, according to the UNHCR, whose mandate is to provide international protection for refugees. The agency’s primary focus is on repatriation, or safe return home, followed by citizenship or legal residency in the host country. The third option is resettlement to one of the 22 countries worldwide that accepts refugees. One percent receives third-country resettlement, with half of that 1 percent destined for the United States.

The resettlement process typically takes years; refugees can spend decades living in camps before their cases are heard and adjudicated. Kenya is one of two countries – the other being Ethiopia – that hosts the largest number of refugees living in camps in Africa.

“One of the effects of resettlement is that it’s a show of support for countries hosting refugees; it gives breathing space to host countries to continue to keep their borders open to future refugees and asylum seekers,” said Stein. “The Congolese refugees are just one of many groups awaiting a similar durable solution.”

– Lynette Wilson is an Episcopal News Service editor and reporter.