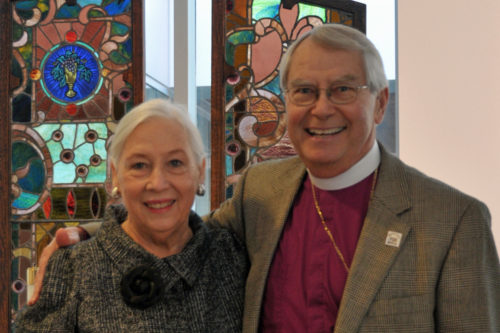 Patricia High and her husband, Fort Worth Bishop Rayford High, were partners in ministry. Photo: Episcopal Diocese of Fort Worth

[Episcopal Diocese of Fort Worth press release] Patricia High, teacher, beloved wife, mother, and grandmother, 72, died on March 4, at her home in Fort Worth.

There will be a reception immediately after the service at River Crest Country Club in Fort Worth.

Pat was born in Seminole, Oklahoma. Her parents were Max and Josephine Moseley. She married Rayford B. High, Jr. on Aug. 29, 1964. He is the bishop of the Episcopal Diocese of Fort Worth, and the retired bishop suffragan of the Episcopal Diocese of Texas. Until her illness prevented it in recent months, Pat was always by his side at episcopal visitations to congregations. She was a full partner in his ministry, both as priest and bishop.

They met in Houston when both were in college. Pat attended the University of Texas. They have been married 50 years and have three children and six grandchildren. Pat taught at St. Mark’s Episcopal School in Houston.

In an interview at the time of his retirement as bishop suffragan, Bishop High said he is so grateful for the strengths Pat brought to their marriage and their ministry. “She’s been able to help me in areas that I’m not as strong in. She has a grasp of numbers and understanding that I really don’t so takes care of the finances. But where she really has helped is, as a parish priest I was always the last person to leave the church on Christmas Eve, she assembled the toys, even a swing set once. … She’s been a great help to bail me out in terms of being a father, too, because I still got credit for some of that.”

Their first child, Allison, was born in San Antonio, where he was at St. Mark’s Episcopal Church. Shortly after that, they moved to Victoria, where he served as rector at St. Francis Episcopal Church. While in Victoria, they were expecting their second child, and were joyfully surprised by the arrival of twins, a daughter, Leslie, and a son, Rayford B. High, III.

All three children, their spouses and children live in Fort Worth.

Condolences can be emailed to condolences@edfw.org. Cards can be sent to Bishop High at the Episcopal Diocese of Fort Worth, 4301 Meadowbrook Drive, Fort Worth, TX, 76103.