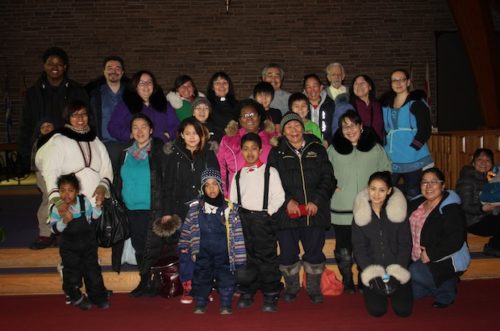 Members of Annie Ittoshat’s first Montreal congregation gather for a group photo. Ittoshat is fifth from the left in a clerical collar; her husband, Noah, is next to her. Photo: Harvey Shepherd

[Anglican Journal] “What we are doing is what God foreplanned,” the Rev. Annie Ittoshat from Nunavik in northern Quebec said as she launched a new ministry to Montreal’s Inuit community Feb. 22.

Ittoshat led her first service, mostly in Inuktitut, before a congregation of more than 30 Inuit and their family and friends, in St. Paul’s Anglican Church, in the west-central suburb of Lachine. The St. Paul’s parish closed in November 2012. (A Seventh-Day Adventist congregation and other groups now rent the church or its hall.)

She will also serve Montreal’s diverse population of Inuit in other ways, including visits to Inuit who come to the city for medical treatment, and participation in a modest eucharistic ministry, which Montreal clergy have offered for some time to these patients.

She was also planning to make contact with other groups serving local Inuit, including drop-in centers related to the Anglican Diocese of Montreal.

Along with patients and transients, Ittoshat also expects to serve staff working at health-care and other institutions, and Inuit living in Montreal for a variety of professional and other reasons.

The Inuit population of Montreal has been estimated at about 1,000. Some are drawn by jobs, including positions in institutions that serve Inuit. Others are in the city for studies, for health care or to accompany family members who are patients. They are transient for various reasons or are driven from the North by social or housing problems.

Ittoshat and her family are living in the rectory of St. Paul’s Church, situated in an area where there are several Inuit and a number of organizations serving them, partly because of the proximity of Pierre Elliott Trudeau International Airport.

She was accompanied at the service by her husband, Noah, a miner at the Raglan base-metal mine in Nunavik, who has made arrangements to work on a rotating schedule that allows him to spend a couple of weeks at a time in Montreal, and a son and foster son, both named Peter. There are also two daughters, one living in Montreal and the other in the North.

The service included vigorous, unaccompanied congregational singing of Inuktitut versions of standard hymns. The minister preached in an animated way, without notes, on one of the standard Lectionary readings of the day, from 1 Peter 3, which says Christ “suffered once for sins, the righteous for the unrighteous, that he might bring us to God.”

She said (in a brief summary in English) that this should relieve one of the needs for recurrent feelings of guilt. “We make a mistake, we ask [God] for forgiveness. If we ask for forgiveness, it is so.”

The new minister and her husband, sons and one daughter arrived in Montreal from Kuujjuarapik, at the mouth of the Great Whale River.

Ittoshat was accredited and ordained and served as a deacon and then priest in the North, and more recently, she studied for two years at Wycliffe College in Toronto, where she received a Master of Divinity degree in May, the first Inuk to do so.

Services in Lachine will take place weekly, with Holy Communion on the last Sunday of the month.

— Harvey Shepherd is editor of The Montreal Anglican, the newspaper of the Anglican diocese of Montreal.