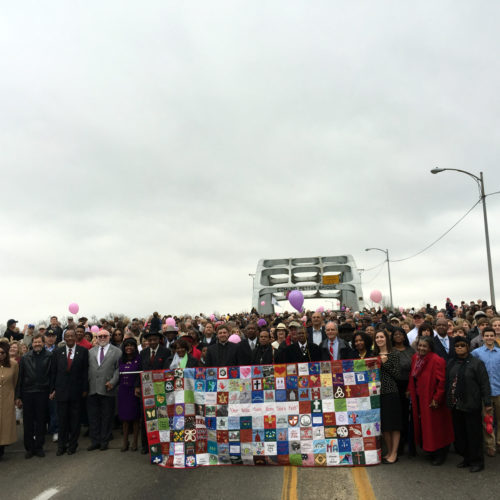 Led in procession by a unity quilt, faith leaders and local leaders participate in a unity walk with some 2,000 Selma residents. Photo: Kate Wood

[St. Paul’s Church, Selma] The image of a city can become frozen in time, and a single event can create an impression so deep that it never fades, according to the Rev. Jack Alvey, rector of St. Paul’s Episcopal Church in Selma, Alabama.

Fifty years ago, state troopers attacked marchers on the Edmund Pettus Bridge in Selma, in one of the defining moments of the civil rights movement. Selma has been grappling with the legacy of that moment, and the events that led up to it, ever since.

On March 1, a coalition of faith leaders, including Alvey, helped the city demonstrate the progress it has made. A racially integrated crowd of some 2,000 people took part in a unity walk that began on the south side of the famous bridge and ended with a prayer service in Songs of Selma Park.

Participants walked the same Selma-to-Montgomery route as marchers did on Bloody Sunday in 1965, but in reverse, to symbolize the theme of the gathering, “One Selma: Coming Home United in Faith,” said organizer Juanda Maxwell, a lay leader at Brown Chapel African Methodist Episcopal Church.

“I believe God wants Selma to be a reminder of the new story we are given through the good news of Jesus Christ,” Alvey told his parishioners in a sermon on March 1, ahead of the unity walk. “Our walk will give us permission to celebrate the bridge, to look at the bridge in a new way. We can look at the bridge and see people of all colors and stories walking in a faith that believes God is making us one.”

The turnout for the walk was almost three times what organizers had anticipated, and rather that closing two lanes of the famous bridge, police closed all four. Participants included the Rev. F.D. Reese, who had invited Martin Luther King Jr. to Selma for the 1965 march, and local political leaders, including Democratic Representative Terri Sewell of Birmingham, who grew up in Selma.

“It was beautiful to … see 2,000 people walking behind me for one purpose: to say we are united,” said the Rev. Jerry Light, pastor of First Baptist Church, another event organizer. “It was almost like a family reunion on the bridge. We stood there and I thought, ‘This is why God called me to Selma five years ago.’” 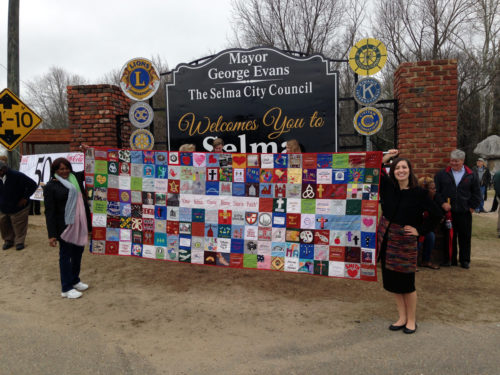 The walkers crossed the bridge behind an 11-foot wide unity quilt, composed of 176 squares contributed by individuals and congregations from across the city and coordinated by Alvey’s wife, Jamie, a quilter. Begun in January, the quilt became the focal point of the event. “Everybody wanted to come up and get their picture made with it,” Jamie Alvey said.

Maxwell said about half of those who participated in the march were black and half were white. “That’s almost unheard of,” she said. “And it was just beautiful, just like that patchwork quilt.

“We wanted to celebrate those who marched in 1965, especially the martyrs,” she added. “But we also wanted to speak up for Selma as it is today because we are not downtrodden.”

Maxwell said the coalition next plans to encourage members of the city’s predominantly black and predominantly white churches to invite one another to worship together on a specific Sunday during the coming year.

“I was overwhelmed by how well it turned out,” Jack Alvey said. “The spirit was joyful. I heard someone say that this was like a wedding. It was like a wedding. But now we are ready for the marriage – a long-term commitment to come together as a community.”