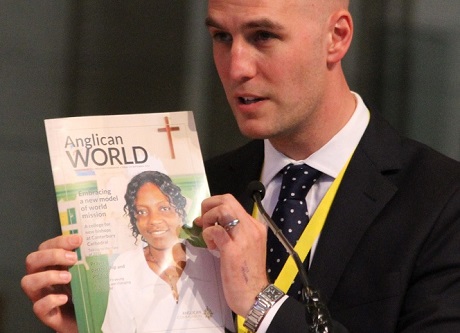 Jan Butter came to the ACO in March 2010 from humanitarian agency World Vision International where he was head of global advocacy communications. At St. Andrew’s House he was tasked with helping the Anglican Communion and its Instruments of Communion better communicate the best of their life and mission.

To that end his work has included strengthening the impact and reach of the Anglican Communion News Service; establishing the ACO’s presence on Twitter and Facebook*; helping member churches build their communications capacity; and undertaking a corporate rebrand for the ACO, including a refresh of the Compass Rose logo design.

“It has been a genuine privilege to lead the ACO’s communications department and serve the Anglican Communion,” said Butter. “I believe that communicating the Gospel is at the heart of our calling as Christians and I have been delighted to see more and more Anglicans and Episcopalians able to share their stories with each other and the world.

“I’m particularly pleased to have relaunched Anglican World magazine and to have moved the Anglican Communion News Service from an email service to a fully-fledged website. Also, I’m glad to be able to launch the brand new Anglican Communion website next month before I leave.

“All of these tools have and will help people everywhere to have a more accurate perception of Anglican/Episcopal life and worship around the world.”

Butter has worked with colleagues from other provinces to ensure members of the Anglican Communion heard from the Primates’ Meeting in Ireland, the Anglican Consultative Council in New Zealand and from the yearly Standing Committee meetings.

“Perhaps my greatest joy in this role has been the opportunity to connect with and worship alongside people from every member church,” he said. “I can honestly say that the Anglican bonds of affection – the relationships between different nationalities who share faith, tradition and history – makes this Anglican Communion what it is.”

Interim Secretary General, the Rev. Canon Alyson Barnett-Cowan, said, “Jan will be sorely missed, not only at the Anglican Communion Office but around the Communion. His professional skill as a communicator, combined with his layman’s passion for the Gospel, has inspired many.

“He has been particularly committed to increasing the communications capacity of member churches of the Communion, and to equip young communicators with the tools they need to share inspiring and sometimes challenging stories from their many complex contexts.”

Butter has accepted the position of director for global health communications with World Vision International. His last day with the Anglican Communion Office is March 18.

The post of director for communication is expected to remain vacant until the new secretary general has been appointed. In the meantime, ACNS and Anglican World will continue to cover Anglican Communion news and information. If you have anything for publication please email news@anglicancommunion.org