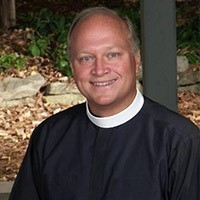 Kendrick, 54, was elected during the diocese’s 44th annual convention held at Trinity Episcopal Church in Mobile, Alabama. He was elected on the third ballot out of a field of three nominees. He received 97 votes of 163 cast in the lay order and 32 of 53 cast in the clergy order. An election on that ballot required 82 in the lay order and 27 in the clergy order.

Kendrick has served as rector of St. Stephen’s since 2007. In 1984, he earned a Bachelor of Arts degree in architecture and marketing from Auburn University in Alabama; and in 1995, he received a Master of Divinity degree from Virginia Theological Seminary in Alexandria. Russell is married to Robin. They have two children, Aaron and Hannah.

“I am keenly aware of and deeply humbled by the trust and hope that this election carries. Robin and I look forward to returning to the Diocese of the Central Gulf Coast and serving our Lord with the people that once formed us and sent us forth into the larger church. I take this election to be a call for collaboration, cooperation and creativity as we seek to be apostles for Jesus in God’s world,” said Kendrick following the election.

Under the canons (III.11.4) of The Episcopal Church, a majority of bishops exercising jurisdiction and diocesan standing committees must consent to Kendrick’s ordination as bishop within 120 days of receiving notice of the election.

The Episcopal Diocese of the Central Gulf Coast includes southern Alabama and the panhandle of Florida, 62 churches, and approximately 20,000 members.