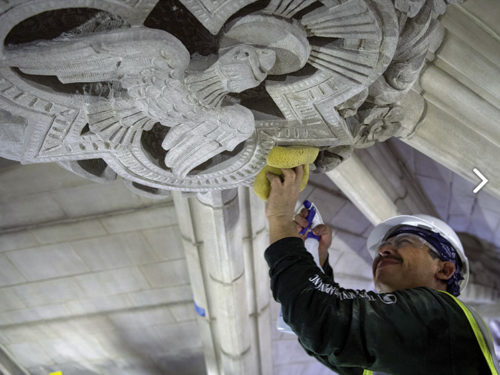 In the months following, some damaged areas were disassembled and an extensive network of stabilization scaffolding was erected to secure structures and provide access for examination and formulation of plans for repair and reinforcement. 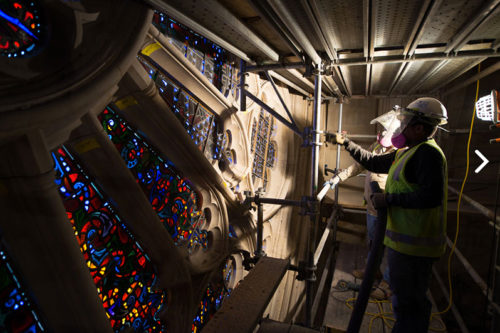 Phase I repairs began in March 2014 and addressed the interior high ceiling of the nave and restoration of the six flying buttresses around the apse, or east end of the cathedral. The nave vaulting and windows were inspected, cleaned, and repaired. Akoustolith tile were secured and sealed. Decades of dirt were carefully removed, and failed caulking was replaced.

When the six apse buttresses lost compression during the quake, a few stones slipped out of position, leaving visible gaps in the buttresses, while other stones fractured, sending chunks of stone to the ground below. Restoration work filled the voids, replaced the broken stones with Dutchmen repairs, and reinforced the flyers with stainless steel rods and grout to ensure better performance in any future seismic event.

This week, the final interior scaffolding is being removed.

“The view of the fully restored nave is breathtaking, and all that the cathedral does in this space has a feeling of openness and vitality—as well as improved acoustics and inspiration with the return of views of the clerestory windows and the boss stones, now cleaned for the first time ever,” according to a cathedral press release. “The cathedral is extremely grateful for the support that has made this work possible and the diligent work of Davis Construction and Lorton Stone to return the building to its former glory.”

The remaining work — approximately 85 percent of the exterior work — awaits funding from individuals and institutions. The work will likely take years, even a decade, to complete and will cost $22 million or more. This work includes the central tower grand pinnacles, the engaged buttresses on the length of the nave, the exterior stonework on the transepts, and the pinnacles on the west towers.

The full cathedral press release and a restoration image gallery are available here.