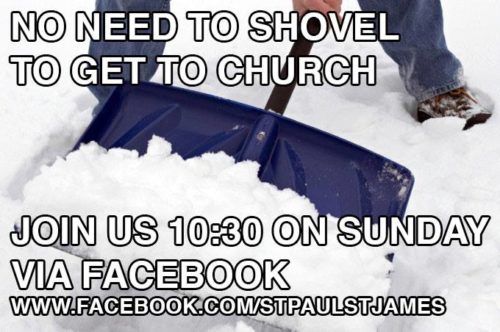 A Facebook ad invites parishioners of the Episcopal Church of St. Paul and St. James in New Haven, Connecticut, to join a virtual service in the warmth and safety of their own homes.

[Episcopal News Service] For the Rev. Alex Dyer, canceling church altogether on Sunday was simply not an option as weather forecasts predicted more than 20 inches of fresh snow throughout parts of New England in what has become one of the Northeast’s coldest winters on record.

Instead, the rector of the Episcopal Church of St. Paul and St. James in New Haven, Connecticut, announced that while the building would be closed for regular Sunday services, his parishioners were invited to a virtual service via social media from the warmth and safety of their own homes.

“A large part of incarnational ministry is meeting people where they are, and in a New England blizzard that means they are at home. Asking people to put themselves at risk just so they can meet in the ‘correct’ building just doesn’t seem to make sense,” Dyer told Episcopal News Service following the service, which he led on Facebook and Twitter using a modified liturgy from the Book of Common Prayer, a video sermon preached from his home and hymns shared via YouTube.

“Right now, these services are the exception and not the norm,” Dyer said. “They could never truly replace the real experience of communal live worship, just like webcasts from other churches are not quite the same. Many people will look at the flaws, but I challenge people to let down their guards and look at how it could be useful. Social media is a tool and there are some instances where this tool is very effective.”

It was the second social media service that Dyer had offered due to adverse weather and concern for his parishioners’ safety; the first being two years ago.

On Saturday evening, Dyer spent several hours in preparation, choosing YouTube versions of the hymns, arranging the prayers and liturgical text on a separate document so he could cut and paste during the service, and pre-recording his sermon.

“It is never easy to preach to your computer and no congregation,” he said, “but the hardest thing to gauge is the pace of the service as you don’t always know who is participating and where they are in the service.

“The most important thing, and what I would do more of next time, would be to encourage participation. Ask people what they are praying for and what they are thankful for. People commenting are crucial to the service.”

Further north, where the snowfall in some parts of Connecticut, Maine, Massachusetts, New Hampshire and Rhode Island was even more severe, many Episcopal churches were forced to abandon their weekend service schedules entirely, as travel bans kicked in and the basic safety of parishioners was the chief concern.

But at Trinity Church in Boston, the Rev. Samuel T. Lloyd III announced ahead of the weekend blizzard that the “Sunday” worship – including baptisms, choir and scheduled guest preacher – would be moved to Saturday at 4 p.m. before the predicted brunt of the storm.

The Rev. Patrick Ward, Trinity’s associate rector for worship, told ENS that approximately 225 people turned out for Saturday’s Holy Eucharist, which included a choir of about 30 adults and youth choristers, and many stayed for a Valentine’s reception afterwards.

“Given the ‘cabin fever’ we have all been experiencing, everyone seemed thankful for the chance to be in community before retreating again for the new storm,” Ward said. “Not since the Boston Marathon bombings displaced us a few years ago have we contended with such a disruption, but the people of this parish are resilient and flexible and creative, and full of the Holy Spirit.”

Following the service, the altar floral arrangements were wheeled into the middle of the reception and flower guild members snipped them apart and made spontaneous Valentine bouquets for parishioners to take away and give to family or friends.

Recognizing that many would be unable to attend the rescheduled service, Trinity’s “Blizzard Edition” newsletter was e-mailed to 3,000 households with links to resources to support Sunday worship for parishioners wherever they may be.

Ward said that many parishioners had e-mailed to say they’d made use of the online resources for home worship and that it’s an idea they will replicate whenever it is needed.

Writing from her own “personal snowbank” in Cambridge, Massachusetts, diocesan communications director Tracy Sukraw said she was aware of several other churches that had offered special late-afternoon or early evening services on Saturday instead of Sunday, including St. Paul’s Church in Brookline, which advertised a “Pre-Snow Service” at 5 p.m. saying “Celebrate Valentine’s Day with the One who loves you.”

A number of those that did close on Sunday took to social media, she said, encouraging “Church at Home” and posting the day’s Scripture readings, collects and sermons, such as this YouTube offering by the Rev. Matthew Stewart, rector of the Church of the Holy Spirit in Fall River.

Clergy at St. Mark’s Church in Westford, northwest of Boston in the Merrimack Valley, declared Sunday as “Pray in Your Pajamas Day” with a message on its Facebook page that read: “Make this snow day a Sabbath day by sleeping a little late, have breakfast with your family, and then pray together for all who will work so hard Sunday to dig us out from yet another storm, and for those who struggle to find adequate shelter. Finish by reciting this canticle, ‘A Song of Creation’ from the Morning Prayer service in the Book of Common Prayer, p. 88…”

And the Rev. Leslie Sterling, rector of St. Bartholomew’s Church in Cambridge, in posting the Sunday church closing notice, concluded with a few words of encouragement: “This challenging weather will end eventually. Spring always follows winter.”

Several congregations throughout Maine and Rhode Island also sent out suggestions and resources for worshiping at home.

Back in Connecticut, as Dyer concluded his New Haven-based social media service with the words “Let us go forth into the world to share the Good News of Christ! (After the blizzard, of course)” a chorus of responses filled the Facebook comments with “Thanks be to God!”

Following the service, many people sent messages to Dyer via social media and e-mail offering thanks for the flexibility and creativity.

And Dyer’s initiative certainly has the overwhelming support of his bishop. “We are incredibly blessed in the Episcopal Church in Connecticut to have young and creative leaders like the Rev. Alex Dyer who are imagining new ways to participate in God’s mission,” Bishop Ian Douglas told ENS. “I thank God for Alex’s leadership.”

But while Dyer recognizes that an online service won’t replace a traditional service, “I am in prayer about how we can better utilize social media to connect people to each other and to God.”