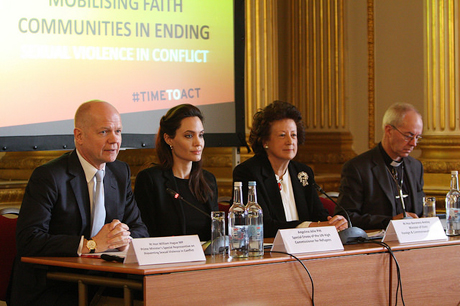 From right: U.K. Conservative Member of Parliament William Hague; Actress Angelina Jolie-Pitt; Minister of State of the Foreign and Commonwealth Office the Rt. Hon. Baroness Anelay; and Archbishop of Canterbury Justin Welby, on a panel at the FCO event. Photo: Anglican Alliance

[Anglican Alliance] Anglicans gathered with other faith leaders in London to set recommendations for how faith communities can work collaboratively, together with governments and national and international stakeholders, to end sexual violence in conflict. The two day interfaith consultation was convened by the We Will Speak Out coalition and UK Foreign & Commonwealth Office (further coverage of the meeting here).

On the final day of meetings faith leaders made a joint statement (the full text is available below). You can add your voice to theirs at http://www.wewillspeakout.org/interfaithevent2015.

On Feb. 11, the Anglican Alliance hosted a webinar on how churches can mobilize to end sexual and gender-based violence in their communities and raise their voices with other churches and faith communities globally to tackle these issues at a global level.

The webinar was chaired by the Rev. Rachel Carnegie, co-executive director of the Anglican Alliance, and presenters included: Archbishop Henri Isingoma, Anglican Church of Congo (DRC); Mathilde Nkwirikiye, Mothers’ Union in Burundi; Mara Luz, Episcopal Church in Brazil; Therese Mama Mapenzi, a partner of CAFOD in DRC; the Rev. Terrie Robinson, director for women in church and society at the Anglican Communion Office; and Paulo Ueti, theologian and Anglican Alliance facilitator for Latin America and the Caribbean.

You can listen to the recording of the webinar and access the slides, with presentations in both English and French.

Resources relating to many of the themes discussed on the webinar are available at: http://www.wewillspeakout.org/resources.

We have come together at the inter faith consultation on ‘Mobilising Faith Communities to End Sexual Violence in Conflict’, 9-10 February 2015, because we recognise our particular role and responsibility as leaders in helping bring to an end the use of rape and other forms of sexual and gender based violence in conflict. This consultation advances the discussion at the ‘Global Summit to End Sexual Violence in Conflict’ held in London in June 2014.

As faith leaders, we acknowledge that all faiths affirm the dignity of human beings and so condemn sexual violence. We share a common understanding of our potential to mobilise people at all levels to work together to end sexual violence in conflict.  We will challenge the culture of impunity that exists for these crimes, and use our influence to mobilise and encourage leadership and commitment across governments, communities and religious institutions to protect human rights and provide safe spaces and support to survivors and their families.

Based on our discussions, we have determined the distinctive role of faith leaders in:

We have agreed to implement recommendations for collaborative action in these areas, as set out in the Report of the Inter Faith Consultation on Mobilising Faith Communities to End Sexual Violence in Conflict.  As faith leaders, we commit ourselves to take these actions:

We call on all faith leaders to join us in speaking out and to work together with governments, national and international stakeholders, and communities to help end the use of sexual violence in conflict.