[Episcopal Diocese of Atlanta] Death penalty opponents this week asked lawmakers to bring Georgia into line with all other states for how the state determines whether death row inmates are intellectually disabled.

When the U.S. Supreme Court ruled in 2002 that it is unconstitutional to execute people with intellectual disabilities Georgia was first to establish new rules. But, Georgia is now the only state to require the beyond a reasonable doubt standard, meaning that there be no doubt that an inmate is intellectually disabled. Of the states still executing prisoners, 24 require a preponderance of evidence and four use the clear and convincing standard, both less stringent levels of proof. 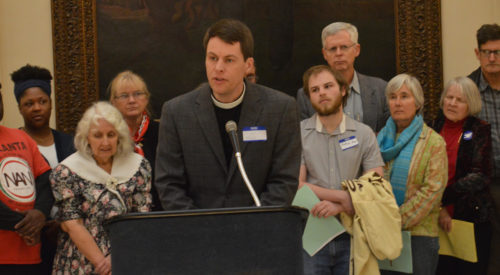 The Rev. Joseph Shippen of Christ Church, Macon, who represented Bishop Robert C. Wright at a press conference following the meetings with legislators, said that The Episcopal Church has since 1954 been on record opposing the death penalty.

“We cannot stand by and support our State treating human beings, God’s beloved children, as disposable objects,” Shippen said. Of particular concern, he said, is the increasing pace of executions.

“In 2015 alone, two men have already been executed, and as I speak Kelly Gissendaner is scheduled to be put to death on Feb. 25,” he said.

Gissendaner, convicted in 1998 of having her boyfriend kill her husband, would be the first woman executed in Georgia since 1945 when Lena Baker was electrocuted for killing her employer. Baker received a full pardon in 2005, when the Georgia Board of Pardons and Paroles agreed with her family’s argument that Baker acted in self-defense and should have been charged with manslaughter.

The first man put to death in 2015, Andrew Brannon, was a decorated Vietnam veteran who committed his crime as a result of his PTSD that he acquired in wartime, Shippen said. “What does it say about the way we treat veterans in our state when we execute those who struggle with the disabilities acquired as a result of heroic service on our behalf?”

Sara Totonchi, who heads the Southern Center for Human Rights, told an audience of about 30 gathered in the Capitol Rotunda,that despite the quickening pace of executions in Georgia there is reason for hope that the death penalty is nearing an end in the United States.

“Twenty years ago, the notion that the United States might abandon capital punishment was inconceivable,” Totonchi said. “In the past 10 years, however, we have witnessed a seismic shift in the opposite direction” with six states abandoning executing prisoners in the past six year.

She said that despite Georgia’s “thirst for vengeance and our politicians’ tough-on-crime mantras, the tide is turning here as well.” Last year, Totonchi said, there were 35 executions in just seven states, the fewest number is 20 years.

Shippen and Totonchi were joined at the press conference by representatives of the anti-death penalty group Georgians for Alternatives to the Death Penalty GFADP), the Georgia Council for Developmental Disabilities and longtime death penalty opponent Sen. Vincent Fort of Atlanta.

GFADP Chair Kathryn Hamoudah said, “Georgia’s legal system is once more bringing shame and embarrassment to our state by failing to protect those who are most vulnerable.

“We continue to set the bar for the most inhumane and unjust practices,” Hamoudah said. “Without intervention by the Georgia General Assembly, Georgia will undoubtedly continue to execute people with intellectual disabilities.”

Currently, no bills have been filed addressing the level of proof for establishing intellectual disability for death row inmates.

An article on the lobby day by death-penalty opponents appeared in the Feb. 11 issue of the Athens Banner-Herald

— Don Plummer is communications coordinator for community and media relations for the Diocese of Atlanta.