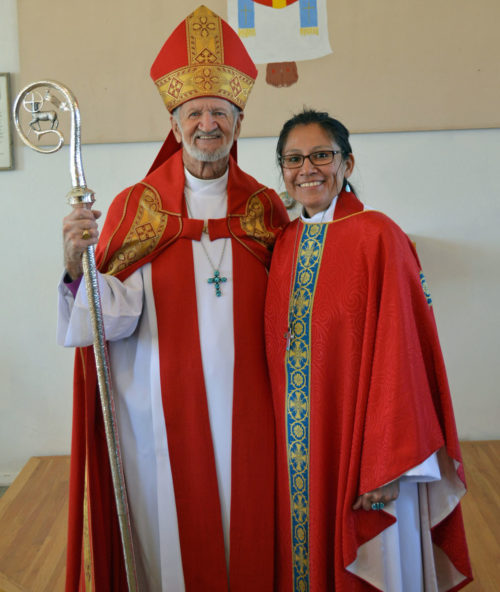 [Episcopal News Service] In a liturgy that combined Anglican and Navajo traditions, the Rev. Canon Cornelia Eaton was ordained priest in the Episcopal Church.

She serves as canon to the ordinary for Navajoland Bishop David Bailey, who ordained her.

The service took place Feb. 7 at All Saints Church in Farmington, New Mexico, where her late father, the Rev. Yazzie Mason, had served as deacon. Among the participants in the liturgy was her mother, Alice Mason, who served as lay pastor of St. Michael’s Church in Upper Fruitland, New Mexico, for 30 years. She was one of the presenters.

The liturgy included readings and hymns in English and Navajo, and smudging by Eaton and the Rev. Catherine Plummer, widow of the late Navajoland Bishop Steven Plummer.

Bailey noted that Eaton has “been on a journey that has led to her being a priest,” and that she had long served the Episcopal Church in Navajoland as a youth minister, lay leader and assistant to the bishop. 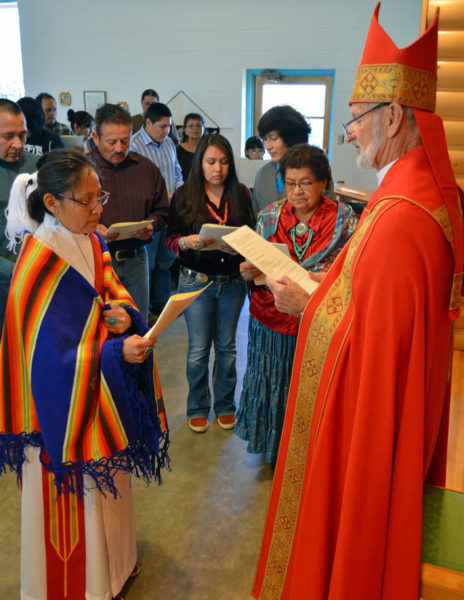 The Rev. Canon Cornelia Eaton is presented to Navajoland Bishop David Bailey for ordination to the priesthood Feb. 7 at All Saints Church in Farmington, New Mexico. Among the presenters is Eaton’s mother, Alice Mason (center), who served as lay pastor of St. Michael’s Church in Upper Fruitland, New Mexico, for 30 years. Photo: Dick Snyder

She also served as a chaplain for the last General Convention of the Episcopal Church, offering daily meditations and prayers for the House of Deputies. Eaton will be a Navajoland clergy deputy to the June 25-July 3 meeting of General Convention in Salt Lake City.

With Eaton’s ordination as priest, Bailey has ordained three Navajo, or Diné, as priests and three more as transitional deacons. There are another three Diné in the ordination process. Eaton is the fourth female Diné following Plummer, the Rev. Rosella Jim and the Rev. Inez Velarde.

Eaton has completed courses at Vancouver School of Theology in Vancouver, British Columbia, and training offered through the Bishops’ Collaborative of the Episcopal Church. This fall, she will enter Virginia Theological Seminary.

She celebrated her first Eucharist as priest on Feb. 8, with Bailey assisting.

— The Rev. Dick Snyder is missioner for special projects in Navajoland and is employed as a prison chaplain in Nevada.