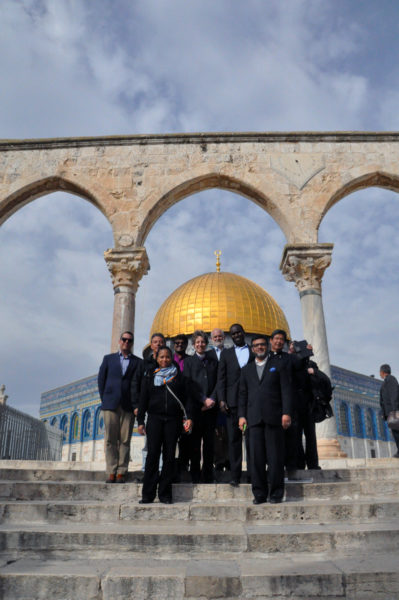 Members of the interfaith pilgrimage visit the Dome of the Rock and the Al-Aqsa Mosque, the third holiest site in Islam. Photo: Matthew Davies/ENS

[Episcopal News Service] Partnerships and investment, especially in supporting faith-based grassroots work, hold the key to lasting peace in Israel and the Palestinian Territories, a United States interfaith delegation heard repeatedly from religious leaders with whom they met during a Jan. 18-26 pilgrimage in the Holy Land.

The 15-member delegation of Jews, Christians and Muslims from the U.S. found this prevailing message in all their conversations, whether with rabbis, kadis (Islamic judges), priests or bishops.

Kadi Iyad Zahalka, head of the Sharia courts in Jerusalem, told the delegation that it is through these kinds of partnerships “that we will achieve understanding among all of the communities. This kind of action in bringing together Jews, Christians and Muslims is motivating to the people here to be more engaged in this kind of dialogue.”

Zahalka said that the politicians sign diplomatic agreements, “not the religious people. But our job is to prepare the people to be ready for that moment, to accept the peace process, to engage the peace process, to encourage our leaders. We strive to create the dynamic of peace, which is much more important than signing the contracts.”

But he acknowledged the concerns of extremism on both sides, such as the recent stabbing of 11 people by a Palestinian man on a bus in central Tel Aviv and the burning of an Arab-Jewish school by Jewish radicals. 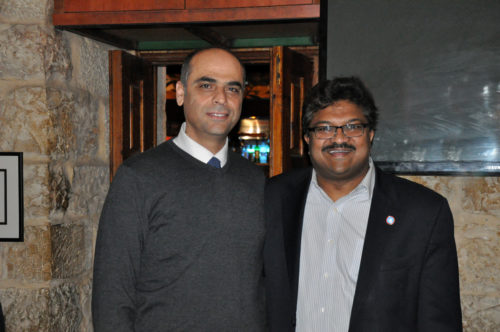 Rabbi Ron Kronish, director of the Interreligious Coordinating Council in Israel, works closely with Zahalka in promoting dialogue and peace, especially among religions.

Kronish talked about the complexities of identity that exist throughout Israel and the West Bank that often cause confusion when addressing issues of peace.

The interfaith pilgrimage was formed in response to the Episcopal Church’s General Convention Resolution B019, passed in 2012, that called for positive investment and engagement in the region and recommended that Presiding Bishop Katharine Jefferts Schori develop an interfaith model pilgrimage that experiences multiple narratives.

Committed to deepening their own partnership, the interfaith group shared in one another’s faith traditions, including services at the Anglican cathedral in east Jerusalem, a Jewish synagogue in west Jerusalem, and a rare, private tour inside the Dome of the Rock and the Al-Aqsa Mosque, the third holiest site in Islam, which normally are strictly closed to non-Muslims. 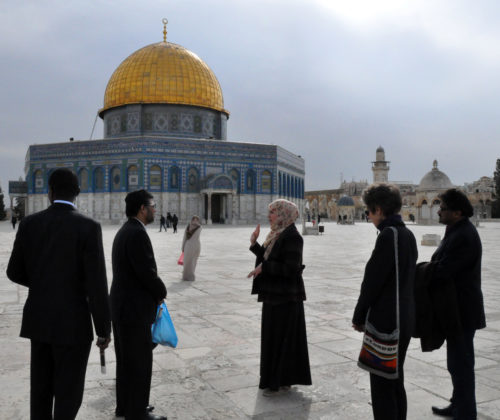 Members of the interfaith pilgrimage visit the Dome of the Rock and the Al-Aqsa Mosque. Photo: Matthew Davies/ENS

The group – led by Jefferts Schori; Rabbi Steve Gutow, president of the Jewish Council for Public Affairs; and Sayyid Syeed, national director of interfaith and community alliances for the Islamic Society of North America – was welcomed for a Sunday morning service at St. George’s Anglican Cathedral in east Jerusalem by its dean, the Very Rev. Hosam Naoum, and Archbishop Suheil Dawani of the Episcopal Diocese of Jerusalem. Jefferts Schori preached during the service. 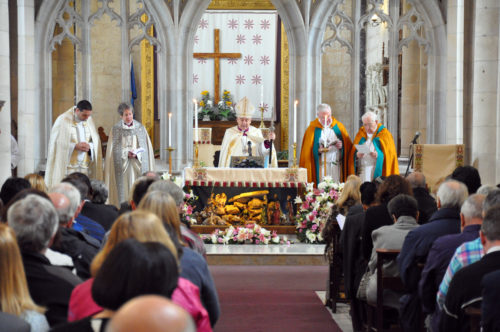 U.S.-based Episcopal Church dioceses and individuals have long been in partnership with the Jerusalem diocese and continue to support the ministry of its more than 30 social service institutions throughout Israel, Jordan, Lebanon, Syria and the Palestinian Territories. The institutions include schools, hospitals, clinics and centers for people with disabilities and serve those in need regardless of their religious affiliation.

The diocese and the institutions also are supported by the American Friends of the Episcopal Diocese of Jerusalem, a nonpolitical, nonprofit organization established in 1985. 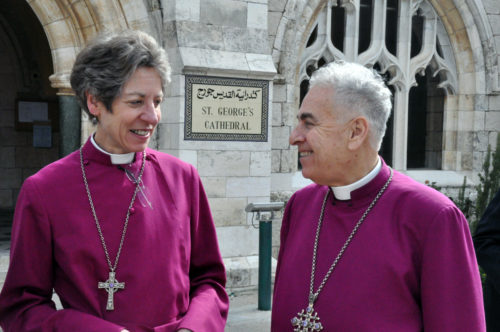 Dawani told the interfaith group following the service that religion needs to be part of the solution and not part of the problem. “We have a responsibility as leaders, and we have a duty to facilitate and bring co-existence among all the communities,” he said. “As the center of the three Abrahamic faiths, we pray that Jerusalem will be a model for future peace to the whole world.”

A source of major concern for the Jerusalem diocese is the many Palestinian and Israeli Christians who are leaving the Holy Land in search of better opportunities overseas.

Dawani has said that “investment is something we all need here in the hardships and difficult economic situation. Investment really will encourage people not only to stay here, but to feel that they can take care of their families and the future of their children.”

In response to such calls from the Episcopal Church’s partners in the Holy Land, as well as to Resolution B019, the Domestic and Foreign Missionary Society invested $500,000 in the Bank of Palestine in 2013 for the purpose of economic development in the Palestinian Territories. The Episcopal Church’s Executive Council recently endorsed expansion of that investment and commended the matter to the church’s economic-justice loan committee for study.

Following the service, Dawani accompanied the group for a visit to His Beatitude Theophilus III, Patriarch of Jerusalem and All Palestine, who said that their presence in the Holy Land brings “great encouragement and support to its people.” The patriarch is the senior leader of Greek Orthodox Christians in the Holy Land, and represents the longest continuing historical presence of any single religious institution in Jerusalem today. 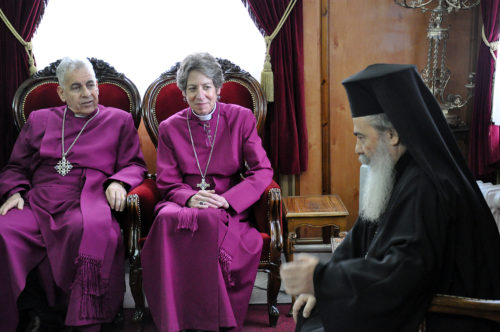 “It’s not an easy task to have such a unified voice as Jews, Muslims and Christians,” he said. “Bringing people together and working for reconciliation, this is what we are trying to do. People here use the word ‘tolerance’ which is totally unacceptable. We need to be talking about inclusiveness.”

The patriarch talked about the land being connected with the sacred histories of the three Abrahamic faiths and the conflict and misunderstandings that has caused. “How can we convince our people – Jews, Christians and Muslims – to have a different approach to the sacred history?” he asked. “The letter is killing, but the mind, or the spirit of the letter, is vivifying. How can we communicate this message to politicians, to diplomats? … They don’t understand what the sacred history means.”

“The problem is that people here understand the land in eschatological terms,” he added, “[But] we serve common human nature and common destiny … This is what we have to bear in mind if we want to believe that we are really people of God … This land is totally holy, and we share this land, all of us.”

Syeed responded to the patriarch by saying that his words were “soothing, inspiring and comforting … This is the land of manna and salwa,” the Hebrew and Arabic words that describe the food that God provided for the Israelites during their travels in the desert. 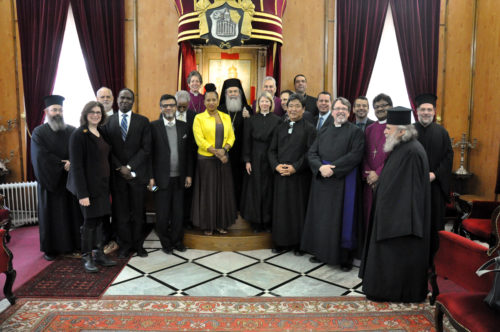 His Beatitude Theophilus III, Patriarch of Jerusalem and All Palestine, poses for a group photo with the interfaith delegation and Anglican leaders in the Holy Land. Photo: Matthew Davies/ENS

Two days earlier, the group attended a Friday evening synagogue service at Kol Haneshamah, a center for Progressive Judaism in West Jerusalem. Following the service, they were welcomed for Shabbat dinner at the home of Rabbi Levi Weiman-Kelman, a 10th generation rabbi whose congregation is committed to social justice and often leads peaceful demonstrations against violence, including whenever a mosque, synagogue or church is attacked. 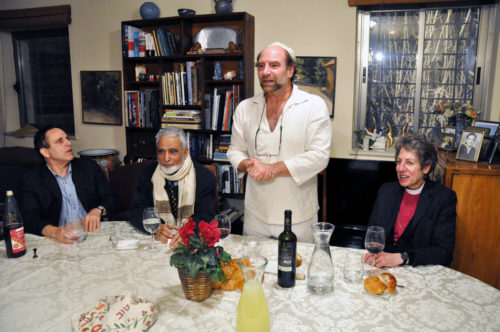 Weiman-Kelman shared a Jewish Midrash interpretation from Genesis that illustrates how the formation of the name Jerusalem was achieved through a compromise and consideration to the other.

Because of their own encounters of God, Abraham called the place Yireh, and Shem named it Shalem. According to Hebrew scripture, “The Holy Blessed One said: If I call it Yireh as Abraham called it, Shem a righteous man, will be upset. If I call it Shalem as Shem called it, Abraham, a righteous man, will be upset. Therefore I call this place as the two of them called it Yireh-Shalem, Yeru-shalayim, Jerusalem.”

Following Kelman’s reflection, Jefferts Schori said that she is invigorated by the bridges that have been built during the weeklong pilgrimage and that it reminds her of the creation story, the relationship between light and dark, earth and sky. “At first it looks like division,” she said, “but it’s a good lesson in the importance of interconnection.”

Earlier in the week, Rabbi David Rosen, Jerusalem-based international director of interreligious affairs for the American Jewish Committee, spoke about a new age of interfaith relations in the Holy Land, which finds religious leaders engaged in deeper, more effective partnerships, particularly through the Council of the Religious Institutions of the Holy Land.

Established in 2005, the council facilitates the ongoing engagement of the leadership and representation of the official religious institutions of the Jewish, Christian and Muslim faith communities in the Holy Land.

In introducing Rosen, Gutow said that the former chief rabbi of Ireland has been a leading force in interreligious dialogue and “really exemplifies interfaith relations in this region.”

But Rosen acknowledged the need for greater efforts to include religious voices in political spheres.

“There is an attitude among politicians not to risk doing anything with religious leaders. If the parties brought in religious voices it would have an enormously powerful effect. But they prefer inertia over risk.” 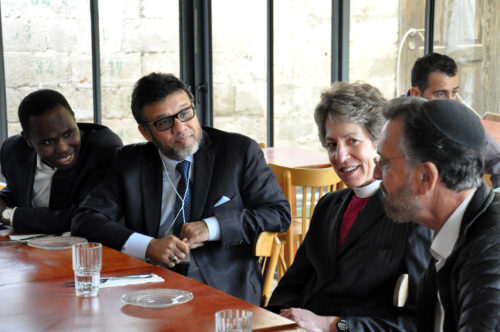 Towards the end of the pilgrimage, Kronish of the Interreligious Coordinating Council in Israel echoed much of what Rosen had said. “The 1990s was a period of high hopes for peace, but since 2000 the situation has been deteriorating,” he said, noting that the last significant peace agreement between Israeli and Palestinians leaders was the Wye River Memorandum in 1998.

“So we’ve had 16 years, a lot of talk, and really no product. The question is how much further down can we go? The greatest obstacles to peace are political despair. Nobody feels like there is a resolution in sight,” he said. “We don’t have right now hope in our political leaders on both sides. They don’t seem willing to make the painful compromises that are needed” to reach a peace agreement.

“Where we have found hope is working with youth, young adults, women, with religious leaders at the grassroots levels, with educators, with the people who are doing hard educational and spiritual work in the trenches and not in the political arena.”

Jefferts Schori described peacemaking as “the work of building bridges of relationship between human beings … That requires personal risk-taking, vulnerability, and the ability to see and hear the partner’s deep human desires.”

Gutow, reflecting on the pilgrimage said: “We must stand with those who can both understand and speak with integrity about the differing narratives of the regular people who make their homes there. We must provide them with the platforms and the financial support and the validation they need to succeed.

“The job of our pilgrimage is to serve as an interfaith witness to the truths of both sides and to help the good and kind people who dwell there find the peace and wholeness and calm they so desire and so deserve.”