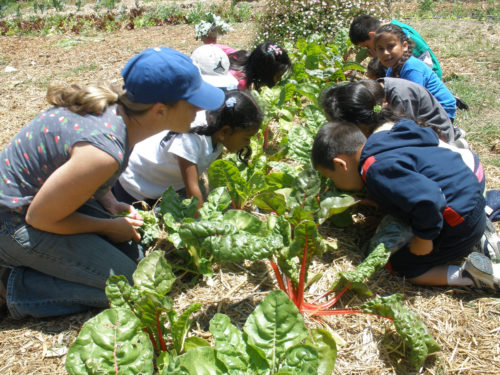 When kids get out into the natural world they develop a sense of awe and wonder, and are more likely pay attention of environmental issues as they get older, says Cindy Coe, one of two environmental stewardship fellows. Here Erynn Smith, Abundant Table’s director of farm education, shows some young students how look for bugs in the field. Photo: The Abundant Table

[Episcopal News Service] The Episcopal Church is addressing the call of the fifth Mark of Mission to strive to safeguard the integrity of creation and sustain and renew the life of the earth in a number of ways, including through the Domestic and Foreign Missionary Society’s support for the work of two women who want to bring Episcopalians of all ages in closer touch with the earth.

In Tennessee, Cindy Coe’s focus is “getting children outside” to grow a lifelong concern for creation and, in California, Sarah Nolan’s is helping the church see “good agriculture and good food as a justice issue.”

Each of them is six months into a two-year, $48,000 environmental stewardship fellowship awarded by the Domestic and Foreign Missionary Society to provide leadership on key environmental issues in U.S. communities.

“The environmental fellowship program represents a new way in which the Domestic and Foreign Missionary Society is engaging and supporting mission at a local level,” said Alexander D. Baumgarten, director of public engagement and mission communication for The Episcopal Church.

“Conceived and awarded through a process of consultation that included members of the Executive Council, bishops and other leaders, and key stakeholders in environmental ministry, the fellowships allow the Domestic and Foreign Missionary Society not only to support innovation and creativity at a local level, but to ensure that it becomes a gift to the wider Church,” said Baumgarten.

“The Justice and Advocacy Mark 5 Fellowships are crucial to the future of our Church as we seek to reconnect with our food sources, lift up the intersections of poverty and environmental issues, and understand what we can do as individuals and church communities to mitigate and adapt to our changing climate,” said Jayce Hafner, domestic policy analyst in the Domestic and Foreign Missionary Society’s Office of Government Relations. 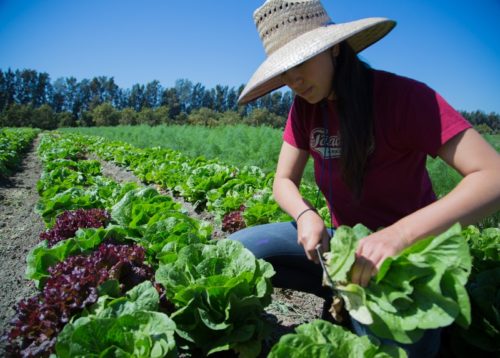 Nolan, she said, “will grow networks of communities striving for conscientious consumption (for example, procuring elements of worship from local growers) and dedicated to learning more about how our food is produced.”

Coe’s fellowship involves what Hafner called “the next generation of leaders” who are “an essential contingent of our Church.”

“Through educating youth at summer camp, an environment where self-awareness and creative expression is encouraged, she will empower future leaders to leverage their gifts for the ecological well-being of our Church and our world,” she said.

Hafner looks “forward to seeing the fruits of these fellows’ efforts, and am already very impressed by how much they have accomplished thus far,”

Coe’s interest in environmental stewardship issues was rooted when she developed Episcopal Relief & Development’s Abundant Life Garden Project with Brian Sellers Petersen, who is now senior advisor to the president of Episcopal Relief & Development. The project is an interactive, Scripture-based program that invites elementary school-aged students to explore the organization’s work through the themes of water, seeds, soil, animals and harvest.

The curriculum for dioceses, congregations and other Episcopal institutions that Coe is devising during the life of her fellowship is an outgrowth of that project and will involve a healthy dose of getting kids outside, “spending time in nature and experiencing the environment,” she said.

“I would like to introduce creation care as part of Christian formation of children and youth in our church,” she said.

Saying she has “really done a deep dive” into secular research on environmental education, Coe believes that such education is connected to wellness, developing spirituality and becoming aware of the social-justice issues connected to the care of creation.

Getting children connected to nature means “they will become attuned to environmental issues and stick with it for life,” Coe said.

Her research has also included debriefing her 10-year-old son, Jack, about what he liked and didn’t like at various summer camps. “He has been an invaluable resource,” she said with a laugh. “He’s given me some really valuable information about what works, what’s effective, what was fun, what was boring.”

“As far as teaching about nature, we have to get kids outside,” she said, adding that research shows children like to find a special place outside to make their own. Part of the budding curriculum will encourage children to “go out, find a special place, build a fort and have fun with it.”

By doing that sort of thing, children develop a sense of place, Coe said, and “they learn to appreciate God’s creation.”

“You learn a sense of awe, a sense of wonder and that links into spirituality,” she said. St. Francis and other saints understood and honored the connection between nature and spirituality, Coe added, but “that’s something that we’ve either forgotten or neglected in our Christian history lately.”

Yet, “Kids get this. Kids can be silent in nature better than the rest of us,” she said.

Coe has been asking for feedback from colleagues around the church on the parts of the curriculum that she has completed. She plans to discuss it at late January meetings of the Episcopal Camps and Conference Centers organization and of FORMA, a group of Episcopal Church formation ministers.

The curriculum, which can be used in whole or in part, will be available to be field tested in the summer of 2015. She will then tweak the materials with feedback she gets. The sections of the curriculum that are currently available can be found here. That page also includes a method for giving Coe feedback.

The next step is to find a way or ways to publish the curriculum before the summer of 2016.

Nolan is the director of programs and community partnerships for The Abundant Table, a Ventura County, California, sustainable farm that offers “faith-rooted, land-based and farm-to-school experiential learning opportunities for school-aged children, youth, young adults and communities,” according to its website. The organization also provides greater access to sustainably grown foods for residents of the southern California county.

Its roots date to the mid-2000s when Nolan was campus chaplain at California State University, Channel Islands. The chaplaincy decided to start a program through the Episcopal Service Corps, a partner of the Domestic and Foreign Missionary Society, in a rural setting and bring the campus ministry and the wider community to that work. As the farm grew, young adults approached the ministry expressing an interest in connecting their interest in food justice to their faith life. Their interest overran the farm’s number of internship placements, Nolan said. 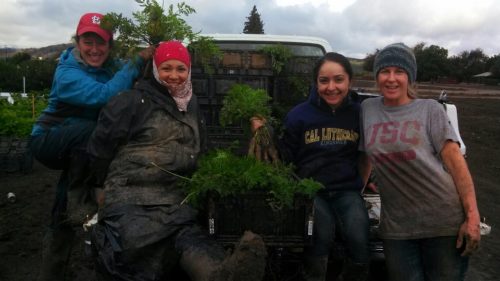 She began looking for other places where those young adults might work. That exploration led in 2012 to a fellowship from the Episcopal Church Foundation to begin to grow a network of folks doing land-based ministry and identifying resources for those ministries. Soon she was in touch with a number of people, among them Brian Sellers Peterson, with whom Coe had worked with on the Abundant Life Garden project. Sellers Peterson had been looking at food-based ministries around the church and connected her with the Beeken Center, part of the University of the South’s School of Theology. She, Sellers Peterson and the center began developing an informal network of ministries. That work led to her application for the environmental stewardship fellowship, she said.

Strengthening the loose network that already exists among the church’s food-growing and food-sharing ministries could impact both the church and the communities in which is present in two ways, Nolan said.

One is involves connecting church pantries with church-supported gardens and farms, while also looking at the potential of the church’s buildings and lands to see how they could be “used and coordinated in such a way that it makes an impact on the local communities and the food system” in those communities.

Secondly, Nolan notes that there is “a lot of work going on around theology, liturgy and spirituality that’s really rooted in the earth, environmental stewardship and creation care.” She sees an opportunity to help people share those resources in order to “connect folks to a growing spirituality that would have an impact on the spiritual life of the church [by] invigorating and renewing the theological and spiritual life of the church.”

“The term that’s been thrown around quite a bit is looking at soil as sacrament,” Nolan added.

At the end of her fellowship time, Nolan said, she hopes to have developed a website or some other platform, modeled on the practices of Story Corps, where Episcopalians involved in food-based ministries can share their stories as “encouragement and also as an inspiration” to the church. Her other hoped-for outcome is the formation of a functioning network that can hold gatherings and support regional and national efforts.

And, Nolan said, her work is not just for people already involved in such ministry.

“It’s important for the church to see how the growing and sharing of food is an open door to understanding environmental sustainability and stewardship,” she said.

Often environmental conversations center on climate change and conservation of natural spaces, which Nolan acknowledged as important, but she said the church’s food, farming and gardening work can be a way for people who might not be inclined to participate in those conversations to get involved. By participating in such work, they can discover the links between environmental concerns and seeing “good agriculture and good food as a justice issue.”

The 2013-2015 budget passed by General Convention is structured around the Anglican Communion’s Five Marks of Mission and provided significant unallocated sums for new work targeted around each Mark of Mission. The intention was that the resulting work would be done in new, collaborative partnerships with dioceses and congregations. The Domestic and Foreign Missionary Society has provided seed money and/or matching grants as well as staff support and expertise for the new work.

Coe’s and Nolan’s fellowships are support out of the budget allocations for Mark Five: To strive to safeguard the integrity of creation and sustain and renew the life of the earth.

The recently released Report to the Church details the budget-supported work of the Domestic and Foreign Missionary Society to date in the current triennium.