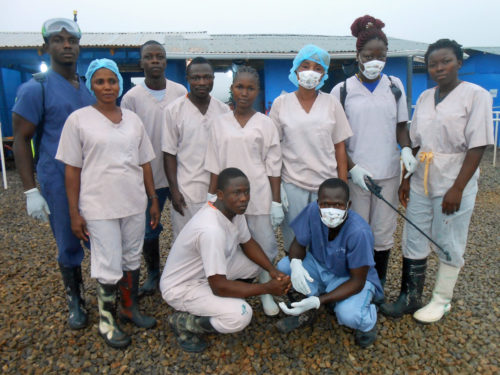 Editor’s note: This story was updated Jan. 30 at 6:10 p.m. EST to change donation information at end.

[Episcopal News Service] The Liberian government’s push to reopen the Ebola-stricken country’s public and private schools and universities in February is once again highlighting both the importance of The Episcopal Church of Liberia’s Cuttington University to the country and its precarious financial situation.

The government’s order calls for the country’s 5,000 public and private schools, which have been closed since the end of July by order of the government, to reopen Feb. 2. While the Liberian diocese’s 35 secondary schools are planning to welcome students that day, Cuttington’s three campuses have government approval to postpone reopening until Feb. 16 because of the magnitude of the undertaking, according to the Rev. Canon James Callaway, general secretary of the Colleges and Universities of the Anglican Communion.

Cuttington University’s main campus is in the interior of the central region of Liberia in Suakoko District about six miles from Gbarnga, the capital of Bong County. Bong County is one of the epicenters of West Africa’s Ebola outbreak. University personnel reached out to surrounding communities during the worst of the epidemic while worrying about the epidemic’s impact on the university’s future and mourning the loss of graduates and friends. Many of the graduates who died from Ebola were health-care workers.

Cuttington, founded in 1889 in Liberia by the U.S.-based Episcopal Church, has two other campuses, a graduate school in the country’s capital, Monrovia, and a community college nearly 45 miles south of Monrovia.

The planned resumption of school in Liberia is “a sign of the country coming back,” said the Rev. Ranjit Matthews, the Domestic and Foreign Missionary Society’s network officer for mission personnel and Africa.

“Cuttington’s coming back will be a big step in Liberia’s recovery from the Ebola crisis just as its reopening was in 2004 before the civil war was over,” added the Rt. Rev. Herbert Donovan, president of the American Friends of Cuttington University.

Cuttington has not been dormant during the six-month closure. The International Medical Corps was contracted by the U.S. Agency for International Development to operate a 70-bed Ebola Treatment Unit near the university and asked Cuttington for help.

“Graciously…, major facilities including dormitories, staff housing, warehouses, fuel farm, cafeteria, kitchen (and) fields amongst others were all put at the disposal of these partners who hath come to assist our beloved nation in this great battle for survival,” Provost E. Lama Wonkeryor wrote Jan. 27 in a 13-page status report.

Cuttington University houses the medical organization’s staff, and it is also the base of its Multi-Agency Training Collaborative, which trains health workers to manage Ebola cases in Ebola Treatment Units, according to Lisa Ellis, the group’s director of global communications. 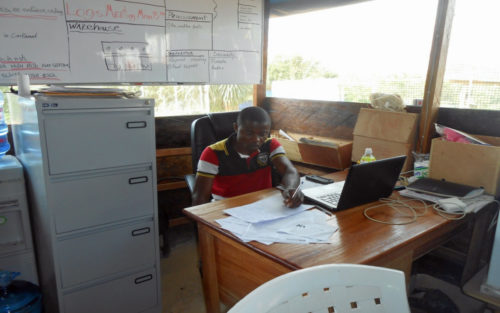 Some of Cuttington’s faculty, staff and students have been working in the nearby treatment unit while waiting for school to resume, the provost said.

In addition, the U.S. Navy opened a mobile Ebola laboratory in Cuttington’s new multimillion-dollar College of Allied Health Sciences building in early October. Opening the lab cut the wait time for Ebola blood test results from three to four days to three to four hours, thus also reducing exposure to the virus for those who are not infected.

“The structure has not even been dedicated,” Wonkeryor wrote of the College of Allied Health Sciences building. “But since indeed the university is committed to serving humanity, this almost priceless offer was made to help save the lives of Liberians.” 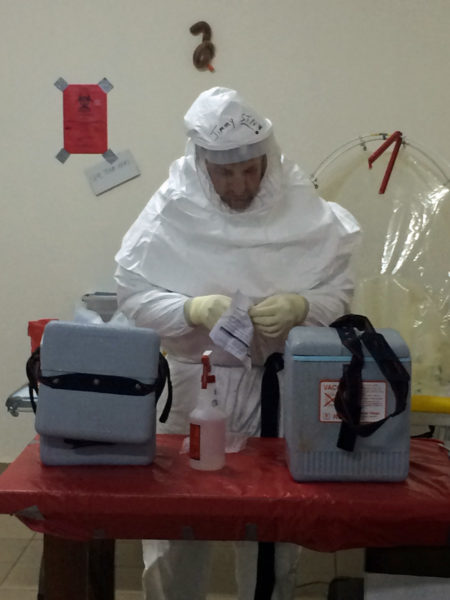 Lt. James Regeimbal Jr., a microbiologist working with the Navy team that set up such labs all over the country, wrote that during the first 60 days “we were the only lab accessible to rural Liberia testing samples for seven of the large outer counties. Our location and rapid testing meant that all the outer counties could get same-day results.”

Archbishop Jonathan Bau-Bau Bonaparte Hart of Liberia issued an appeal Jan. 10, asking for more than  $1.3 million to get Cuttington ready to open. The largest part of that appeal covers the cost to bring the teachers back, including more than $740,000 in back pay and resettlement costs. Many faculty members are foreign nationals who traveled home during the worst of the Ebola epidemic and now the school would like them to come back, Hart wrote.

The faculty has not been paid since the university had to close its campuses in August, according to a document outlining the school’s needs. Cuttington is financially dependent on tuition to pay its faculty and cover other operational costs.

“In addition to paying staff salary arrears, there is also the need to add some token as compensation package to assist staff in offsetting some of their financial challenges from the time of closure of schools up to the present,” Wonkeryor wrote in the appeal document. “Such a gesture will go a long way in helping them to resettle, and be mentally and physically prepared for work.”

The remaining $644,000 of Cuttington’s appeal is needed for things such as chairs and desks for both classrooms and teachers’ offices, dormitory and cafeteria renovations, materials to guard against the spread of Ebola, medications for the school’s clinic, new generators for the main campus and the graduate school in Monrovia (and servicing of existing generators), five new vehicles for use by the administration and for transporting students and generating revenue, and a lawn mower and tractor for maintaining the main campus.

The Navy is running the campus generator to power its laboratory, making this one of the first times in Cuttington’s history that it has had round-the-clock power. However, that generator is reportedly wearing out and the appeal from Hart includes $60,000 to replace it.

Cuttington must also settle bills with its suppliers and deal with its bank overdrafts.

The provost’s summary includes a budget and explanation of the issues surrounding each of the areas needing attention and money. Hart noted in an e-mail sent with the appeal that the Liberian diocese was exploring financial and other assistance locally.

Still, Donovan said the university is looking more broadly for help. “As anyone who has been through a disaster knows, help from your friends and neighbors makes a world of difference,” he said. Donovan spearheaded a campaign in 2004 after the second Liberian Civil War to replace zinc roofs which had been ripped from Cuttington’s buildings by looters

In his appeal, Hart called Cuttington “a pride of The Episcopal Church of Liberia” and Matthews said Cuttington is known as the “Harvard of Liberia.”

Student Chris N. Kollie, who works spraying disinfectant, and nursing student Sophie Jarpa, who is a wash supervisor, are on active duty at the Bong County Ebola Treatment Unit while the county enjoys “zero new case” status for more than one month running, thanks in part to the volunteers and the administration of Cuttington University. Photo: Cuttington University

Hart said in his appeal that Cuttington’s residential nature makes it very expensive to run.

The current Ebola outbreak began in Guinea in December 2013 and now involves Guinea, Liberia and Sierra Leone, according to the United Nations’ World Health Organization. Since then there have been more than 21,000 reported confirmed, probable and suspected cases of the disease, and more than 8,600 deaths, WHO said Jan. 21, noting that outcomes for many cases are unknown. Incidences of new cases of Ebola have declined from a peak of over 300 new confirmed cases per week in August and September 2014 to eight confirmed cases in the seven days ending Jan. 18, the organization said.

The United Nations said Jan. 19 that the Liberian government had announced that the past week had seen no new Ebola cases in 12 of the country’s 15 counties.

Matthews participated in an Anglican Alliance teleconference Jan. 22 during which Hart noted that while Ebola cases in West Africa have dropped considerably, there is still much work to be done. Hart, as head of the Internal Province of West Africa in the Church of the Province of West Africa, oversees the Anglican Communion bishops from Guinea, Guinea Bissau, Cape Verde, Sierra Leone, Gambia, Cameroon and Liberia. He thus has a broad view of the devastation and challenges wrought by the Ebola epidemic.

The country’s Ministry of Education has published protocols for a safe school environment, which call for all places of learning to introduce mechanisms for keeping Ebola out of the classroom, according to news reports. They include temperature checks, hand-washing stations, a referral system and the capacity for temporary isolation should a student fall sick.

To help Cuttington’s efforts to re-open, donations may be made to the Friends of Cuttington Inc., a 501(c)3 organization whose purpose is “to solicit and receive donor contributions to scholarships and programs of Cuttington University in Liberia (tax exempt).” Checks should be made payable to Friends of Cuttington and sent in care of the Domestic and Foreign Missionary Society, 815 Second Ave., New York, NY 10017.