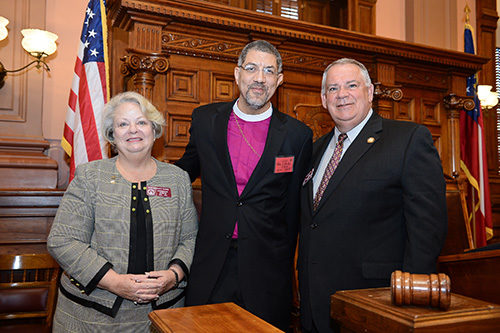 Bishop Rob Wright pauses with Rep. Mary Margaret Oliver of Decatur and Speaker of the House of Representatives David Ralston in February 2013 on the occasion of Wright’s speaking to the House. Photo: Don Plummer

[Diocese of Atlanta] Those recognized as Georgia’s 100 most influential people recognized Jan. 27 at a luncheon given by Georgia Trend magazine included Bishop Rob Wright.

Georgia Trend included Bishop Wright in the listing with the state’s U.S. senators, the chancellor of the university system and business leaders for “wading into the gun debate, urging its defeat and then the veto of HB60, the concealed carry law,” and, when the bill passed, for banning guns in Episcopal churches in Middle and North Georgia. He was also noted for his support of blessing same-sex relationships.

Bishop Wright’s  inclusion was also notable for being the only clergy member on the 2015 list.

Bishop Wright’s wife, Dr. Beth-Sarah Wright, accepted the honor at an Atlanta luncheon. The bishop, who was at the Harvard Kennedy School at a course on Leadership for the 21st Century, issued a statement on being included in the Georgia Trend listing.

“Thank you for this unexpected recognition. I am honored to be included among Georgia’s most influential men and women. I am particularly pleased that Georgia Trend magazine included someone from the faith community. And so I accept this honor in the name of the Episcopal Diocese of Atlanta and every person of good faith throughout our state.  It is my faith that puts me alongside of Georgians of all kinds to achieve a more educated, less violent, more understanding Georgia, which I pray one day soon will be free from the scourge and shame of capital punishment. Again, thank you.”

Ben Young, associate publisher of Georgia Trend, said Bishop Wright was selected because of the impact of his actions.

“We research news stories and identify people who are making a difference,”  Young said in an interview prior to today’s event. “We chose (Bishop) Wright because his activities on health care and the gun issue were getting noticed.”