[Anglican Communion News Service] The Service of Consecration and Ordination of Kenneth Kearon as the new Bishop of Limerick and Killaloe took place at Christ Church Cathedral, Dublin, Jan. 24 on the Eve of the Conversion of St Paul. 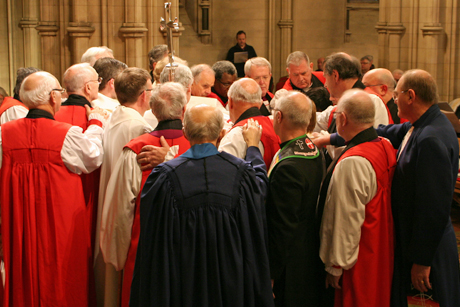 A large number of bishops — both Anglican and Methodist – participate Jan. 24 in the ordination and consecration of Kenneth Kearon as Limerick and Killaloe. Photo: Church of Ireland

The preacher at the service, Archbishop of Wales Barry Morgan, , said: “Life as a bishop is like a ride on a zip wire … Just as zip wire riders need someone to launch them at the start and haul them in at the end, so too a bishop sets people off on their sometimes daunting journeys of faith and holds them safe as they travel.’ More than that, though, he added, ‘a bishop is someone who climbs onboard the ride first – to lead by example’.”

As well as Morgan and a number of serving and retired bishops of the Church of Ireland – including the Rt. Rev. Sam Poyntz, the new bishop’s father-in-law – Kearon’s consecration brought together a large number of attendees from across the Church of Ireland, the wider Anglican Communion and, notably, the Methodist Church in Ireland also. The president of the Methodist Church in Ireland, the Rev. Peter Murray, along with the Rev. Donald Ker, former president and general secretary of the Methodist Church in Ireland, and former president and co–chair of the Covenant Council, the Rev. Winston Graham, joined with other bishops in the laying on of hands on the new bishop – the first time that participation by Methodist leaders has taken place. Since the decision of both the General Synod and the Methodist Conference allowing for the inter-changeability of ministry, Methodist presidents are now regarded as Episcopal ministers and as such can participate in a consecration service.

The service was led by the Archbishop of Dublin Michael Jackson, Bishop of Meath and Kildare Pat Storey, and Bishop of Tuam and Killala Patrick Rooke were co–consecrators.

The first reading from Numbers 27: 15–20, 22–23 was read by one of the new bishop’s three daughters, Rachel Kearon; the second reading from 2 Corinhtians 4: 1–10 was read by the Rev. Gillian Wharton and the Gospel, John 21: 1–17, was read by the R.t Rev. James Tengatenga, chair of the Anglican Consultative Council. The Choir of Christ Church Cathedral sang Mozart’s Coronation Mass during the Eucharist.

Kearon was also surrounded by many family and friends at the service, including his wife, Jennifer, and two of his three daughters – Alison and Rachel (pictured right); his daughter Gillian is living in New Zealand and was unable to attend. Kearon’s mother, Ethel Kearon, was joined by his sister, Lynda Goldsmith.

Born in Dublin in 1953, Kearon attended Mountjoy School and Trinity College, Dublin, where he studied Philosophy. Following further study at Cambridge and in Dublin, he was ordained a priest in 1982 and served as curate in All Saints Raheny and St John’s Coolock before his appointment as dean of residence at Trinity College, Dublin. In 1991 he became rector of Tullow before becoming director of the Irish School of Ecumenics in 1999 and secretary general of the Anglican Communion in 2005, the role which he performed until late last year.

Kearon is no stranger to Christ Church Cathedral, Dublin, having been a member of the chapter since 1995 and served as its chancellor from 2002. In September 2014, he was elected bishop of Limerick and Killaloe following a meeting of the Episcopal Electoral College which took place at Christ Church Cathedral, and he succeeds the Rt. Rev. Trevor Williams who retired as Bishop of Limerick and Killaloe in July last year.

Enthronement services in the cathedrals in his new dioceses will take place at later dates.

Extracts from the sermon given at the consecration by Morgan are included in the full ACNS story here.