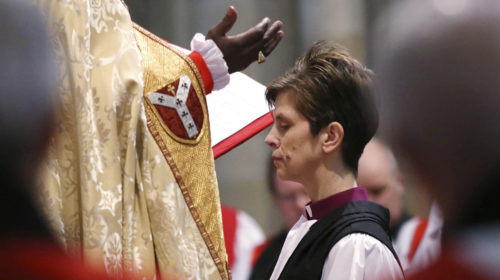 Archbishop of York John Sentamu prays over the Rev. Libby Lane during her ordination and consecration as the first female Bishop in the Church of England at York Minster in York, northern England Jan. 26. Photo: Reuters/Lynne Cameron

Lane became the eighth bishop of Stockport and will serve as a suffragan (assistant) bishop in the Diocese of Chester.

Lane was anointed with oil by Archbishop of York John Sentamu, who later gave her a Bible.

Libby was first presented by the Bishops of Chester and Exeter (the Rt. Rev. Peter Forster and the Rt. Rev. Robert Atwell) and surrounded by fellow bishops at the foot of the nave platform, according to a Diocese of Chester press release.

Archbishop of Canterbury Justin Welby attended as did other senior Christian pastors and faith leader, the release said. 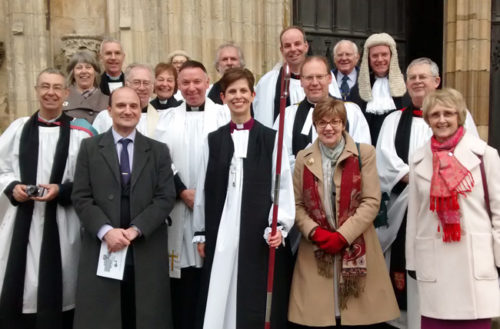 At the end of the service she was given a pastoral staff and went in procession outside the minster where she was photographed and filmed by various media. The consecration was filmed by the major British broadcasters and shown on lunchtime news programs across the various networks, including BBC, Sky News and ITV. The historic event was covered by media from around the word, according to the Chester diocese.

The service was interrupted by a lone protester, the Rev. Paul Williamson, the Associated Press reported. He stepped forward and objected when the congregation was asked if it was their will that Lane be ordained. Williamson said “No!” and asked to speak, arguing there was no precedent in the Bible for women bishops.

Lane remained stoic. Sentamu seemed prepared, according to the AP report, and answered with a prepared statement, a nod to the controversy that led to this moment.

Sentamu then simply moved on, asking the packed church once again if they approved. This time, the response was a thunderous “Yes!”

Lane was appointed Dec. 17. Her appointment and the ordination and consecration on Jan. 26 followed more than a decade of often-emotional debate accompanied by various stages of legislative action. The Church of England voted in July to allow women to become bishops, a decision that was later approved by the U.K. Parliament and given the assent of Queen Elizabeth II. The approvals were required because the church’s decision effectively changed English law. (The Church of England is an officially established Christian church with Queen Elizabeth II as its supreme governor.)

Libby will be installed in a separate ceremony March 8 at Chester Cathedral.

In a statement shortly after being consecrated, Libby said she had been encouraged by the thousands of messages of support she has received since the news of her appointment was announced. She said:

“Archbishop Sentamu has observed, ‘the way that we show our faith and our love for one another is with two simple things, prayer and parties.’ Today is an occasion of prayer and of party – and I am thrilled that so many want to share in both. I cannot properly express how encouraged I have been in the weeks since the announcement of my nomination, by the thousands of messages I have received with words of congratulation, support and wisdom. I’ve heard from people of all ages, women and men – people I have known for years, and people I have never met; people from down the road, and people from across the world. 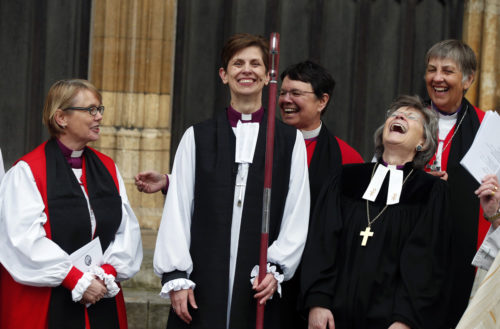 The Rt. Rev. Libby Lane, the first female bishop in the Church of England Libby Lane laugh with other bishops after her consecration service at York Minster Jan. 26. The other bishops include Church of Ireland Bishop of Meath and Kildare Pat Storey (left), Diocese of Long Island Assistant Bishop Chilton Knudsen (behind Lane) and Anglican Church of Southern Africa Diocese of False Bay Bishop Margaret Vertue (upper right). At Lane’s left is Regionalbischöfin (Regional Bishop) Susanne Breit-Keßler of the Kirchenkreis München und Oberbayern (Church District of Munich and Upper Bavaria of the Evangelical Lutheran Church in Bavaria). Photo: Reuters/Phil Noble

“Many those who have been in touch have little or no contact with the Church of England; not all have been people of faith, but every one of them has felt this moment marks something important. That all this personal – and media – attention has centred on me has been a little overwhelming: I cannot possibly live up to everyone’s expectation. And so today, at my consecration, I hold on to words of promise from the Bible, a reassurance that all this does not depend on me … ‘the God who calls you is faithful: He will do it’ (1 Thessalonians 5:24).

“My consecration service is not really about me. With echoes of practice which has been in place for hundreds of years in the church, it is a reminder that what I am about to embark on is shared by the bishops around me, by those who have gone before me and those who will come after. It places the ministry of a bishop in the context of the ministry of all God’s people. And most importantly it retells the good news of Jesus, the faithful one, who calls each of us to follow him.

“Thank you to all who are praying for me and partying with me today. Please continue to hold me in your prayers as, after the example of St. Timothy and St. Titus who are celebrated by the Church on this day, I share in work of proclaiming the gospel, in word and action, and bearing witness to the name of Jesus.”

Sentamu said after the service that history had been made in York Minster. “It is a momentous occasion: a solemn act of worship and a jubilant celebration. I was thrilled to be presiding at the service,” he said. “Jesus Christ calls ordinary people like you and me to serve him joyfully and confidently. We are simply called to serve.”

More biographical information about Lane is included in this story.