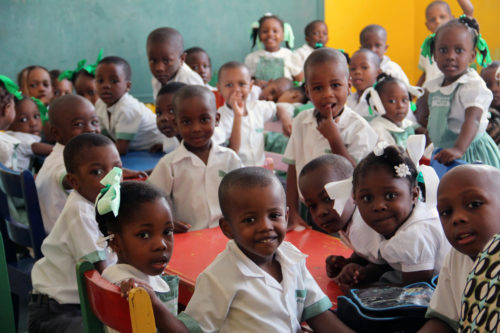 [Episcopal News Service] Students filled the primary and secondary school classrooms at Trinity Cathedral complex in Port-au-Prince, music students continue training in what was a convent, and a covered, temporary worship space has been constructed on the grounds, all signs of life noted by Presiding Bishop Katharine Jefferts Schori when she visited the cathedral during a mid-December visit to Haiti.

“The Episcopal Church in Haiti continues to play a major and essential role in this renaissance.  The cathedral church in Port-au-Prince was long seen as the spiritual and cultural soul of Haiti.  Today, its bells are quiet (in storage), its world-renowned murals largely destroyed (three have been preserved for reuse), and its naked altar platform awaits the cathedral’s rebuilding,” said Jefferts Schori in a statement released by The Episcopal Church’s Office of Public Affairs on Jan. 8.

“The cathedral grounds are lively, with primary and secondary school now serving more children than before, a music school that continues to train internationally renowned choirs and instrumentalists, and a trade school that is rising from the spot where bodies lay for days in the ruins of its former collapse.”

On Jan. 12, 2010, Haiti suffered a magnitude-7, catastrophic earthquake that killed more than 300,000 people, left as many wounded, and displaced more than 1.5 million people, in what was one of the world’s worst natural disasters in recent history. The Episcopal Diocese of Haiti, numerically the largest of The Episcopal Church’s 109 dioceses, in a matter of seconds lost 80 percent of its infrastructure in Port-au-Prince and Léogâne, the epicenter of the earthquake less than 20 miles west of the capital. 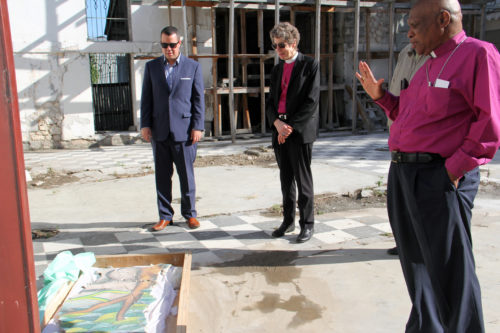 Presiding Bishop Katharine Jefferts Schori, Haiti Bishop Jean Zaché Duracin and Alexander Baumgarten, director of the Domestic and Foreign Missionary Society’s Department of Public Engagement and Mission Communication, look at one of the three surviving cathedral murals from among the 14 world-famous ones that adorned the walls of the previous cathedral depicting biblical stories and religious scenes in Haitian motifs. The surviving murals are stored on the cathedral grounds. Photo: Lynette Wilson/ENS

In the earthquake’s immediate aftermath, governments and international relief agencies committed billions of dollars in aid to rebuild the Caribbean nation, long considered the poorest in the Western Hemisphere.

“On January 13 of that year, the world was in Haiti helping us,” said the Rt. Rev. Ogé Beauvoir, bishop suffragan of the Diocese of Haiti, in a statement commemorating the fifth anniversary of the earthquake. “In March 2010, I was at the United Nations Headquarters in New York City watching the whole world pledge about $11 billion dollars to help rebuild Haiti.”

The 1.5 million displaced people sought shelter and humanitarian relief in 1,500 tent cities that formed in the earthquake’s aftermath. And for months it was almost impossible for vehicles and pedestrians to navigate most of the streets of the capital, Beauvoir said. 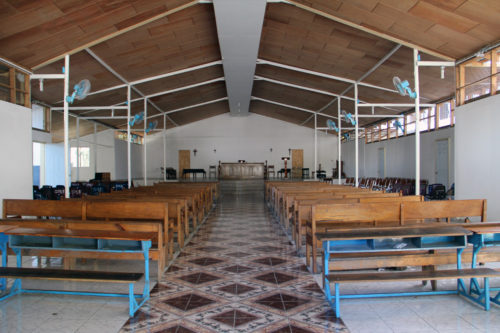 For now, members of Trinity Cathedral gather at a temporary, covered worship space on the cathedral grounds. Photo: Lynette Wilson/ENS

In addition to the progress visible on the campus of Holy Trinity Cathedral, progress can be seen in the way that streets have been cleared of rubble, new government buildings and stronger building codes have been implemented, and more than 90 percent of people living in the tent cities have left.

“The government has given assistance to those people to move to their previous neighborhood by helping them renovate their homes, and has built new apartment compounds for the others. The Champs-de-Mars area and other places of the Port-au-Prince and Léogâne are now free of those camps,” said Beauvoir. “The current government has made a lot of efforts.”

Elected in 2011, President Michel Martelly has overseen the bulk of the country’s recovery, though in recent months violent protests against his government and a call for long-delayed legislative and local elections have undermined his role.

The country’s parliament was set to dissolve and the president to rule by decree on Jan. 12, the same day as the fifth anniversary of the earthquake, if a deal isn’t reached.

Beauvoir recently served on an 11-member commission of former officials and religious leaders to help resolve the political stalemate that stalled elections since 2011.

There has always been political instability in Haiti, said Duracin, during an interview with Episcopal News Service in Haiti in mid-December, noting that many young people feel abandoned by the government.

Beauvoir acknowledged the instability and the concerns of young people in his statement.

“At the fifth anniversary of the earthquake, our biggest challenge is to rebuild the Haitian person in mind, spirit, and body. We need to develop a new Haitian man, a new Haitian woman, who will provide the new leadership that is required to take Haiti into the 21st century,” he said. 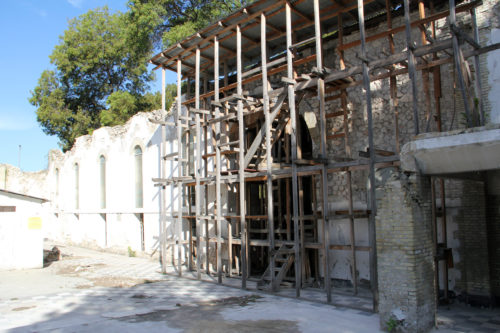 An exterior wall of Holy Trinity Cathedral still remains and will be incorporated into the new cathedral. Photo: Lynette Wilson/ENS

The presiding bishop made a historic visit to northern Haiti in mid-December and preached at Holy Spirit Parish in Cap-Haitien, visited the parish’s school and the nearby Holy Spirit trade school, before heading south to spend a day in the capital. It was her sixth trip to Haiti, the first being in 2008.

In the earthquake’s aftermath, the Domestic and Foreign Missionary Society began raising money to rebuild the cathedral and its ministry.

The Domestic and Foreign Missionary Society is the legal and canonical name under which The Episcopal Church is incorporated, conducts business, and carries out mission.

Architectural plans have been approved and the cathedral will be constructed in three phases, said Elizabeth Lowell, director of the Domestic and Foreign Missionary Society’s Office of Development, adding that $2.5 million has so far been raised to fund construction. The total project is estimated between $21 and $25 million.

In addition, many of the small, rural schools outside the capital have been rebuilt, many with the help of the 600 Episcopal parishes and entities in the United States that have formed Haitian partnerships, said Lowell.

Still, she said, “in terms of what we’ve done the needs are so great and so expansive,” citing an Episcopal hospital that remains damaged in Léogâne.

Since 2012, the Domestic and Foreign Missionary Society has led seven pilgrimages to Haiti in an effort to connect Episcopalians in the United States with the rebuilding of the church and the country, and working with local partners to determine their needs.

Eighty percent of Haitians live in poverty; the earthquake laid bare the everyday struggles of life. The tent cities, which provided homes to people displaced by the earthquake, also attracted Haitians from the countryside seeking relief from international aid organizations and foreign governments engaged in relief and recovery efforts.

Eventually, non-governmental organizations and donors realized they needed to invest in rural and urban development outside the capital to encourage Haitians to return home. That work can be seen both at St. Barnabas Center for Agriculture near Cap-Haitien, where the diocese is training 54 students in agriculture, and at the technical school where it offers courses in mechanics, plumbing and electricity.

With more than 300 acres of fertile land in a country where food insecurity is common, St. Barnabas has attracted support from Episcopal partners, other organizations, the Haitian government and universities.