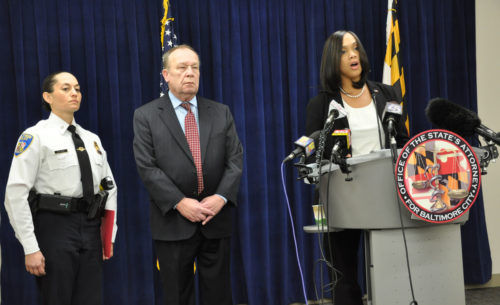 [Episcopal News Service – Baltimore, Maryland] Episcopal Diocese of Maryland Bishop Suffragan Heather Cook surrendered to Baltimore law enforcement hours after she was charged Jan. 9 with eight offenses for allegedly causing a fatal car accident in which she temporarily left the scene after striking and killing a bicyclist.

Cook turned herself in to police mid-Friday afternoon and was being processed at Central Booking, police told The Baltimore Sun. A court commissioner was expected to determine her bail in the evening, a judiciary spokeswoman said, the Sun reported. 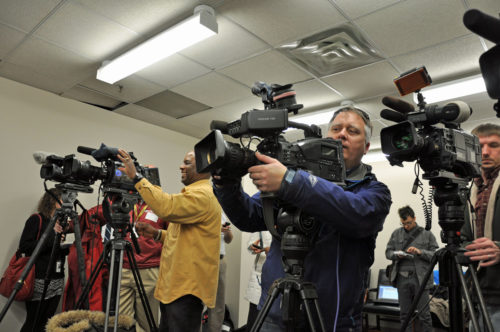 Mosby said a breathalyzer test administered to Cook after the accident showed the bishop had a blood alcohol content of .22 percent. The legal limit in Maryland is .08 percent.

Thomas Palermo, 41, the married father of two young children, was pronounced dead on the afternoon of Dec. 27 at a hospital near the accident scene. He died from head injuries suffered in the accident.

Mosby reminded those at the news conference that Cook is presumed innocent until and unless she is found guilty beyond a reasonable doubt.

When Mosby met with the Palermo family Jan. 8, she said she “assured them that we’re going to pursue justice.”

The state’s attorney outlined the accident, citing the statement of probable cause that was filed in court. She said both Palermo and Cook were traveling southbound on Roland Avenue with Palermo in the bike lane and Cook in the traffic lane. Cook, who was texting while driving at the time, veered off to the right and into the bike lane, striking Palermo from the rear. The collision caused Palermo to strike the hood and windshield of Cook’s 2001 Subaru, Mosby said. He was thrown to the right-hand side before coming to a final rest against the curb.

Cook left that residence shortly after her arrival there and returned to the scene. Mosby said that Cook then was taken from the scene to a police station by members of the Baltimore Police Department where she was given a breathalyzer test which resulted in the .22 reading.

Mosby said that the case will be presented to a grand jury scheduled to be impaneled on Jan. 12. The jury could drop some of the charges and/or add others.

Mosby, 34, was acting on her first full day as Baltimore City State’s Attorney, having been sworn into office the day before.

Just after Mosby concluded her news conference, Diocese of Maryland Bishop Eugene Sutton released a statement saying in part: “Please know that we are deeply heartbroken over this, and we cry for the Palermo family, our sister Heather and all in the community who are hurting.”

“Our Lord Jesus would be a healing presence in the midst of this tragic situation, and we are seeking ways to walk in his footsteps in the days and months ahead,” he said. “As we do so we are truly being the church, and we will always be guided by our core Christian values of personal accountability, compassion and respect for the rule of law.”

Neva Rae Fox, Episcopal Church public affairs officer, also issued a statement acknowledging the charges and saying “as this is a legal matter, we will not comment on the charges or the proceedings that will follow.”

“Presiding Bishop Katharine Jefferts Schori maintains a pastoral and canonical relationship with Bishop Cook,” Fox said. “As a result, Cook will not be permitted to exercise her ordained ministry in the foreseeable future.”

Cook became the diocese’s first female bishop when she was ordained and consecrated Sept. 6. Cook’s biography is here on the diocesan website.

The Dec. 27 fatal accident brought to light a 2010 traffic incident in which Cook was arrested for driving under the influence of alcohol and for marijuana possession. Cook pleaded guilty to drunken driving in that incident, and the prosecution of marijuana possession charge was dropped. A judge sentenced her on Oct. 25, 2010, to pay a $300 fine and supervised probation. Court records available online do not note the length or conditions of Cook’s probation.

A Dec. 30 statement on the diocesan website said that during the search process that resulted in Cook being elected suffragan in 2014 she had “fully disclosed” the 2010 arrest for which she received “probation before judgment” from the court. “After extensive discussion and discernment about the incident, and after further investigation, including extensive background check and psychological investigation, it was determined that this one mistake should not bar her for consideration as a leader,” the statement said.

The convention that elected Cook on May 2, 2014, however, was not told about the 2010 arrest, Sharon Tillman, the diocese’s director of communications, confirmed to ENS Jan. 9.

Previous ENS coverage of the accident is here.