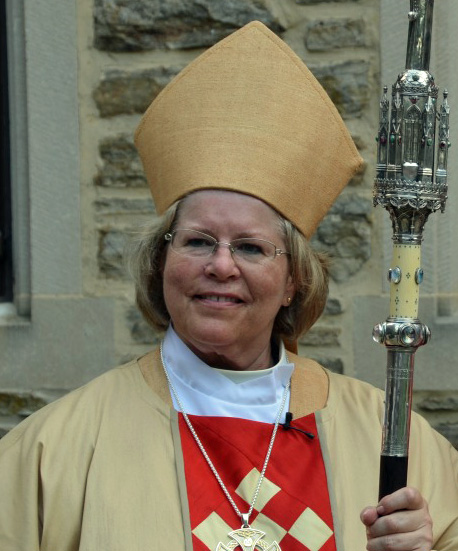 Diocese of Maryland Bishop Suffragan Heather Cook remains on administrative leave pending the outcome of an investigation into a fatal accident in which police say she was the driver. Photo: Richard Schori

[Episcopal News Service] Diocese of Maryland Bishop Suffragan Heather Cook remains on administrative leave and The Episcopal Church’s disciplinary processes have been put in motion after her involvement in a fatal car accident in which she temporarily left the scene after striking and killing a bicyclist.

The Dec. 27 accident in northern Baltimore that killed Thomas Palermo, 41, is still being investigated by local law enforcement and no charges have been filed.

“Currently we are following the disciplinary processes of the Church, and we are providing pastoral care,” Episcopal Church public affairs officer Neva Rae Fox said Jan. 6, speaking for Presiding Bishop Katharine Jefferts Schori. “We hold Bishop Cook, the Diocese of Maryland and the Palermo family in our prayers.”

She added that “as per the canons, details of the process remain confidential.”

Title IV of the Canons of The Episcopal Church governs ecclesiastical discipline of clergy members. Canon 17 of Title IV outlines the disciplinary process of bishops.

Meanwhile, the diocese has released a report on certain details concerning the day’s events and the investigation in the hours and days just after the accident. 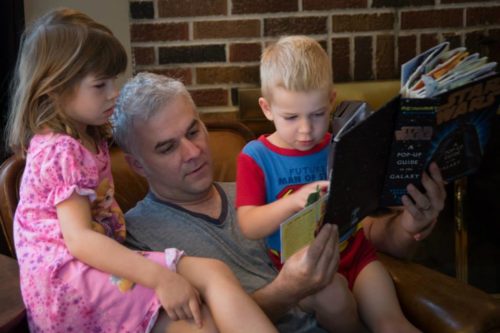 Tom Palermo, 41, was the father of Sadie, 6, and Sam, 4. He was a senior software engineer at Johns Hopkins Hospital who also made custom bike frames. Photo: Bikemore via Facebook page

Palermo, the married father of two young children, was pronounced dead at a hospital near the crash scene after the accident. Palermo died from head injuries suffered in the mid-afternoon accident, said Bruce Goldfarb, spokesman for the Maryland medical examiner’s office, in an interview with the Associated Press.

The diocese’s report of the events was released after numerous diocesan clergy met in closed session Jan. 6 to discuss the incident at the request of Maryland Bishop Eugene Sutton.

According to the report, Cook called the Rev. Scott Slater, Sutton’s canon to the ordinary, just before 3 p.m. Dec. 27, “telling him she thought she had hit a bicyclist and was in shock.” Slater arrived at the scene 10 minutes later to find police crime scene tape surrounding Cook’s car and her sitting in a patrol car. Slater spoke to officers about the call from Cook. He then called Sutton and diocesan chancellor Jeff Ayres and left the scene.

Baltimore police called Slater just before 5:30 p.m. to ask him to pick up Cook. He did so, bringing her to her apartment where he “focused his conversation pastorally on her, as a child of God,” praying with her before he left.

Two days later, on the evening of Dec. 29, Baltimore police asked Slater to come to the police station to make a recorded statement. He did so, the statement said, answering “every question as thoroughly and completely as he could recall, including details of his and Cook’s conversation during the car ride to her apartment.”

Slater provided no other details to clergy at the meeting “out of respect for the ongoing police investigation, for the Palermo family, and for Cook,” the statement said, adding that Slater could not discuss his and other staff members’ cooperation with the Title IV investigation due to its required confidentiality.

“Cook is now in good hands and receiving care that will hopefully help her on her journey forward,” the statement said.

Palermo was a senior software engineer at Johns Hopkins Hospital. He also made custom bike frames, according to news reports. 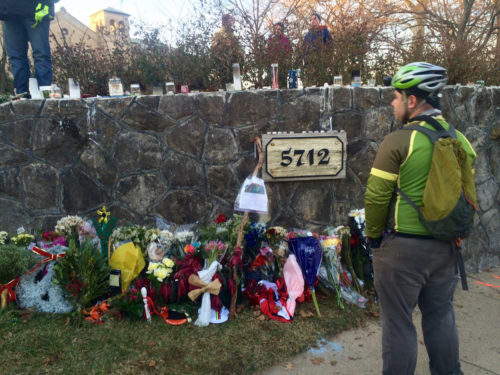 A memorial has been growing near the scene of the Dec. 27 accident in which bicyclist Tom Palermo died after being hit by a car driven by Diocese of Maryland Bishop Suffragan Heather Cook. Photo: Eileen M. Gilan via Bikemore Facebook page

“Together with the Diocese of Maryland, I express my deep sorrow over the death of the cyclist and offer my condolences to the victim’s family. Please pray for Mr. Palermo, his family and Bishop Cook during this most difficult time,” Sutton said in a Dec. 29 statement posted on the diocesan website.

Sutton confirmed in that statement that Cook was driving the car that hit Palermo and said the bishop suffragan left the scene of the accident but returned 20 minutes later “to take responsibility for her actions.” The bishop said that he had placed Cook, 58, on administrative leave “because the nature of the accident could result in criminal charges.” She is receiving pay and benefits in accordance with standard denominational practice, the Jan. 6 statement said.

Sutton said he has indefinitely postponed his planned sabbatical due to the accident and its aftermath.

Sharon Tillman, the diocese’s director of communications, told Episcopal News Service in a Jan. 2 telephone interview that the diocese was told by the police that it could be as much as two months before an accident report will be available.

David Irwin, an attorney representing Cook, told ENS Jan. 2 that his client is “distraught about the death of the cyclist, naturally. She is praying for him and his family.”

The accident brought to light a 2010 traffic incident in which Cook was arrested for driving under the influence of alcohol and for marijuana possession.

Cook was stopped Sept. 10, 2010, by a sheriff’s deputy in Caroline County in the Eastern Shore area of Maryland when she was observed driving 29 miles per hour on the shoulder of the road in a 50 miles-per-hour zone, according to law enforcement records. Her car had a shredded front tire.

The reports of the 2010 incident said that Cook registered .27 percent blood alcohol content. The legal limit in Maryland is .08 percent. The officer said two small bags of marijuana were found in the vehicle, along with drug paraphernalia, and a bottle of wine and a bottle of liquor.

Cook pleaded guilty to drunken driving in that incident, and the prosecution of marijuana possession charge was dropped. A judge sentenced her on Oct. 25, 2010, to pay a $300 fine and supervised probation. Court records available online do not note the length or conditions of Cook’s probation. A Dec. 30 statement on the diocesan website said that during the search process that resulted in Cook being elected suffragan in 2014 she had “fully disclosed” the 2010 arrest for which she received “probation before judgment” from the court.

“After extensive discussion and discernment about the incident, and after further investigation, including [an] extensive background check and psychological investigation, it was determined that this one mistake should not bar her for consideration as a leader,” the Dec. 30 statement said.

“One of the core values of the Christian faith is forgiveness,” the statement said. “We cannot preach forgiveness without practicing forgiveness and offering people opportunity for redemption.”

The search process’s background check and psychological investigation on Cook were “no more [and] no less than what any other nominee would have gone through,” Tillman told ENS.

Cook was elected May 2, 2014, and became the diocese’s first female bishop when she was ordained and consecrated Sept. 6. Cook’s biography is here on the diocesan website. 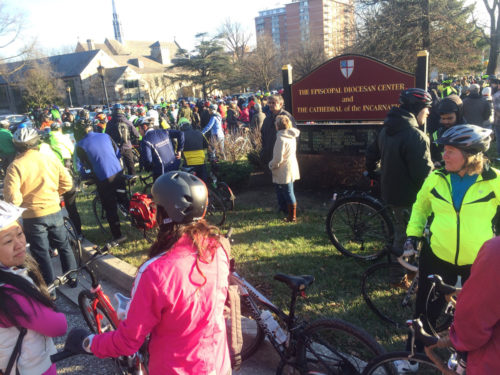 Bicyclists prepare to begin a Jan. 1 memorial ride to the site of the fatal accident in which cyclist Tom Palermo died. Photo: Eileen M. Gilan via Bikemore Facebook page

On Dec. 31 the diocese encouraged its clergy and lay members to participate in a New Year’s Day memorial bike ride in Palermo’s honor organized by two local bicycling groups. The ride began at 3:30 p.m. at Bishop Square Park adjacent to the Episcopal Cathedral of the Incarnation. After a moment of silence, the riders biked to the accident scene at 5700 Roland Avenue to place a white memorial bicycle, known as a “ghost bike,” in honor of Palermo.

Officials from Bikemore and Bike Maryland agreed that diocesan members could publicize and promote participation in the memorial ride, Tillman said.

“They invited our presence; they did not want us to stay away,” she said. “The cycling community in Maryland, especially in Baltimore, is very strong and they’re really in a lot of pain right now and we are grieving along with them. We wanted to be with them, but only if our presence wouldn’t make it worse.”

Diocesan officials opened the nearby diocesan center as well as the cathedral so that riders could spend time in silent reflection, get warm and use restrooms, Tillman added.

Palermo’s funeral Mass was celebrated Jan. 3 at Immaculate Conception Roman Catholic Church in Towson, Maryland. Sutton called on members of the diocese to join him in a moment of silent prayer and reflection at 10 a.m. that day as Palermo’s funeral began.