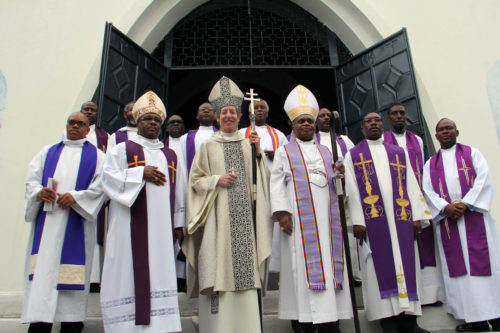 “It is a very significant visit for us,” said the Rt. Rev. Ogé Beauvoir, bishop suffragan of the Diocese of Haiti, during a Dec. 15 interview with Episcopal News Service at the diocesan office in Pétionville, a suburb of Port-au-Prince.

Each Sunday Episcopalians in northern Haiti pray for the presiding bishop, said Beauvoir, who has lived in Cap-Haitien since becoming suffragan bishop in 2012, but with the exception of very few, they’ve never met her. As worshipers were boarding buses following the Dec. 14 Eucharist, they told Beauvoir, “’please express our thanks and love to our presiding bishop, tell her that we love her,’” he said.

The presiding bishop visited Haiti Dec. 13-15, stopping first in the north where she preached at Holy Spirit Parish, visited the parish’s school and the nearby Holy Spirit trade school. It was her sixth trip to Haiti, the first being in 2008 before the devastating Jan. 12, 2010, earthquake that killed thousands of people and leveled Port-au-Prince, including the diocese’s Trinity Cathedral and its complex. 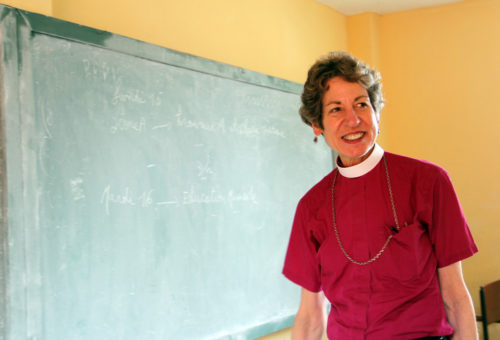 Jefferts Schori was accompanied by Alexander Baumgarten, director of the Domestic and Foreign Missionary Society’s Department of Public Engagement and Mission Communication, on the trip that began three days earlier with a visit to the Diocese of the Dominican Republic, where they learned about the government’s efforts to strip citizenship from Dominicans of Haitian descent.

“We’ve been in the Dominican Republic the last few days to learn more about the need for good news in the face of what the courts there have said about people of Haitian descent who live there,” said the presiding bishop during her Dec. 14 sermon. “The legal decisions seem to say that even if you were born there, if your parents or grandparents came from Haiti to work there, you have no right to have your birth recorded or your citizenship guaranteed. Many people have been caught between the two nations, effectively unclaimed by either one. Those without a recognized status cannot work, go to school, travel out of the country, or gain recognition for their own children.”

“The roots of this injustice are many – racism, colonial history, a lust for power, even official incompetence and neglect. They are the same sinful realities that have confronted human beings from the beginning – we don’t always choose to love our neighbors as ourselves.

“The good news is that all of us are claimed by the nation called the Reign of God. Together, we can decide to use our voices and actions to change the world’s bad news… ,” she said. 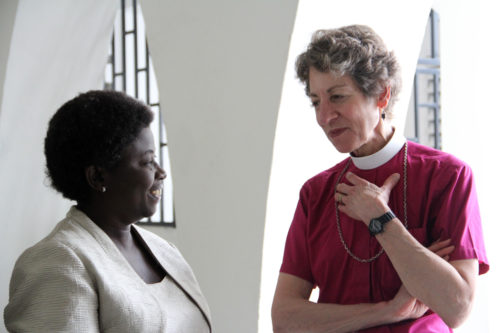 The presiding bishop’s trip to Haiti came at a time of violent protests against the government of President Michel Martelly. Protesters are demanding long-delayed legislative and local elections. On Nov. 28, Martelly appointed an 11-member commission of former officials and religious leaders, including Beauvoir, to help resolve the political stalemate that has since 2011 stalled the elections.

The commission recommended that Haitian Prime Minister Laurent Lamothe resign, which he did on Dec. 14.

“It is part of our ministry,” said Beauvoir of his appointment to the commission. “When the country is in trouble and the government asks us for help, it is our task to bring the people together.

“Being an Episcopalian means being tolerant, and there is a lack of tolerance in society today and that’s what we bring to the table.”

Martelly has accepted the recommendation of the commission and is willing to act on it, and the prime minister has just resigned, said Beauvoir Dec. 15.

“Those are signs of hope, and the next step is to call on the opposition to come and talk,” he said.

Violent protests continued on Dec. 16 when demonstrators took to the streets of the capital demanding the president’s resignation.

Unless elections are held before Jan. 12, 2015, the fifth anniversary of the earthquake, Haiti will be left without a functioning parliament until its late 2015 presidential elections.

“We have always had political instability but have seen some progress,” said Diocese of Haiti Bishop Jean Zaché Duracin. “The situation is not as it was when the earthquake happened, but we could do more for the Haitian people. Many young people feel they have been abandoned [by the government] regarding education, health care, the financial situation is not good, unemployment is high. I think we have a lot to do.”

The Episcopal Church is well respected in Haiti and has played a large role in the country’s post-earthquake redevelopment; however, the country remains the poorest in the western hemisphere. 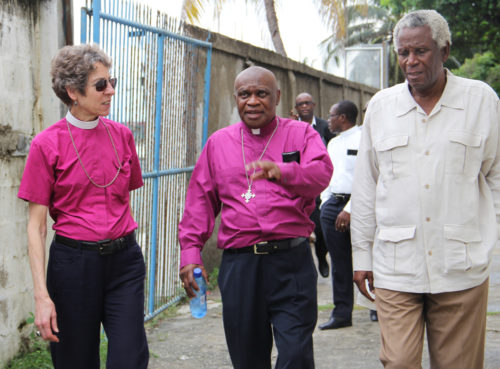 Haiti has an 80 percent unemployment rate and millions of people live in extreme poverty; following the earthquake Haitians from throughout the country flocked to the devastated Port-au-Prince to receive international aid. Eventually, NGOs and donors realized they needed to invest in rural and urban development outside the capital to encourage Haitians to return home. That work can be seen both at St. Barnabas Center for Agriculture, where the diocese is training 54 students in agriculture, and at the trade school where it offers courses in mechanics, plumbing and electricity.

The diocese has a partnership with the Florida-based Food for the Poor in the northern region through which it is helping young people get life skills, said Beauvoir, pointing to the 420 students studying at the trade school.

“With the partnership with Food for the Poor, we pay for 250 of them,” he said. “We are trying to empower young folks. Also we are working with the people in the villages on organizing their lives together… and with women on social justice issues.”

The Diocese of Haiti is the largest diocese of the Episcopal Church and covers the entire 10.7 thousand square mile country; 46 clergy serve more than 200 churches, 254 schools, two hospitals and 13 clinics.

The diocese plans to introduce a resolution at the 2015 General Convention in Salt Lake City, Utah, that if passed would establish a second diocese in the north.

Establishing a second diocese in Haiti would allow the leadership to hone and intensify the growth underway in that region by providing more local attention and support, and the ability to respond to opportunities and challenges more quickly, Jefferts Schori told ENS after the visit.

“For example, the Northern Region Assembly held just before we arrived is an example of a proto-diocesan leadership council that can strategize for that part of the diocese,” she said. “Sustainability comes from the ability to match missional resources with missional needs, and it always has to be context-specific.”