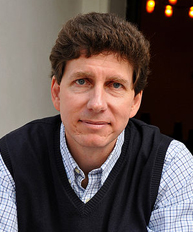 But he hesitates to consider it a religious-themed movie because “I’m somewhat of a skeptic looking at religious films, as in the Middle East and the culture I grew up in, you don’t really separate one from the other. It’s all interwoven, a single thread,” said Chandler, former rector of St. John’s Episcopal Church in Cairo, Egypt.

For example, he said, if the new movie “Exodus: Gods and Kings” is shown in the Middle East, “no one thinks that it’s a religious film. It’s simply a story related to the Middle East, whether it’s true or not.”

Chandler is the founder and curator of the Caravan interfaith arts exhibition, a nonprofit movement founded in Cairo that since March 2014 has been based in Chicago.

Washington National Cathedral and the Cathedral of St. John the Divine in New York recently showcased the Caravan exhibition, “AMEN: A Prayer for the World.” Chandler co-curated the show with Egyptian artist Reda Abdel Rahman. It included a showing of 30 Egyptian artists with Muslim and Christian backgrounds and 18 Western artists with Jewish and Christian backgrounds.

Similarly, “Ports of Call,” expected to be released in the spring of 2016, aims to deepen understanding between faiths. It is based on the 1996 novel by Lebanese French author and Académie Française member Amin Maalouf and was nominated for a Nobel Prize for Literature.

The story of two ill-fated lovers who meet in Paris during World War II and who are ultimately torn apart by the 1948 Arab-Israeli war will be produced by Ron Senkowski (“Kahlil Gibran’s The Prophet,” “Decoding Annie Parker”) and Samira Kawas through their Dubai/L.A.-based Symply Entertainment. Chandler, who initially obtained the rights from Maalouf, is a co-producer.

“It’s quite a story,” Chandler told ENS recently from Chicago. “In some ways, the film is a microcosm of the Middle East but it also links to the West and it addresses East-West issues …  it’s got war, tragedy, love, conflict.”

“It involves the story of a Lebanese Muslim man of Turkish origin whose mother was Armenian Christian who falls in love during the French resistance in France while studying there, with a young Jewish woman,” so it involves all three Abrahamic faiths, Chandler said.

Being a film industry novice didn’t faze Chandler, who grew up in Senegal, the son of missionaries, and “always observed this tension, the divide that exists between the two faiths and cultures, especially between the cultures of the Middle East and the West.”

“My father was the pastor of the international church, with services in English and French, in Dakar, the capital city,” he recalled.

Drawn to The Episcopal Church while in college, he began to realize that the arts can “bridge creeds and cultures in the East and West” while serving as St. John’s rector in Cairo, he told ENS.

Danis Tanovic, who won the 2002 Foreign Language Oscar for “No Man’s Land,” as well as the Cannes 2001 screenplay prize for the film, is directing “Ports of Call.”

“The film is about impossible love,” said Senkowski, Symply Entertainment CEO, in an email to ENS about “Ports of Call.” “Love without boundaries. Can two people who are in love survive in a world that is filled with conflict and war dedicated toward destroying people who are of other faiths? Today’s world is filled with blindness toward others.

“Today it is neighborhood versus neighborhood, family against family, tribe against tribe. Lines on a map are dividing people as a result of arbitrary, or at least poorly conceived demarcations. These divisions are disrupting and in fact dominating generations of lives. Love thy neighbor is a notion that has been forgotten.”

The film hopes to “inspire people to look beyond faith as a defining characteristic upon which to base relationships,” he said.

Chandler said the film intends to encourage understanding and respect for one another and to help “overcome the all-too traditional prejudices toward the other” as well as addressing the critical issues of peace-building … “in some ways like an ‘English Patient,’ but with a deeper kind of purpose within it.”