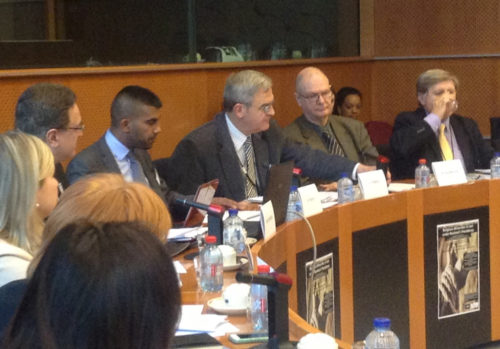 The Rev. Mark Barwick (second from right) presents findings of a report on human rights violations in Iran to the European Parliament. Photo courtesy of HRWF

[Episcopal News Service] Fulfilling God’s vision of a renewed creation “that respects the dignity and beauty of every individual person on this planet” may be a formidable goal, but the Rev. Mark Barwick lives for that dream of a reconciled world.

Based in Brussels, Belgium, the Episcopal priest says that his work as a policy adviser with Human Rights Without Frontiers (HRWF), a nongovernmental, nonreligious organization, “is a part of that recreation and renewal of human societies.”

As associate priest of All Saints in Waterloo, and vicar of a small congregation at Christ Church in Charleroi – parishes in Belgium that are part of the Convocation of Episcopal Churches in Europe – Barwick has always found the need for his faith to be expressed through justice, peace and human dignity for all people. “A faith that is not linked to these values is uninteresting to me,” he said. “St. James said that faith without works is dead. Faith without true commitment to human dignity is not credible.”

Founded in 1989, HRWF works closely with many of the European institutions, particularly the European Parliament, in organizing strategic conferences and training workshops, researching and sharing information, and working hands-on with policymakers on a myriad of human rights issues.

The European Union of 28 states “is primarily a project in peacemaking, to create a more humane community of nations based on justice, human dignity and respect of fundamental human rights,” said Barwick, 58, while sipping coffee next to Brussels’ Schuman metro station in the shadow of the European Parliament.

“The EU as we know it today was born out of war. The 20th century was the scene of terrible brutality,” he said, “Belgium was a blood field.”

Following World War II, a convergence of European nations united to say no more to the bloodshed “and to explore ways to create political and economic integration that makes sense in our diversity that can make a more peaceful and prosperous community,” said Barwick.

This was the vision of Robert Schuman, the mid-20th century French politician for which the Schuman metro station was named, and it is very much alive today with human rights placed as a top priority by the European Union, which turns to HRWF – an active member of the Human Rights and Democracy Network – as a key resource for advice and guidance as it prepares for political debates and sets policy.

Freedom of religion and belief, the promotion of democracy and the rule of law are all major priorities for HRWF, and many of Europe’s decision-makers find the organization’s work in these areas invaluable, said Barwick.

For instance, recently HRWF worked with others to provide training on freedom of religion or belief for the foreign ministry’s diplomatic staff. “It’s about freedom of thought really,” said Barwick, citing Article 18 of the International Covenant on Civil and Political Rights, adopted by the United Nations General Assembly in 1966, as being the foundation for his organization’s work. “This is one of our marching orders. It’s very clear that everyone should have dignity and freedom to think and believe as they wish.

“Freedom of conscience includes the belief system. That is the first freedom out of which all others come – freedom of association, expression, etc.,” he added. “Human dignity is a gift from God.”

But in many countries people are not free to change their religion, with some imposing death sentences. This reality makes Barwick’s work even more critical, especially amid misunderstandings about faith and culture, and with increased extremism and religious persecution permeating many Middle Eastern, Asian and African countries.

A major focus for HRWF this year has been on people who are imprisoned or subject to a death sentence because of their faith, in countries such as Iran, Pakistan, Saudi Arabia and Sudan. The organization compiled a prisoners’ list naming hundreds of people who are behind bars because of laws forbidding or restricting their basic rights to freedom of religion or belief.

As a trainer in diversity issues, Barwick is committed to raising awareness and understanding of these human rights violations, and hopefully being a catalyst for advocacy and change.

Barwick moved to Brussels 12 years ago to take a post with the Roman Catholic peace movement Pax Christi, focusing primarily on African issues and conflict zones, and he has been working with HRWF for just over two years. He previously served as the regional director of Bread for the World, based in Washington, D.C.

In Brussels circles, Barwick is recognized for having expertise in the intersection between religion and lesbian, gay, bisexual and transgender people, and he works to combat the polarization that exists between faith and sexuality.

“In political spheres, you often see the humanists and secularists on one side, and then cowering in the corner the small number of religious people, and I am trying to reconcile these groups,” he said. “But there are welcoming faith communities. We are working with this movable middle and also those with religious convictions and exclusionary attitudes to LGBT people. We are trying to change that … trying to find bridge values that apply to everyone.”

In the past year, Barwick also has served as a consultant and trainer for the Budapest Centre for the International Prevention of Genocide and Mass Atrocities, work that focuses on violence prevention and alleviating tensions in Hungary, Poland, the Czech Republic and Slovakia.

Reflecting on his work with Pax Christi, Barwick said that a lot of his time in Africa involved stimulating dialogue among belligerent groups after war. In Liberia, for example, he worked through a local NGO to rebuild relations between the Lorma ethnic group, which included Christian traditionalists, and the Mandingo, which was predominantly Muslim. “Over time the groups would talk about how we could change this situation – not addressing problems in the past, but how can we mold a better future.”

Looking ahead, as an active member of the European Platform on Religious Intolerance and Discrimination, HRWF plans in 2015 to help sponsor a conference on freedom of religion or belief and democracy in the workplace, an issue that has been widely publicized as some European companies have moved to ban Muslim women wearing the hijab while at work.

“It’s not only about there being a visible expression of faith in the workplace, but it also touches on the environment of economic uncertainty,” he said. “We feel that [our work] will have some traction in the parliament. So we try to offer conferences that people will find useful to their own legislative agenda.”

Barwick said that he often wonders if the day-to-day work is making a difference, “but then things happen – a decision made, laws changing, our reports being quoted. The legal framework at the EU level is ever evolving, and we are a part of that. The EU institutions are mandated to listen to civil society, so we have a real opportunity to shape public policy that makes a humane world for us all.”