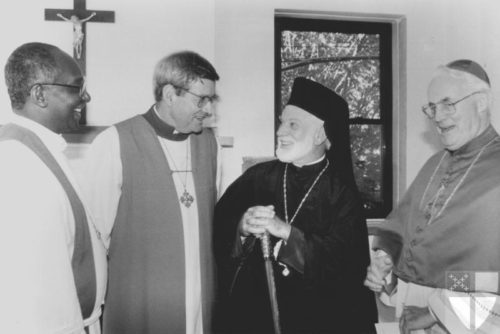 In this 1994 photo, Diocese of Chicago Bishop Suffragan William Wiedrich, second from left, joins other Chicago-area faith leaders in an ecumenical service for those living with HIV/AIDS. Photo: Jack Spratt/Episcopal News Service

[Episcopal News Service] Bishop William Wiedrich, suffragan bishop of the Episcopal Diocese of Chicago from 1991 to 1997, died on Nov. 26 at an assisted living facility in Muskegon, Michigan.

He was 83 and had suffered from Alzheimer’s disease for some time, according to an announcement from Diocese of Chicago Bishop Jeffrey Lee.

Wiedrich was born in 1931 in Stambaugh, Michigan, and in 1956 received his Master of Divinity degree from Bexley Hall Seminary. He was ordained a deacon in 1956 and a priest in 1957 by Diocese of Northern Michigan Bishop Herman R. Page Jr.

Wiedrich spent the first 25 years of his ministry in Northern Michigan, serving congregations in Newberry, Munising, Houghton and Sault Ste. Marie. In 1981, he became rector of the historic Grace Episcopal Church across from the state capitol in Madison, Wisconsin.

In October 1990, at age 59, he was elected bishop suffragan in Chicago, and he was ordained and consecrated on Feb. 23, 1991. When he was elected, then-Bishop of Chicago Frank Griswold (who later was elected the 25th presiding bishop of The Episcopal Church) said Wiedrich “brings with him a wealth of experience, particularly in small congregations…. He has a pastor’s heart and a wonderful way of weaving story into the proclaiming of the Gospel.”

Wiedrich is survived by his wife, Tress, and their sons, Tom and Bill. Funeral services are pending.