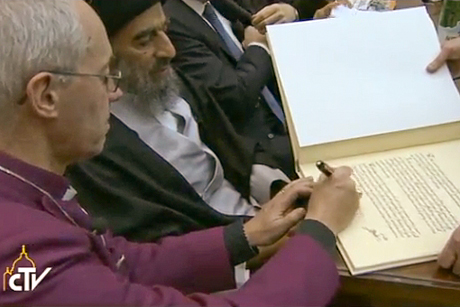 The ground-breaking Global Freedom Network – which launched with backing from Archbishop Justin and Pope Francis in March 2014 [link] – brings together faith leaders in a commitment to eradicate modern slavery by 2020 throughout our world and for all time.

The Joint Declaration of Religious Leaders against Modern Slavery signed today underlines that modern slavery – in terms of human trafficking, forced labour and prostitution, organ trafficking, and any relationship that fails to respect the fundamental conviction that all people are equal and have the same freedom and dignity – is a crime against humanity, and must be recognised as such by everyone and by all nations.

The faith leaders affirmed their common commitment to inspiring spiritual and practical action by all faiths and people of goodwill everywhere to eradicate modern slavery.

In an address before the signing, Archbishop Justin described today’s declaration as “a profoundly significant moment”.

The leaders had gathered to “affirm a deep shared commitment for the liberation of those humiliated, abused and enslaved by their fellow-human beings,” he said.

“There are already close and trusting relationships between us as faith leaders. Our task now is to make these relationships work effectively for the well-being of all people.”

Archbishop Justin said faith leaders can make sure that every worshiping community knows about modern slavery and is ready to work to prevent and end such abuses.

“As we make this solemn commitment today, my prayer is that we shall by God’s grace play a key role in ending the inhuman practices of modern slavery – practices that disfigure our world and obscure the image of God in men, women and children. We have the will, we have the common purpose, this can be done; may God bless our action together,” he said.

We, the undersigned, are gathered here today for a historic initiative to inspire spiritual and practical action by all global faiths and people of good will everywhere to eradicate modern slavery across the world by 2020 and for all time.

In the eyes of God*, each human being is a free person, whether girl, boy, woman or man, and is destined to exist for the good of all in equality and fraternity. Modern slavery, in terms of human trafficking, forced labour and prostitution, organ trafficking, and any relationship that fails to respect the fundamental conviction that all people are equal and have the same freedom and dignity, is a crime against humanity.

We pledge ourselves here today to do all in our power, within our faith communities and beyond, to work together for the freedom of all those who are enslaved and trafficked so that their future may be restored. Today we have the opportunity, awareness, wisdom, innovation and technology to achieve this human and moral imperative.

*The Grand Imam of Al Azhar uses the word “religions”.