[Episcopal News Service – Charleston, South Carolina] The three newest mission congregations of The Episcopal Church in South Carolina worship in two United Methodist churches and a former martial arts studio next to a barbecue joint and a bar.

The three newest missions’ worship arrangements are not unusual for such fledgling congregations in the Low Country of South Carolina. For instance, the Episcopal Church on Edisto began meeting in a barbecue restaurant and now shares space with New First Missionary Baptist Church, an African-American Baptist church that worships in a newer building next door. 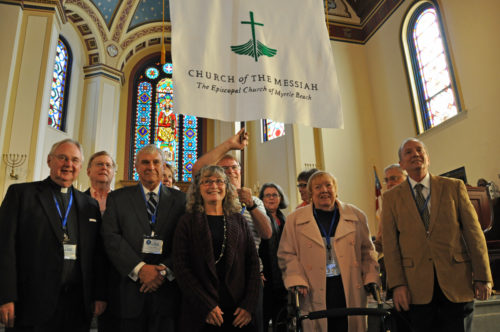 St. Catherine’s Episcopal Church in Florence meets in the Back Swamp Schoolhouse, a 1921 wood-frame building with neither heat nor air conditioning.

Episcopal Church of the Good Shepherd in Summerville shares space with an African-American congregation, Wesley United Methodist Church, and holds Sunday school in the public library around the corner.

“Unlikely groups have been the most welcoming of us,” South Carolina Bishop Provisional Charles vonRosenberg told ENS.

Beginning November 2012, and in some cases earlier, many Episcopalians felt forced to leave their parish homes in a dispute led by then-diocesan Bishop Mark Lawrence over policy decisions made by the wider Episcopal Church. Lawrence was deemed to have renounced his Episcopal orders. 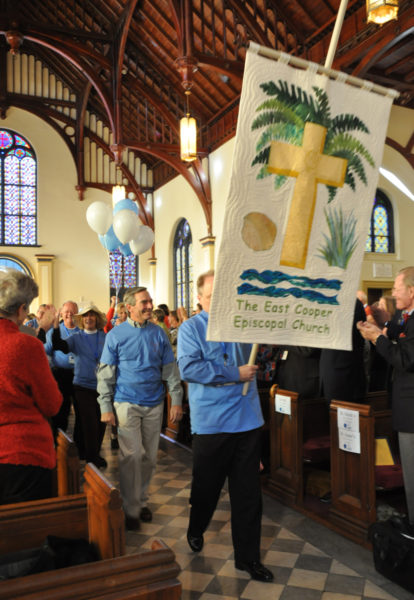 “The Exodus event seems to relate to our experiences in various ways,” vonRosenberg said during his address to the church’s 224th annual convention Nov. 15. “For instance, I have heard from many of you about the sense and reality of oppression in this part of the church, in previous times. Then, a kind of separation and exodus took place. And now, people of God, we find ourselves traveling through the wilderness.”

Theirs is not a barren wilderness, however, vonRosenberg said during an ENS interview prior to the convention. In addition to numerical growth, there has been spiritual growth.

“There’s meaning here, which is deep and profound. It has to do with building community, knowing what is important, claiming that and wanting to go forward with that conviction,” he said. “We’re not looking back because the future is bright and what’s in the past is something that we don’t need or want to relive.”

Or as Andrea McKellar, St. Francis’ senior warden, put it: “It’s been very joyful. It’s a truly resurrection experience that we went from what seemed in the first days to be the worst situation in the world to now I wouldn’t change anything about it.”

These eight new worshiping communities are pilgrims, journeying towards a destination they may not yet see clearly but knowing they are committed to being Episcopalians, the bishop and others said.

“There’s a holy patience” among those pilgrims, said the Ven. Calhoun Walpole, who serves as archdeacon of The Episcopal Church in South Carolina.

“People know that they won’t see the fruits. There’s a deep sense that I see; a deep understanding that the harvest is not ours; that it can never be ours, it’s the Lord’s; that we are here laboring in these fields right now, laboring for future generations,” said Walpole, who is also vicar of Grace Episcopal Church in Charleston. “You boil that all down and it’s the church being the church. It’s what the church has done in every time in every generation in every place. We just have the gift of experiencing a heightened sense of that reality.”

Those people who are experiencing that reality have made the sacrifice of leaving church buildings that held parts of their families’ histories and in some cases family and friends who also carried that history, vonRosenberg and Walpole said. And Walpole suggested that other sacrifices are being made as well, acknowledging that some Episcopalians have stayed in the parishes that have followed Lawrence’s lead.

“I think the story that is not told for obvious reasons is the story of those people who have made the decision to stay in their respective parishes that broke away,” Walpole explained. “I believe those numbers are large and I believe those people, while they may not even use the language of ‘call’ or even ‘sacrifice,’ knowingly or unknowingly are continuing to bear witness quietly to the presence of The Episcopal Church in those parishes.” 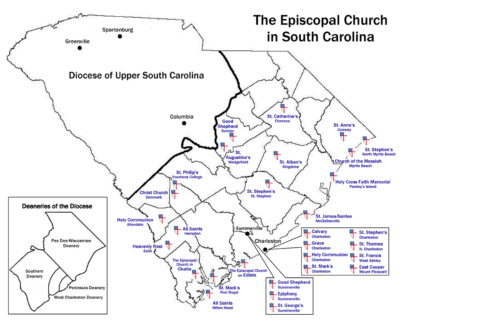 In the midst of The Episcopal Church’s reorganization in South Carolina, its members were called during the Nov. 14-15 convention to look outward, as well as inward. The convention’s theme was “Christ to the world we bring.” Its leaders wanted to start to change the church’s focus from survival to mission, while reestablishing a sense of Episcopal and Anglican identity and accountability. VonRosenberg said the leadership wants to encourage all of its congregations, and especially its start-ups, “to be recognized in the larger community for a purpose which involves the mission of Jesus.”

And former Southern Malawi Bishop James Tengatenga, who chairs the Anglican Consultative Council, was the preacher during the opening Eucharist. Tengatenga’s presence was meant to show the church and the wider community that, in vonRosenberg’s words during his address, “The Episcopal Church is the only recognized member of the Anglican Communion in this country.”

Legal work remains to be done. There are court actions focused on which group should have legal control of the Diocese of South Carolina. And while vonRosenberg and other leaders do not want to focus the Episcopalians on the court actions, those legal cases do make a claim on the organization’s attention and finances. And the bishop says they represent important work for the Episcopalians’ reorganization and their future “in this part of South Carolina.” Details about the court actions are here.

Still, vonRosenberg told ENS, Episcopalians in South Carolina are telling him that “we’re not looking back because the future is bright and what’s in the past is something that we don’t need or want to relive.”

Eve Pinckey, a founding member of the Episcopal Church in Okatie who now serves on its vestry, describes it this way: “We’re going to grow, grow, grow and love, love, love one another, just as we always have. It’s going to be wonderful. I can’t wait.”