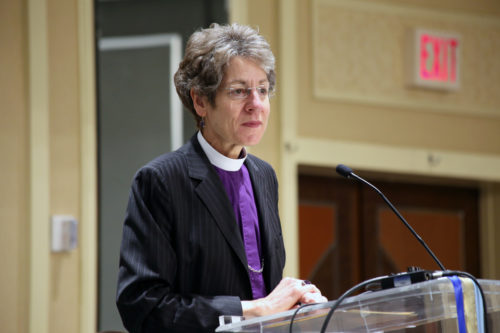 [Episcopal News Service] The charisms of Episcopal schools – a “generous comprehensiveness, patience with ambiguity, and a search for wisdom grounded in a deep and abiding belief in the goodness and creativity of the world” – make them particularly suited to forming leaders for an increasingly globalized and interconnected world, Presiding Bishop Katharine Jefferts Schori told a gathering Nov. 21 in Anaheim, California.

Some 570 teachers, heads of schools, bishops, parish rectors, administrators, chaplains and others from across the world gathered Nov. 20-22 to celebrate Episcopal education and the 50th anniversary of the National Association of Episcopal Schools (NAES).

“Episcopal education is about the big picture … overseeing, climbing up the hill in a strategic sense to see the whole landscape, and not only the immediate and very local context,” the presiding bishop said.

“It is about comprehension and inclusiveness; it’s an orientation toward the whole body rather than only one part. That fundamental given is why you gather students from so many different faith traditions and none, why you look for students from varied social locations, why Episcopal schools so often draw international students, why they increasingly seek to be more diverse than the communities in which they’re set.”

She challenged the group to consider a name that reflects its global character. School representatives from Haiti, Australia, and Canada were also in attendance.

NAES encompasses more than 1,000 schools in the United States and other countries, according to the Rev. Dan Heischman, executive director.

“This is one of the most important and valued mission fields of the church, as far as I’m concerned,” he said. “It’s about planting seeds. In terms of potential, the church frets a great deal about what it can do to reach the unchurched or people out there who might be interested in the Episcopal Church. Only about 20 percent of students who go to Episcopal schools are Episcopalian, so we have a tremendous opportunity of reaching people … of having a real impact in their lives in a variety of ways.”

Schools range in size from very small, such as the seven-student St. Timothy’s School in Compton, California, to the largest, Iolani, with more than 2,000 students in Honolulu, he said. Most tend to focus on preschool and early childhood development.

In addition to gathering educators for collaboration and networking, the conference “is casting a vision for the next 50 years,” Heischman said. “It’s an opportunity for Episcopal schools throughout the church to gather, to celebrate the wonderful things schools do and the impact they have. Many of our schools are isolated from one another.” 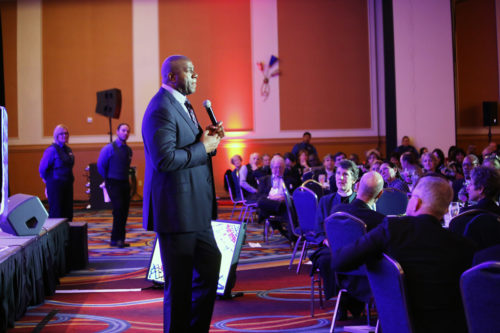 Johnson, who now is part owner of the Los Angeles Dodgers baseball team, the Los Angeles Sparks women’s national basketball team, and the Los Angeles Football Club, a professional soccer team, described the importance of sending his children – and now a grandchild – to an Episcopal school.

“I love chapel on Fridays, but also each and every day they’re getting a quality education that didn’t change who they are as E.J. and Elisa. It allowed them to be themselves and have a little cool factor to them … because that’s important.”

He also described the importance of education in preparing young people to be leaders, including his own humble beginnings in urban Lansing, Michigan, where he and nine siblings lived in a three-room house.

A teacher asked him for help during a period of racial tension, and Johnson, 55, told the gathering, “that day God made me a leader,” a tradition he has since continued.

Workshop themes and conversations also focused on some of the challenges schools face, including maintaining an identity as an Episcopal school in the midst of changing demographics, technology, and an increasingly secular culture.

Keynote speaker psychologist Madeline Levine, author of The Price of Privilege: How Parental Pressure and Material Advantage Are Creating a Generation of Disconnected and Unhappy Kids (HarperCollins, 2008), addressed how narrow definitions of success unnecessarily stress and marginalize creative students.

As a practicing psychologist her clients include kids who’ve “hit a wall because they’ve been so totally protected from failure, challenge, disappointment.”

Citing a parent who told her she couldn’t stand to see her child unhappy, Levine said, “If you can’t stand to see your child unhappy, you’re in the wrong business … because it’s a reality of life. How does a child go from having a favorite toy broken at five to having their heart broken by a first love at 15, to being fired at a first job at 25, to losing their own parents at 55… that’s just life and preparation for life includes not just college acceptances but a capacity to deal with challenge in ways that are healthy.”

She said a high school affiliated with Stanford University, California, where she works, “just had its seventh suicide in two years.” Contributing factors include a lack of support, a lack of meaning and a lack of wise adults mentoring them, she said.

The conference also featured more than 60 sessions on such wide-ranging topics as equity and justice; leadership and governance; the ministry of teaching; school life, culture and management; the study of religion; service and service-learning; and a self-study of Episcopal identity led by Heischman.

Daily worship and chapel featured young voices, including Sarah Engel, 17, a student at St. Margaret Episcopal School in San Juan Capistrano, who preached about hope for the future and the Old Testament story of Jonah (Jonah 1:17).

“Often in our lives we find ourselves fleeing our purpose – whether we mean to or not. Thank goodness that the moment we goofs realize we’ve got it wrong, the moment it hits us that we’re really in trouble, God sends us a big old fish to swallow us whole,” she told the gathering during the closing worship.

“In other words, God gives us a chance to think, all the while actively carrying us toward our second chance. If we’re like the people of Nineveh, we allow that second chance to transform us. We take the hint of hope, the whisper of salvation, in any bad fix we’re in, and latch onto it. We can take God’s clue and make it the center of our lives.

“As a Christian and as an overly dramatic, hormonal teenager, this hope is the most important thing to me, the greatest comfort in my life,” she said.

“I look into the eyes of my parents, I look to the stories I’ve been told since I was a toddler, I look up into the starry night sky, and I feel God telling me that this hope is unbreakable. I strive to carry this knowledge into my daily life. It’s a challenge, something I think is a lifelong journey. The point is, the hope we find in God is just a small clue, and it doesn’t narrow anything down. Yet it means everything. My prayer is that I keep this clue before me as I go through my days, and that I value it for the miracle it is.”