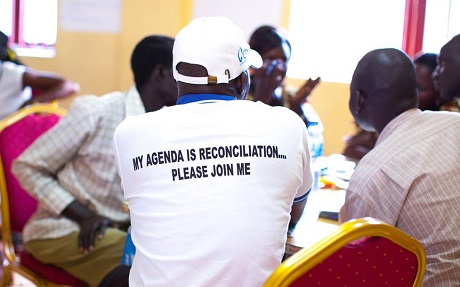 [Anglican Communion News Service] The Anglican Church in South Sudan has joined other stakeholders in the region to address the country’s continued conflicts by using a team of community members called “Peace Mobilisers.”

Peace Mobilisers are a group of about 80 well-trained community and faith-based practitioners from across South Sudan brought together to share knowledge and experiences on the various approaches to reconciliation and sent back into their communities to influence change.

At the end of a 30-day training period for this group last month, Archbishop Daniel Deng Bul of the Episcopal Church of Sudan and South Sudan told the media: “Peace in our country is paramount but building the unity of our people will be challenging and will need commitment and courage. But we are a big group, a battalion of peace and we can make peace in this county if we make a step together and we listen together,.”

Deng is the chairperson of the institution which organized the training, the South Sudan Committee for National Healing, Peace and Reconciliation. It is an independent peace and reconciliation body in South Sudan meant to “build bridges across political and social divides and promote healing and reconciling among all South Sudanese.”

Bishop Moses Deng Bol of South Sudan’s Diocese of Wau, who also attended the training, believes that this approach is effective and could be the solution to bringing lasting peace in the region.

He told ACNS in an interview: “We believe that this is a very effective approach in bringing peace to South Sudan because the mobilizers will be based in the communities and so they will be listening to their communities’ narratives, which is part of the healing process.”

He added, “Since they are based in the communities we hope that they will report anyone who does activities which may disturb peace or provoke conflict.”

The Peace Mobilisers represent different groups within the country such as the religious leaders, women’s associations, and youth unions among others. They were selected by the National Committee on Healing Peace and Reconciliation from the 10 states of South Sudan and Abyei Administrative Area and were brought to the town of Yei in the Central Equatorial State for one month to be trained as trainers of other Peace Mobilizers in their communities.

They are guided by a newly created and agreed on charter which indicates that members of this group are “peacemakers who do not take any sides and who see all people as equal in the face of God and who also endeavor to build trust and mutual understanding between divided communities, families and individuals.”