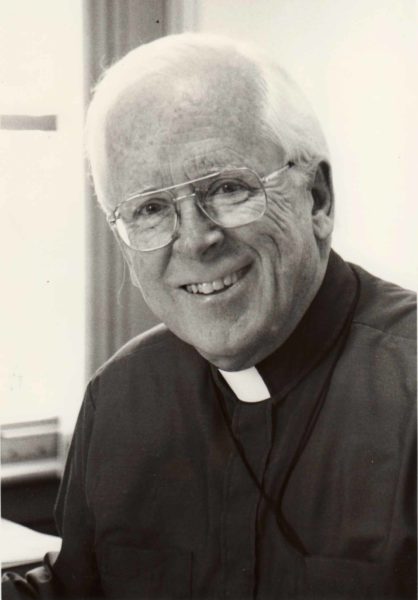 [Episcopal News Service] The Rt. Rev. James Michael Mark Dyer, bishop of the Episcopal Diocese of Bethlehem from 1982 to 1995, died Nov. 11 after battling multiple myeloma for several years. He was 84.

Bishop Provisional of Bethlehem Sean W. Rowe said that Dyer’s death “represents a significant loss to our diocese and to the church.

“Whether as an advisor to several archbishops of Canterbury, chief pastor to his diocese, mentor to countless priests and seminarians, or advocate for the poor, he represented the very essence of the servanthood that can be found at the heart of the episcopate,” Rowe said. “A master teacher, Bishop Mark drew on the joy and tragedy of the human condition, including his own, to bring to life the ministry of Jesus and the narrative of God’s work in the world in ways that made for real and lasting transformation. Those of us who had the privilege of sitting at his feet as students caught a glimpse of what it must have been like to sit at the feet of Jesus.”

The Very Rev. Ian S. Markham, dean and president of Virginia Theological Seminary (VTS), said: “The sense of loss is palpable. I was among many who found tears in my eyes as I learned the news … Mark Dyer was a giant of this seminary. He was a profound gift to the church and to this seminary.”

Dyer joined the VTS faculty in 1996 as professor of systematic theology and director of spiritual formation. He also served as professor of theology and mission. While at VTS he was a senior consultant for the Center for Anglican Communion Studies. After his retirement from VTS, Dyer maintained a presence within the VTS community as an adjunct professor until his death.

A widely respected leader in the worldwide Anglican Communion, Dyer was called upon frequently by Robert Runcie, George Carey and Rowan Williams for significant assignments during their tenures as archbishop of Canterbury.Under Runcie, Dyer was the sole representative of the bishops of the Episcopal Church on an international committee of 20 Anglican bishops who prepared theological position papers for the 1988 Lambeth Conference of bishops.Carey named Dyer to the 12-member steering committee that planned the 1998 Lambeth Conference. In 1998, he also named Dyer to the Eames Commission that attempted to quell controversy in the communion over the decision by some provinces to ordain women to the priesthood and the episcopacy.

In 2004, Williams named Dyer to the Lambeth Commission on Communion, which attempted to restore unity in the communion during the ongoing controversy over the place of lesbian, gay, bisexual and transgender Christians in the life of the church.

Dyer was also a committed and respected ecumenist, and his was an important voice in dialogues between the Episcopal Church and Lutheran and Orthodox churches in the United States in the 1980s and 1990s. He served as co-chair of the Anglican-Orthodox Theological Dialogue, which produced an agreed statement on the theology of the Church in 2006, published as The Church of the Triune God.

Archbishop Emeritus of Cape Town Desmond Tutu, remembered his friend Dyer, who he worked with on many issues in the Anglican Communion. “He had a gentle manner. His mouth was always ready to laugh. And he was an affirming presence in every situation in which I encountered him,” said Tutu.

Born June 7, 1930 in Manchester, New Hampshire, Dyer served in the U.S. Navy during the Korean War before studying contemporary philosophy at the Catholic University of Louvain in Belgium. He went on to earn his bachelor’s degree in theology magna cum laude from New Hampshire’s St. Anselm College in 1959.The following year, he was professed a monk in the Order of St. Benedict at St. Anselm Abbey, on the college’s campus. He was ordained priest of the abbey in 1963. He earned a master’s in theology and licentiate in sacred theology at the University of Ottawa, Canada, in 1965, while teaching at St. Anselm seminary. He also taught theology at Queen of Peace Mission Seminary in New Hampshire and as an adjunct professor at Gordon Conwell Theological Seminary in Massachusetts.

He entered the Anglican Church of Canada in 1969 and was received as a priest in the Episcopal Church in the Diocese of Massachusetts in 1971. He served the Massachusetts diocese as missioner to the clergy; priest in charge of Trinity Church, Bridgewater; and rector of Christ Church, Hamilton and Wenham, before being ordained bishop of the Diocese of Bethlehem in 1982.

In her 2008 book, “The Great Emergence,” Phyllis Tickle revised for a wide readership Dyer’s insight that the church’s history can be thought of as a series of “ecclesiastical yard sales.”

While bishop of Bethlehem in the early 1990s, Dyer wrote: “Christianity has had five significant yard sales. Each one has had to do with the church’s struggle to resist the temptation to domesticate God’s vision, to settle for change when God seeks transformation. The sixth is now. It’s something that seems to happen every three or four hundred years. In Christ through the power of the Holy Spirit, God empowers the church to discover its roots and its center, and transform itself in new, exciting and wonderful ways. Jesus announced the first yard sale. Then Benedict, in the sixth century. Then the Franciscan Spring in the thirteenth century. Then Martin Luther and the reformers in the sixteenth century, the only yard sale led by an ordained person. It’s time once again for a massive yard sale, a transformation led by lay people. Our 400 years are up.”Dyer is predeceased by his son Matthew and survived by his children John and Jennifer Dyer; his stepchildren, Robyn and Amanda Gearey; two grandchildren, Sam and Ava Wandler; and his spouse, Amelia J. Gearey Dyer, Ph.D., who serves VTS as the James Maxwell Professor of Christian Education and Pastoral Theology, and director of the Ministry Resident Program. He is also survived by a sister, Patricia Cashin.

Dyer’s first wife, the Rev. Marie Elizabeth Dyer, died in 1999. She was an Episcopal priest and they were married 29 years.