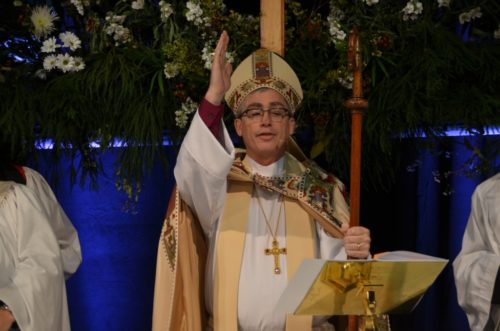 Robert S. Skirving offers a blessing following his ordination as the 8th bishop of the Diocese of East Carolina. Photo: Richard Schori 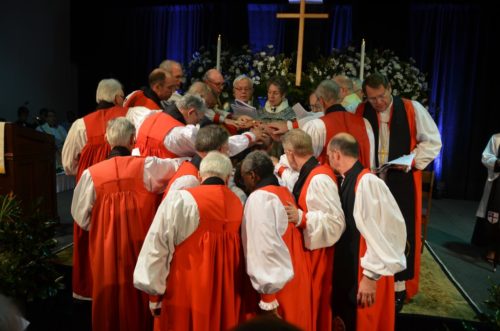 Several bishops lay their hands on Robert Skirving as he consecrated as the 8th bishop of the Diocese of East Carolina. Photo: Richard Schori

Skirving says he hopes to strengthen the ties between the Episcopal Church and the Moravian Church in Eastern North Carolina. The two traditions are in full communion with each other. The Rt. Rev. Michael Curry (North Carolina) preached, telling the 1,200 worshipers that God’s mission for humanity is to tell people how loved they are.

The ordination and consecration took place at the Rock Springs Center. Clergy of the diocese had the opportunity to meet with the presiding bishop during a luncheon on Friday. She facilitated conversation about effective ministries throughout the church, including the Farmworker Ministry, a joint ministry with the dioceses of East Carolina and North Carolina. 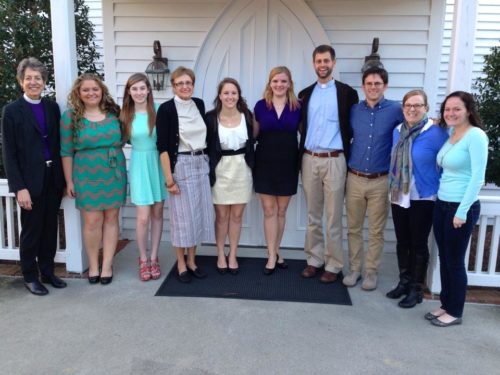 Later in the afternoon, students and campus ministers from Episcopal Lutheran Campus Ministries at East Carolina University, Episcopal Lutheran Ministries at UNC-Pembroke, and Episcopal Campus Ministries at UNC-Wilmington had the opportunity to gather for coffee and conversation with the presiding bishop at St. Timothy’s, Greenville. The conversation included LGBT inclusion and each campus’ outreach efforts: ELCM at ECU sponsoring a partner program with the Muslim Student group, ELM at UNCP working with a Native American Literacy Project in their local Community, and ECM at UNCW working at the Farmworker Festival earlier in the fall. The students were deeply engaged by the presiding bishop, and she encouraged them to continue in their strong work of reaching out.

There was no day of rest for the new bishop. He preached and presided at three services at Christ Church, New Bern, on Sunday, Nov. 9. He performed three baptisms, 12 confirmations, four receptions, and seven reaffirmations.

Skirving was elected bishop on May 17 in a special convention. He was serving as rector of St. John’s Episcopal Church in Midland, Michigan, when he was elected. Prior to arriving at St. John’s in 2005, Skirving served as rector of Bishop Cronyn Memorial Church in London, Ontario, Canada. His work in Canada provided him experience working in churches of varying sizes, from small, rural congregations to large, program-sized parishes in suburban and urban areas.

He has served on the House of Deputies State of the Church Committee and represented the Diocese of Eastern Michigan on the Province V Executive Board. He was a deputy to General Convention in 2012 and has served his diocese as dean and chair of its Commission on Ministry.

He was awarded a BA from the University of Waterloo in Ontario, Canada in 1982. He received his Master of Divinity degree from Huron University College in London, Ontario in 1986. He has completed additional course work towards advanced degrees in religious studies and congregational development at the University of Windsor, University of Notre Dame and Seabury Institute.

He and his wife Sandy have two grown children. When he can, he enjoys reading biography and historical fiction. He has also begun to learn Latin American Spanish to help in the missional partnership with the Episcopal Church in the Dominican Republic.

The Diocese of East Carolina is composed of nearly 70 parishes in 32 counties and covers the area from I-95 to the coast and from Southport up to Gatesville. The diocese is home to several major military bases, a large Hispanic community, and small congregations. The diocesan office is located in Kinston.