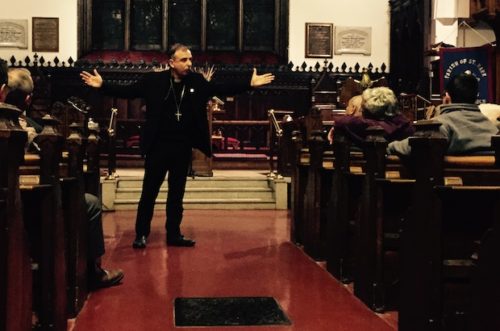 Squeezing ISIS’ source of funds is a better solution than airstrikes, the Rev. Nadim Nassar tells a gathering at St. John’s (Stone) Church. He also says”religious reconciliation” is necessary to rebuild trust in Syria and Iraq. Photo: Beatrice Paez

[Anglican Journal] The U.S.-led airstrike campaign is hardly a plausible solution to quelling the encroaching and horrific reign of Islamic State militants in Syria and Iraq, says the Rev. Nadim Nassar, the lone Syrian Anglican minister and director of the London, England-based, Christian charity, Awareness Foundation.

“It can’t be the solution because it only adds to the casualties and destruction to the region,” said Nassar, who spoke at a gathering Oct. 28 at St. John’s (Stone) Church in Saint John, New Brunswick, Canada. “The only solution is to dry out external resources that it relies on and all the veins that are feeding it.”

Military response merely provides a distraction, he said, ­­ a “show that they are doing something” —while the situation worsens daily as more than a million dollars a day is pumped into the operations of the Islamic State (known as ISIS or ISIL), a radical group of insurgents in Iraq and Syria and an offshoot of the Islamist militant organization al-Qaeda.

The alternative, said Nassar, is to pinpoint the source of its funding rather than to raise arms.

“When Western countries decided to arm Syrian opposition, they gave a signal that we do not want the war to stop,” said Nassar, adding that ISIS is counting on the war to rage on and spread to other parts of the region.

Nassar made a stop in Saint John as part of his visit to Canada, where he spoke about the hardships of imperiled religious minorities and the eroding bonds that once kept Christians and Muslims alike secure.

Nassar, who grew up in Lattakia, Syria, spoke of a time when both Christians and Muslims celebrated festivals together, worked, lived, studied and fought side by side. He lived through the seven-year civil war in Lebanon, from 1981 to 1988, and said he has faced death many times.

Today, he said, through its targeted persecution of Christians and other religious minorities, ISIS is determined to make it impossible for different sectarian groups to coexist peacefully.

Pinned on Nassar’s lapel was a tiny letter “n” in Arabic (“n” for Nazarite), symbolic of the marked life led by today’s Christians living in Iraq or Syria—the Nazarite pin has been used by ISIS, and at times former neighbors, to single out Christian minorities living amongst Muslims and destroy their homes.

“Some Muslims betrayed their neighbors and told ISIS where [their] Christian neighbors were,” he said. “Other Muslims protected them and hid them in their homes.”

ISIS’ violent attacks have raised the visibility of Christian communities in the Middle East, but he said that people sometimes neglect to recognize that the region is the birthplace of the Christian faith — and not a Western export — as extremists, and at times the West, would like to perceive.

And while the threat against Christians is mounting, he said it’s important that they not be seen as victims.

“It’s so painful when people look at me and see only a poor victim…Suddenly, we’re visible, but we’re victims,” he said. “We do not see ourselves as victims; we see ourselves as part of the tragedy of the Middle East.”

Nassar appealed to Canadians to put pressure on their government to come up with a political solution—one that involves religious reconciliation to rebuild trust—that deals with the war in Syria.

For more than three years, the Syrian war has displaced over three million Syrians from their country, with about a third of those fleeing to neighboring Lebanon—making up almost a quarter of Lebanon’s population.

A solution to the crisis in Syria, he said, is “rarely” spoken about, whether in the U.S., Canada or Europe, despite the fact that countries worldwide are not insulated from the consequences as ISIS solidifies its presence in the region.

“Proof of this can be found in the many thousands of people leaving their work, schools, families and universities to fight with ISIS,” he said.

He added that as long as ISIS’ destabilizing hold remains unchecked, “it will always export terror and bloodshed to the rest of the world.” He added, “We have the responsibility to create a counterforce that’s equal in power…”

Nassar said he is hoping to mobilize Christians far and wide (with a trip to Hong Kong planned as well) to push for much-needed engagement and dialogue among Abrahamic faiths and political and religious leaders.