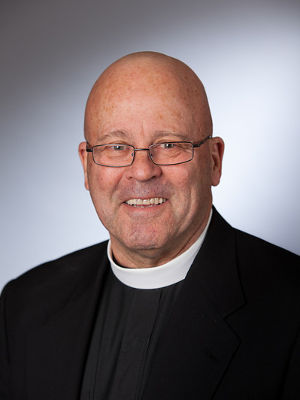 Morrison, a lawyer whose practice focuses on water and environmental law, succeeds Carol Anne Brown, who led the board since May 2013.

“Richard is a bi-vocational priest, a lawyer, a teacher and an environmentalist,” said the Very Rev. W. Mark Richardson, president and dean of CDSP. “His life and ministry exemplify one of the primary lessons we teach our students: that Christian leaders must be prepared to work toward the reign of God both within the church and the wider community.

“CDSP has been blessed by a succession of excellent board chairs. I give thanks for Carol Anne Brown, whose leadership just ended, and look forward to working closely with Richard.”

Morrison chairs the board of the Morrison Institute of Public Policy at Arizona State University, where he teaches water resources management. He has also served on the boards of the Claremont School of Theology and the former Seabury-Western Seminary.

“I think our current board is the best board I have ever worked with,” Morrison said. “I am very excited by the broad range of competencies this board presents and our ability to inform management and staff about creative options coming from the world of finance and law and other fields.”

Morrison, who has a master of arts degree from San Francisco Theological Seminary and a juris doctor from the University of Houston, said he is particularly eager to help CDSP develop its new low-residency programs that offer the master of divinity and the certificate in Anglican studies.

“It’s a pivotal time for distance learning, and while all schools are working hard to accommodate trends in the marketplace that are going to require more reliance on distance learning, one of the reasons I am so glad to be serving at CDSP today is that Mark Richardson has done a good job of preparing his faculty for the more flexible and innovative styles of teaching that this is going to require,” he said.

Morrison began his ordained ministry as a vocational deacon in 1997, working with refugees eligible to apply for asylum. “I represented them before the immigration courts as their pro bono lawyer and arranged for housing and clothing as necessary,” he says.

A decorated Navy pilot, Morrison is a trustee of the Farm Foundation in Chicago and writes and speaks on ethics and environmental sustainability.