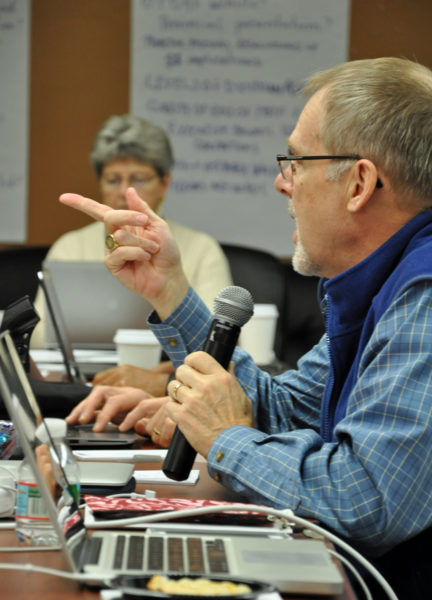 [Episcopal News Service – Linthicum Heights, Maryland] The Episcopal Church’s Joint Standing Committee on Program, Budget and Finance (PB&F) has begun the many months of work that will result in a 2016-2018 budget being proposed to the 78th General Convention in July 2015.

PB&F members spent the bulk of their Oct. 27-29 meeting getting a crash course on how the triennial budget has been constructed in the past and how the process has been changed this time around.

Both Presiding Bishop Katharine Jefferts Schori and House of Deputies President the Rev. Gay Clark Jennings were each asked to describe for PB&F members their vision for the 2016-2018 budget and the process being used to build it.

“My sense is that the churchwide budget really ought to do what we cannot do as individual dioceses,” Jefferts Schori said. “I do deeply believe that our budget ought to be based on our vision of mission. That’s who we are and who we are meant to be, that’s what God sends us into the world to be and do, to work toward the kingdom of God – a vision of shalom – to reconciling the world to God in Christ.”

Another foundation for her vision for the budget, the presiding bishop said, comes from a historic definition that says a mature Christian community is “missional in that deep sense and in doing that is self-sustaining, self-propagating and self-governing [and] not just concerned with its inward life but it is outwardly directed and doing God’s work in the world.”

Jefferts Schori outlined what she called “three broad categories” of work that she sees as most properly being done by churchwide structures.

First is service to the wider Episcopal Church, she said, which includes attending to small, new, isolated populations; responding to crises on behalf of the whole church; responding to changing realities in the church and society; helping to foster the life of other Episcopal and Anglican communities that are not yet self-sustaining; and maintaining and overseeing the church’s financial, institutional, reputational and governance legacies “so it will be fruitful in generations to come.”

The second category, Jefferts Schori said, is fostering relationships with other churches and religious communities, including relations within the Anglican Communion and ecumenical and interfaith relationships.

The third category, stewarding relationships with governments and supranational institutions, includes advocacy at the federal and state levels, the church’s work at the United Nations, development work such as that done by Episcopal Relief & Development and through other grants, and providing the ministerial endorsements required for some ministers such as chaplains.

Saying that the budgeting processes for the previous two triennia “were very difficult for a number of reasons,” Jennings said many people “longed for a more transparent, less contentious, more gospel-based budget process with ample time to do this very serious work.”

Jennings said Executive Council’s process for crafting its proposed draft of the 2016-2018 budget is “inclusive, transparent, responsive, collegial and collaborative.” She noted that a plan to release the working draft of council’s proposed draft budget is the first time she knows of where the church at large will have a chance to comment on the triennial budget at this point in its development. 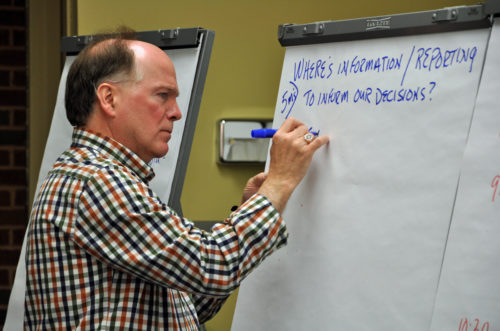 As another way to improve the overall budgeting process, the House of Deputies will handle resolutions differently during the 2015 convention, she said. There will be a Resolutions Review Committee to study pre-filed resolutions to ensure that they are consistent with polity, are in the form required by canons and to assess if they have funding implications. The committee will report on each resolution to the appropriate legislative committee chair.

And, a proposed rule revision would allow the Deputies Committee on the Dispatch of Business to schedule the flow of resolutions so that those with funding implications can be handled more quickly. The proposed change is to be voted on before the business of convention begins.

Both steps are aimed at easing the tension that develops when resolutions that have budget implications come to PB&F late in that committee’s process.

Speaking of another parallel track that will be running at convention, Jennings said she believes “PB&F needs to build a budget on what currently exists in terms of governance, structure and administration” rather than on what the Task Force for Reimagining the Episcopal Church might propose to convention and what convention might do about those proposals. If the TREC process results in major changes, then the Executive Council will have to amend the budget after convention, she said.

Jennings also told PB&F she hoped the members would listen to what the church has said about having a budget based on a smaller diocesan asking. She said she would like to see it reduced in a way that is “strategic and sensible.”

Maine Bishop Stephen Lane, PB&F vice chair, told his colleagues that their work calls them to balance listening to the church’s desires with “our own passions and commitments.”

“We will receive data from across the church… it’s not agendas, its data; listening to people [and learning] what their concerns are is [the] data,” he said. “We start with data and there will be lots of it, but eventually we take that data and make choices about it. That’s where your own visions are really critical.”

Snook told PB&F that her committee had used some basic principles for its budget process, including that the budget should be a “visionary document” based on “some high-level visioning” and that it ought to be built via a process that is as inclusive as possible.

FFM has discussed how much money to ask dioceses to contribute to the churchwide budget, Snook said, and many members acknowledged that talking about the so-called “diocesan asking” can be difficult.

The Episcopal Church’s three-year budget is funded primarily by pledges from the church’s dioceses and regional mission areas. Each year’s annual giving in the three-year budget is based on a diocese’s income two years earlier, minus $120,000. Not all dioceses pay the full asking for a variety of reasons.

A conversation at the September 2013 House of Bishops meeting, led by Hollingsworth and Lane, “affirmed what we thought all along, the discussion about the asking process is the hardest discussion to have in the church,” according to Hollingsworth.

Lane said that while diocesan response to the asking is a “source of division” among the bishops, “no diocese wants to be an outlier.”

Hollingsworth agreed, adding that “the system that we use doesn’t invite participation the way we would like it to and it is vulnerable to shame, judgment and division.”

Snook told PB&F that FFM will suggest to Executive Council that, in the next triennium, it create a diocesan asking review commission to talk to dioceses “in an inclusive and encouraging way about the fact that they don’t pay the full asking.” For instance, she said, the commission could negotiate a lower amount with dioceses whose financial challenges prevent them from fully participating.

It could also negotiate plans with dioceses that are able to pay the full asking but do not. And council could create “consequences” for those dioceses if they still choose not to participate fully, Snook suggested, such as making them ineligible to receive grants.

Jefferts Schori has asked both council members and the PB&F committee not to disclose the details of that working version because of its pending public release.

Next steps in the budget process