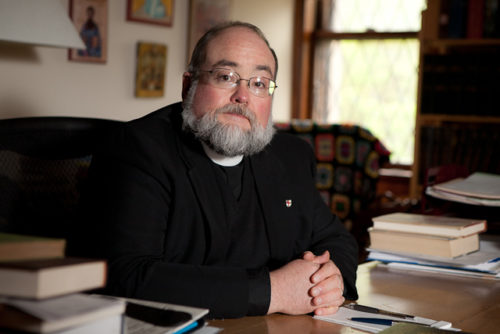 Chairman of the Board of Trustees, the Right Reverend Daniel Martins, expresses his strong support for Father Peay’s appointment:

I am completely delighted with the election of Father Peay to be our next Dean and President. He has already shown himself to be an effective leader, pastor, and scholar while a member of the Nashotah House faculty. He is intimately familiar with our operations and will be able to hit the ground running in a seamless transition from the ministry of Bishop Edward Salmon.

Father Peay’s undergraduate study of Church History led him toward monastic life, which he entered at Saint Vincent Archabbey (Latrobe, PA) in 1977. Following his first profession of vows he studied for the priesthood and after final vows was ordained deacon in 1981 and priest in 1982. The studies he began in college and pursued in seminary continued following ordination. He returned to Saint Vincent to teach as Assistant Professor of Homiletics and Historical Theology. During his tenure at the seminary he also served as Academic Dean for five years. Leaving monastic life in 1994, he devoted himself to parish work for the next fifteen years in Congregational churches in Wisconsin, while continuing to research, write, and teach in various venues. Father Peay came to Nashotah House as Adjunct Professor of Church History in 2008 and was elected to the faculty in 2010. His orders were received in August 2010, and he is now a priest of the Episcopal Diocese of Albany.

Father Peay was married to his wife Julie in 1996 and is the proud stepfather of Jeremy and Matthew.